A sweet solution to help understand how cells repair and change 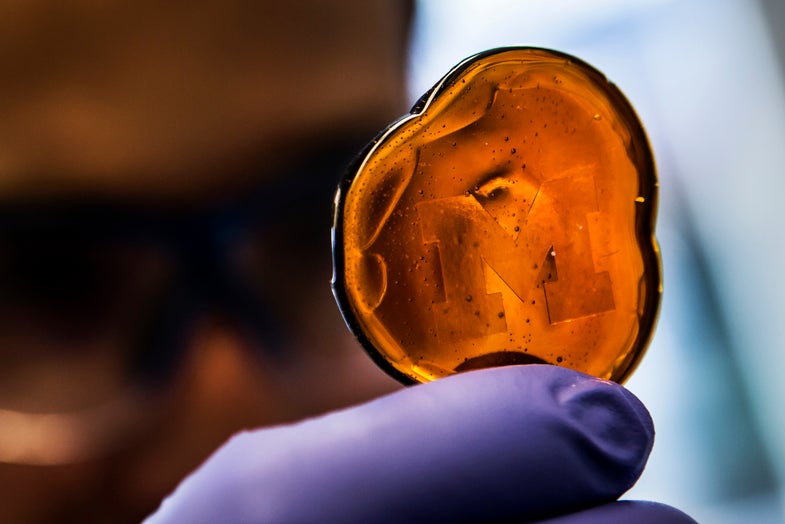 Scientists at the University of Michigan were experimenting with delicate silicone to better understand tissue scarring, but they had a problem: The molds in which the silicone needed to sit in were too hard and kept damaging the silicone. But they found a sweet solution: molds made of sugar that kept the silicone intact and could dissolve away after use, according to a recently published a paper in the journal Lab On A Chip.

In order to better understand how tissue scarring occurs on the cellular level, the researchers were testing cells inside of super-soft silicone that was less than a millimeter wide. To see how scarring might affect the individual cells, they squeezed the silicone with the cells inside to see how the hurt cells reacted and bounced back.

“We’re trying to measure the forces and movement of just a few cells,” says Shuichi Takayama, a professor of biomedical engineering at the University of Michigan, in a video from a university press release. “We could not get nice structures using conventional methods. We could mold the material but when we tried to remove the silicone from the mold, the structure would tear and rip and not hold its shape.”

What the researchers needed, he continues, was a mold that didn’t have to be peeled away from the silicone. Luckily enough, Takayama had an unlikely burst of inspiration when he tried to make cotton candy at home. He let sugar harden in a pan, and when he peeled it off, he found that the sugar retained the pan’s shape.

That ability worked perfectly for their molds. To test out their idea, the researchers poured a hot mixture of sugar and corn syrup into the shape they wanted and let it harden and cool. Next, they put the silicone medium in the sugary mold, baked the two for six hours so that the silicone sets, and then simply dissolved the mold away in a bath of warm water. The result was the silicone medium in exactly the shape they needed, ready for experimentation and chemically unaffected by the sugar.

The researchers hope to use these silicone models to understand how scarring happens both outside the body, as a result of trauma, and inside the body, which can result from conditions cancer or autoimmune diseases like fibrosis, as Smithsonian notes. Even after the body has healed, scarring can hamper organ’s function.

But this method has applications beyond the scope of the current research. By integrating soft materials more seamlessly into tiny devices and circuits, scientists may be better able to understand the tiniest developments of certain kinds of cells—for example, how cancer spreads or how stem cells differentiate into all types of cells in the body.