This is one viral video you may not want to imitate 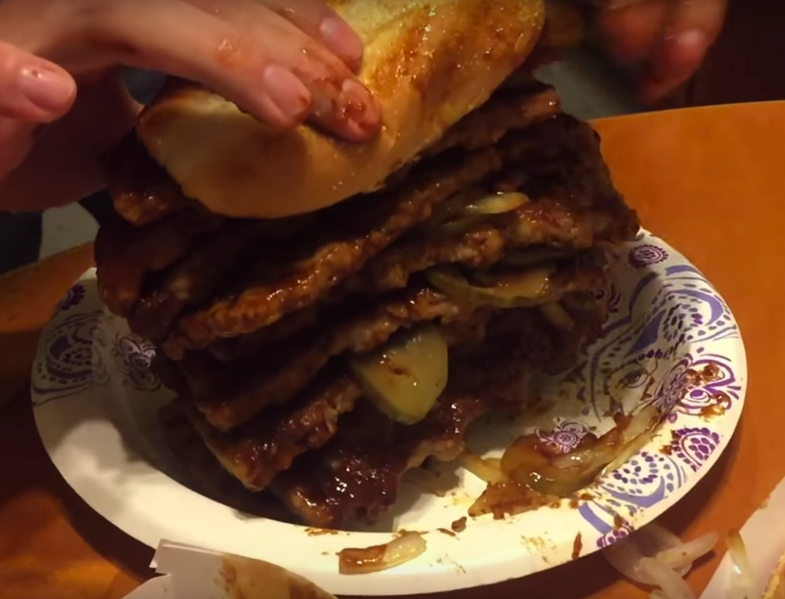 Just like Christmastime, McRib season happens only once per year. That ephemerality (plus the promise of deliciousness) was enough motivation for YouTube star Michael Jones to do something that fast-food teetotalers might call extreme—he made what he calls a “McRib stack,” a sandwich consisting of the inside of 10 McRib sandwiches crammed between two paltry-seeming slices of bread. Most people know the risks of eating too much fast food over a long period—obesity, heart disease, increased blood pressure—but what happens to the body when you consume a ton of fast food all at once?

One McRib sandwich contains 500 calories, which is 40 percent of the daily recommended value of fat (24 grams), and 41 percent of the daily value for sodium (980 milligrams). That’s all just slightly less than a Big Mac, and about half of the calories, fat, and sodium in a Burger King Double Whopper with cheese. But by most measures, the sandwich isn’t considered healthy. The sandwich Jones consumed had 10 times the calories, fat, and sodium, and was the equivalent nutritional value of several days’ worth of a healthy diet, depending on how you measure it.

If you eat 10 McRib sandwiches, the first thing that will probably happen is that you will feel ill, says Leslie Bonci, a registered dietician based in Pittsburgh. The levels of triglycerides, or fat in your blood, will spike—elevated triglycerides are a secondary risk factor for heart disease, “no matter if you’re 82 or 22,” Bonci says. So much food at once will also raise your blood pressure. “When you consume all that at once, it puts the body in a state of stress,” Bonci says. The sodium will make you thirsty but prevent your gut from absorbing the water, making you bloated and puffy. If you have a history of acid reflux, you’re going to be pounding the antacids for a few hours at least, Bonci says, because of all the fat you’re consuming. And if you have pancreatitis, the last thing you’d want to do is overload your system with that much fat and sodium.

Luckily, just one sandwich probably won’t have many permanent effects. If you step on the scale the next day and see a big increase, it’s probably mostly water. The discomfort will likely cease after about 24 hours.

If you’re dying to get your hands on a McRib (or 10), Bonci suggests consuming in moderation. Just have one, and freeze the rest to eat once the McRib is gone from restaurants yet again. Or better yet, bring nine friends to share the 10 sandwiches with you. “Just because a sandwich is a bargain for your wallet doesn’t mean it’s a bargain for your body,” Bonci says.