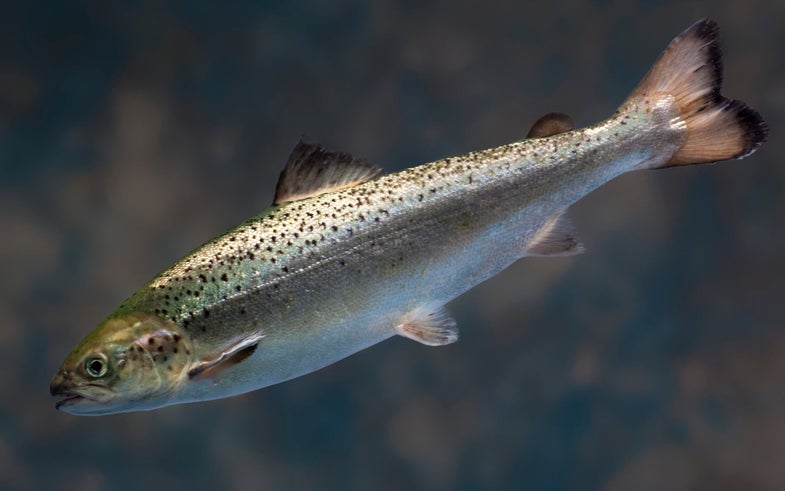 On November 19th, the Food and Drug Administration announced its approval of AquAdvantage salmon, a farm-raised fish from the company AquaBounty Technologies that’s genetically engineered to grow more quickly than conventional fish. The regulatory decision took nearly two decades, and marks the first GMO animal approved for human consumption in the United States.

The move has, unsurprisingly, raised questions among consumers (and it’s drawn at least one lawsuit).

Here are eight of those questions, answered.

The AquAdvantage is an Atlantic salmon engineered with a growth hormone gene from a Chinook, a Pacific salmon, and a promoter from an ocean pout. The hormone produced by the Chinook gene is actually the same that would appear in an Atlantic salmon—the Chinook just happened to be on hand when scientists first made the fish back in the late eighties. The promoter essentially triggers the growth hormone and keeps it turned on year-round (most Atlantic salmon only grow under certain environmental conditions, and would usually stop growing in the cold dark days of winter).

The AquAdvantage grows about twice as fast its conventional counterpart on around 20 to 25 percent less feed. According to Ron Stotish, AquaBounty’s president and CEO, this accelerated growth makes it possible for the fish to be raised entirely in land-based aquaculture.

Is it safe to eat?

In 2010, the FDA determined that the fish is as safe as regular Atlantic salmon. To reach this conclusion, the agency considered data from AquaBounty, as well as peer-reviewed research. FDA spokesperson Juli Putnam says of the review: “The data demonstrated that the inserted genes remained stable over several generations of fish, that food from the GE salmon is safe to eat by humans and animals, that the genetic engineering is safe for the fish, and the salmon meets the sponsor’s claim about faster growth.” The original application for the fish is available here.

Is it safe for the environment?

Under the narrow limits set by the FDA approval: probably. The main worry is whether the AquAdvantage salmon could escape and, if so, would breed or compete with wild Atlantic salmon or closely-related fish like the brown trout.

AquaBounty does have several redundant barriers to prevent that, which are geographical, physical, and reproductive. The fish are produced far from the waters where wild Atlantic salmon typically live; the facilities have multiple screens and filters to thwart escape; and the fish are, for the most part, sterile females that wouldn’t be able to reproduce. AquaBounty accomplished this last feat by engineering the fish to be triploid (three copies per chromosome set, rather than the usual two), which means it can’t produce reproductive cells.

Still, there are some potential flaws. The sterilization isn’t perfect, and roughly one percent of the females will still be able to reproduce. “If these fish were to escape from aquaculture operations and breed in the wild, they could pass on their genes to a new generation of Atlantic salmon,” says Eric Hallerman, a population geneticist and fish expert at Virginia Tech who consulted on the potential environmental impact for the FDA. “And that’s not something that we want—many Atlantic salmon are imperiled to various degrees.”

Hallerman points out that this is why the FDA only approved the fish for the specific, multi-barrier facilities that AquaBounty currently has in place. Still, the possibility of future unfettered expansion is a concern critic’s of the way the FDA handled the fish’s approval, including Anne Kapuscinski, a sustainability scientist and expert in fish genetics and aquaculture from Dartmouth College. “I’m quite worried that the weak standard set here will open the floodgate in other countries, where the regulations won’t be all that rigorous, and the fish could escape from those places,” she says. “And it would be initially hard to detect.”

Stotish says the company has no current plans to open new facilities or license its technology.

Wait a minute. Why is the FDA involved in environmental safety regulation?

Good question. The fish, like any other genetically-engineered animal, is regulated under the animal drug provisions of the FDA’s Federal Food, Drug, and Cosmetic Act. It may not make sense, but it’s one of many such head-scratching aspects of biotechnology regulation, which were slapped together starting in the eighties—a result of lawmakers looking to regulate the products under existing laws, rather than tailoring new ones. This may change. Last summer, the White House announced a review of this system, which many experts believe is insufficient and outdated.

Will the fish be grown in the U.S.?

For now, no, it won’t. The FDA’s approval is limited to two facilities: a hatchery in Canada and a production facility in Panama. In order to expand to new facilities, AquaBounty will have to submit a supplemental application to the FDA, which essentially asks to make a change to an existing approved application.

During the original application, the company asked the FDA to open part of the process to public comment—a step that isn’t legally required by the FDA drug approval process. The company decided to do this, says Stotish, “in the spirit of transparency and political correctness in the hope that it would engender public confidence.”

“And guess what?” he adds, “It was a useless exercise.”

Whether the company will choose to keep the process public for the supplemental applications, should it decide to expand into the U.S. or elsewhere, is unclear. “We would do whatever is required, and we would do the right thing,” says Stotish.

Will the fish be labeled?

Much to the outrage of label-advocates and anti-GMO activists, the FDA will not require a special label indicating that the fish is generically engineered. As for voluntary labeling, it’s too early to tell. The company may eventually opt for positive labels, according to Stotish. For example, the AquAdvantage salmon won’t need antibiotics, a treatment that many consumers want to avoid. And don’t be surprised if you see a flurry of GMO-Free salmon labels on competitor’s products, even before AquAdvantage hits the market.

Okay great, then how will I know if I’m eating this fish?

You probably won’t have a chance until at least 2017, because it’s going to take awhile for the company to ramp up production (the approval took the company by surprise). Even then, the fish will likely only be a specialty item. To put it in perspective, from 2000 to 2004, the most recent data I could find, Americans ate an average of 284,000 metric tons of salmon each year. In 2005, according to the same source, we were importing around 200,000 tons of farmed salmon. The Panama facility can produce around 100 tons of AquAdvantage salmon.

What does the FDA’s decision mean for more other genetically-engineered animals—are we going to see faster FDA approvals?

Maybe. Most experts I spoke with think this will be the case. But the FDA was tight-lipped on the topic. Putnam responded: “The agency reviews each application on a case-by-case basis, and its own merits in order to determine whether the product is effective, safe for the animal and, in the case of applications for GE food animals, is safe for humans and animals to eat.”