But don't fire your doctor yet 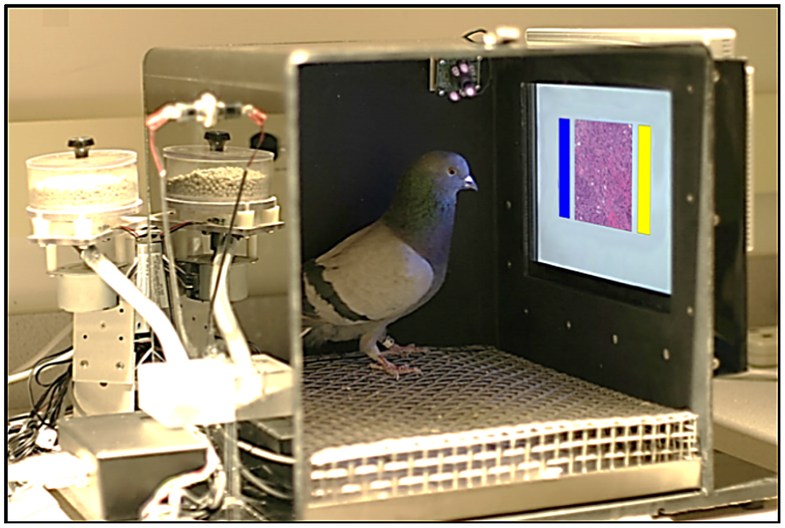 Diagnosing cancer can be a challenging task. Often, pathologists have to quickly decide whether a microscopic group of cells looks malignant or benign, or whether a small lump seen on a mammogram is suspicious. For this reason, pathologists go through four years and more of medical school and training. But it turns out that pigeons may one day be able to help out.

Researchers at the University of California, Davis and the University of Iowa wanted to understand how pathologists are able to refine their cancer-identification skills over time, and what are the most important features and properties that help them make an accurate diagnosis. To figure it out, the scientists trained pigeons to distinguish between healthy and malignant tissue, since humans and pigeons share many of the same visual systems. And the pigeons were surprisingly good at it, according to a study published today in PLOS One.

During the experiment, the scientists showed each pigeon a set of microscopic images of breast tissue. After staring at the image, the pigeon would then chose either a yellow- or blue-colored button that corresponded to either cancerous or non-cancerous. If the pigeon answered correctly, it was rewarded with a tasty treat. Each pigeon had 15 one-hour long sessions and by the end, they answered correctly about 85 percent of the time. Human pathologists are up to 97 percent accurate for more a difficult identification task where they were shown whole images instead of just small areas of interest.

In another task, in which the pigeons were asked to detect cancerous breast masses on mammograms, the pigeons were only able to memorize the correct answer–they couldn’t look at a new image and determine whether that mass was cancerous or benign. This is challenging task for even a group of pathologists who (as part of the study), viewed the same masses, and were only accurate 80 percent of the time.

While the pigeons’ results are impressive, they still aren’t as accurate as those of a trained pathologist. So, pigeons won’t become newly minted doctors anytime soon, but they can help researchers understand how pathologists get better overtime. The researchers found that while the color scheme and brightness of the images had little effect on the accuracy of the diagnosis (the researchers note that this makes sense since most pathology textbooks have until recently been in gray scale), they found that the birds were affected by how much the image had been compressed. At first, their accuracy was worse with highly compressed images; however, overtime, they were able to adapt to the compressibility and their results became more accurate. As the researchers note, this correlates with how pathologists learn overtime: “Humans can also learn to ignore compression artifacts and become accustomed to less-than-perfect visual images.”

So by figuring out what pigeons look at to make their diagnosis, that may allow researchers to train pathologists and computer systems in a better, more strategic way.