This Startup Wants To Put The ‘Medical’ Back In Marijuana

Potbotics wants to give patients better information, but can they when the science is limited? 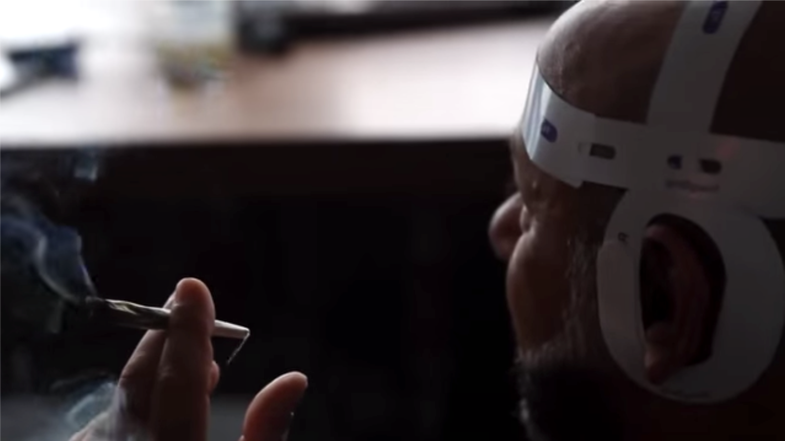 Even if you’ve never tried marijuana, you might have heard of a strain called white widow. It’s among the most popular in the world (it won the so-called “Cannabis Cup” in 1995) because it elicits “a powerful burst of euphoria and energy… stimulating both conversation and creativity,” according to leafly.com, a website dedicated to recreational marijuana reviews.

That’s great information for recreational marijuana users looking to pick a good strain, but it’s not very helpful for, say, a fibromyalgia patient purchasing cannabis to treat chronic pain. When those patients visit a medical marijuana dispensary, they usually pick a strain they’ve heard of, or based on suggestions from the “budtender” behind the counter, usually based on anecdotes from past customers.

But a new startup called PotBotics wants to make it even easier and more reliable for medical marijuana patients to know exactly what’s in their bud. “We wanted to give patients a more quantified means for understanding what they’re purchasing,” says David Goldstein, the co-founder and CEO of PotBotics.

The technology-focused company plans to do this in several ways that aim to present patients with measurable, specific therapeutic elements; one of its endeavors, called PotBot, launches online this week. But as leading marijuana researchers in the United States still have more questions than answers when it comes to the medicinal effects of certain strains, how much of PotBotics’ goal is even possible?

The murky science of medical marijuana

At this moment in history, marijuana occupies a strange position in the intersection of culture, law, and science. More people are smoking marijuana recreationally—a recent survey reported the number of smokers has doubled between 2002 and 2013.

There’s less shame or stigma surrounding marijuana use than there has ever been. Little by little, state laws are starting to reflect this cultural shift—as of the time of writing, 23 states and Washington, D.C. have legalized the use of medical marijuana, and recreational marijuana is legal in four of these. This week Mexico’s supreme court opened the door to nationwide marijuana legalization, and some believe the United States may be (slowly) following suit.

And yet, from a scientific perspective, marijuana remains little understood. For decades, the federal government has put so much bureaucratic red tape between scientists and cannabis that, even under the best circumstances, it takes years for research to get underway. Though the United States has some of the best research in the world, when it comes to marijuana we lag woefully behind countries like Israel and Canada. In the end, that means patients aren’t benefitting from marijuana’s yet undiscovered medicinal qualities.

“This is a unique situation where cannabis is on the market before the research has been done to demonstrate safety and effectiveness,” says Ryan Vandrey, a professor of psychiatry and behavioral sciences at Johns Hopkins University who has studied medicinal marijuana. “Scientists are trying to play catch-up and adapt the research questions to what’s already out there.”

One of those big research questions is about cannabinoids, chemical compounds in marijuana that lock into the external membranes of neurons and elicit effects from many of the body’s systems. THC is the most famous of these cannabinoids, but there are several others, such as CBD and CBG.

While recreational users have developed a comprehensive body of anecdotal knowledge about the effects of these different cannabinoids (some have more psychoactive effects, others make you feel sleepy), scientific evaluations of how these cannabinoids affect the body’s various systems are still fairly basic and limited. Knowing more about them could show scientists which strains of marijuana, with their varying cannabinoid components, could be used to treat different medical conditions. CBD, for example, makes you sleepy and is sometimes used to treat insomnia, but studies have shown that in moderate doses CBD in fact promote wakefulness.

What Potbotics wants to change

To the founders of Potbotics, that’s where they come in. This week the company launches PotBot, a free online tool designed to bring much of this scientific information to patients in order to help them better understand which cannabinoids are best for their specific medical conditions.

Users enter their age, weight, frequency of marijuana use, and medical condition, and the site spits out suggestions of which cannabinoid concentration and marijuana strains would be best to treat them. Each recommendation contains links to the peer-reviewed studies to support the recommendation. And in cases where information is scarce, or the supplementary studies were conducted on mice, for example—the caveats appear in a pop-up window. 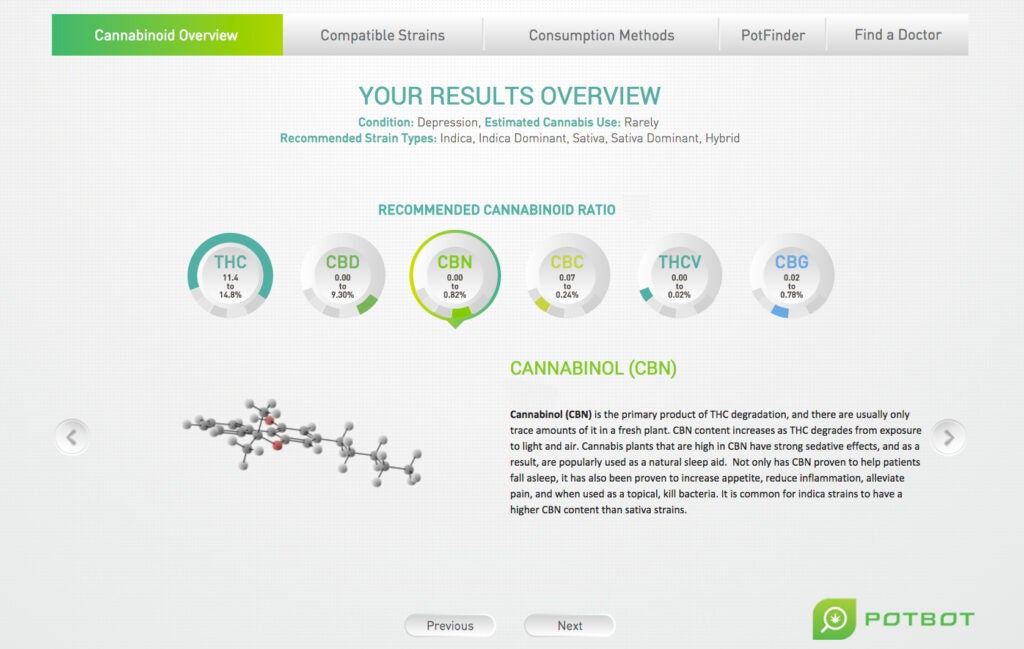 The goal, Goldstein says, is to make patients better informed when they place an order at the dispensary. “If you were to go to some of PotBot’s competitors, they focus on a strain’s recreational attributes: taste, flavor, smell,” he says. Much of that information is also anecdotal and crowd-sourced, which isn’t very useful for medical marijuana users.

There’s no regulatory body that guarantees that a given strain is the same wherever it’s obtained, so a user that purchases white widow in two different dispensaries might be getting completely different levels of cannabinoids. To make their database, the PotBotics team tested several samples of different marijuana strains, so the database contains cannabinoid ranges for each strain. By making the hard data more transparent, a PotBot user can ask the dispensary budtender about the cannabinoid value of a particular strain (it’s on the packaging for budtenders to see, Goldstein says) in order to get the one that’s most helpful for her specific condition.

It’s hard to argue against giving patients greater transparency about cannabinoids’ studied effects. Goldstein says his company has been especially targeting baby boomers that are “returning” to marijuana after experimenting with it in the 60s and 70s. “They started smoking to be anti-establishment now they’re smoking because it’s anti-inflammatory,” he says. Some might not want to be bogged down by more information than is necessary, but certainly a good number would be interested in learning more about the specific molecular components that make marijuana an effective treatment. It’s likely a self-selecting group.

But another of PotBotics’ endeavors goes a step farther, seeking to interpret marijuana’s benefits from a neurological tack. In a service called BrainBot, a doctor can recommend a patient to receive a series of electroencephalograms (EEGs), recordings of the brain’s electrical activity using electrodes stuck to the scalp, to determine the best strain of pot for his brain. The patient would visit PotBotics’ California facility three to four times, each time taking an inhaler of a specific strain of marijuana while hooked up to the EEG. PotBotics would then send the EEG readings back to the doctor, who would look for changes in certain types of brain waves that are relevant to the patient’s medical condition. A doctor might recommend a strain to an insomnia patient, for example, if the results showed less activity of beta waves, which are associated with wakefulness and attention. By using quantifiable evidence, the thought goes, patients would be able to skip the expensive process of purchasing different strains of marijuana from a dispensary before finding the one that best treats a specific medical condition.

BrainBot isn’t widely available yet, for a couple of reasons. With so much legislation pending and state-by-state variations in regulation, Goldstein is slow to expand BrainBot’s availability outside California.“We want to see the law a little more evolved before we put capital, time and effort into developing [BrainBot] in New York,” he says.

And although the FDA has approved the EEG as a medical device, only the initial baseline reading (the one done before a patient has tried a marijuana strain) is covered by insurance, leaving the patient with a steep bill for each reading and the cannabis inhalers, not to mention the doctor’s visit to interpret the results.

But from a scientific perspective, BrainBot is especially fraught since so much about marijuana’s effects is simply unknown. “I would have serious reservations about the scientific claims of such an approach,” Peter McCormick, a lecturer in cell biology at the University of Anglia School of Pharmacy, told Popular Science. “The effects of smoking marijuana are much too complex to be simplified into a few EEG readings, and the range of reasons patients might want to use medical marijuana [are] far too vast to suggest one readout can provide medical guidance for all patients.”

“I am certainly skeptical of the device you describe,” Vandrey, the Johns Hopkins professor, adds. “There is currently little/no scientific data that exists to link specific strains to certain medical conditions; in most cases, there is variability of plant constituents within a given strain.” The science hasn’t caught up with PotBotics’ mission–different strains of marijuana haven’t been shown to produce different EEG results, Vandrey says, and an EEG isn’t even the primary method of measurement for many of the conditions that medical marijuana treats, such as glaucoma and Crohn’s disease. “All in all, I think this is a bit far fetched, but good data is the best way to make a case for something like this,” he says.

Goldstein hopes that information gathered from BrainBot can be used to further scientific research into marijuana’s neurological effects; he says the company has been in talks with several institutions in the U.S., Canada, and Israel that may use the data in their studies, though nothing has been formalized yet.

In the end, there’s nothing wrong with giving patients more information about the known therapeutic elements of marijuana, as PotBot does. But it’s important to communicate the limitations of that knowledge, too, and when the science is cloudier, so are the benefits for patients.

The clamor for reform of regulations surrounding marijuana research has become much louder in recent years thanks to disparate groups including researchers, entrepreneurs, and politicians.

“Expanding the ability to do research would be really exciting,” Goldstein says. No matter which way the legislative tide is turning, marijuana research seems to be picking up steam—a spokesperson from the National Institute on Drug Abuse growing facility in Mississippi, the only place in the country that produces marijuana for research purposes, told me that demand for marijuana has exploded in recent years.

PotBotics hopes to have a place in that shift by making cannabis science more accessible to medical marijuana users. In the future, PotBotics hopes to incorporate the EEG data as well as more patient feedback into their database; as several states are slated to vote on legislation that could legalize medical marijuana in the next year, that information might soon become relevant to thousands more Americans.

Goldstein is confident that legal reform will happen soon, and research will follow. “[That shift will] make cannabis use more scientific with less guessing, and that’s our mission statement—to create a place where cannabis is treated like any other medicinal substance.”