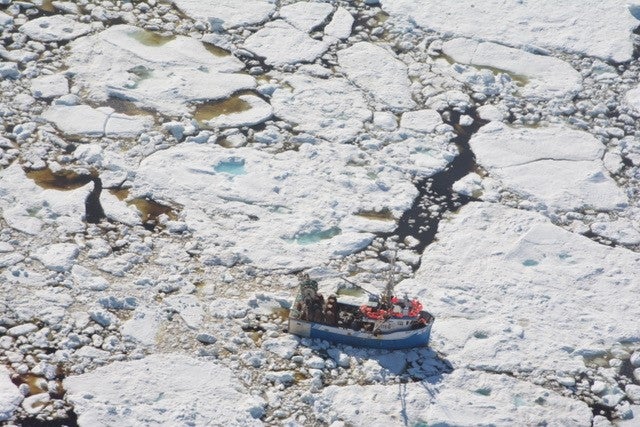 A crab fishing boat surrounded by ice off the coast of Newfoundland in 2017. David G. Barber
SHARE

Off the northeastern coast of Newfoundland, Canada, sea ice is a normal sight between January and May. The icy coating, usually about 20 inches thick, typically disappears as it gets warmer—letting cargo ships, ferries, and fishing vessels cut through the waters for a few months.

But not last year. In 2017, ice up to 19 feet thick stayed pressed close to shore, even into May and June. Two fishing vessels sank in the crush of cold, old ice, and other ships in the area faced hazards rarely seen before. Unfortunately, a new study suggests those conditions will become more common in the future, with a warmer Arctic leading to thicker ice farther south.

At the same time the ice remained wrapped around the coast of Newfoundland, the Canadian Coast Guard Ship, Amundsen—an icebreaker—was headed north from Quebec City toward Hudson Bay, carrying scientists and equipment ready to examine the interactions between freshwater and seawater.

But the waters and ice in Hudson Bay would have to wait. The vessel’s capabilities were needed back in Newfoundland, where ice was persisting for far longer than it normally would and putting mariners at risk. The ship, the only icebreaker available, could clear a safe path for ferries and rescue trapped passengers. That put the scientific mission on hold, leading to headlines that proclaimed “Climate change researchers cancel expedition because of climate change.”

But all hope was not lost. In between the Coast Guard’s missions, the researchers still onboard decided to make the best of their detour. They got to work, collecting data on the freeze that had waylaid so many people that summer.

“We started to think; we’re sea ice scientists on a fully outfitted icebreaker with all the sea ice equipment you could possibly need to study a sea ice area. Why don’t we study this area while we’re here?” says David Babb, one of the research scientists who was on the ship. Over the course of two weeks they disembarked on three large ice floes, took samples and measurements, and snapped aerial images of the ice from both the coast guard helicopter and a drone they had onboard.

Their research came out recently in Geophysical Research Letters. It’s a snapshot of a world where more and more companies seek to take advantage of reduced ice cover in the Arctic, hoping to use the newly-open waters as a faster way to ship goods or people.

“Yes, the Arctic is opening up in a sense,” says Walt Meier, Senior Research Scientist at the National Snow and Ice Data Center, who was not involved in the study. “That opens up a lot of possibilities for exploitation of the Arctic, whether that’s shipping or resource extraction. But in some respects it makes thing more uncertain, because the ice is much more mobile. Even though there’s a lot more open water at certain times of year, you still have to be careful of the local and regional conditions. Even though overall it’s low, it may be high in certain areas. In some ways the decreasing ice cover is making things more dangerous.”

The samples taken during the study didn’t show the ice typically seen off the coast of Newfoundland, which builds up and melts within one year. This was multi-year ice, which had journeyed down from the High Arctic through narrow straits of ocean normally sealed by—you guessed it—more ice.

But in 2017, this frozen blockade (called an ‘ice arch’) broke apart earlier than usual in the Nares Strait, a thin channel between Ellesmere Island and Greenland. And the arch didn’t form in the first place until January, allowing thicker stuff from the Arctic and the Lincoln sea to flow south on their 1,864 mile journey towards shipping lanes during the fall.

This, in and of itself, isn’t that unusual. The area just north of the Nares Strait is where the thickest ice in the Arctic tends to pile up, and before the ice arch forms, with ice jostling and pushing to get through the narrow passage, some of that thick ice manages to slip through every year. Its just that as the sea ice in the Arctic has thinned its gotten weaker, and is more easily pushed around by the whims of wind and ocean currents. That means it moves faster, and can travel farther before it melts.

Last year’s event is not even the most extreme case of ice coming down from the Arctic through these pathways. In 2007, the ice arch across the Nares Strait didn’t form at all, allowing a huge influx to flow south. That year still holds the record for the sheer amount of long-lived, multi-year ice to make it through those southerly passages, but 2017 has it beat in other ways. Last year the ice stuck around the Newfoundland coast until June 26—the latest since 1997, when Canada started using radar satellite data to get a view of the sea ice cover.

Spring storms made the problem even worse. Normally, multi-year ice that makes it through the channel stays further offshore, melting by the time it makes its slow way south. Two storms in March broke up some of the sea ice off the coast, sending hundreds of icebergs down into shipping lanes, and also compressing the thicker sea ice toward the shores of Newfoundland.

Even for Meier, who studies the flow of sea ice, this was an illuminating case study. “I recognize the ice can flow hundreds of kilometers. But it hadn’t really occurred to me that you could have something like in June, where the ice is thick enough and piled up together enough that it could go all that way—and cause such a significant issue that far away from the source.”

Sadly, this might become more common in the future. As the authors conclude in the paper “Thicker sea ice may become more present at southerly latitudes as ice flux increases through straits that have historically been seasonally blocked by ice arches—a counterintuitive outcome of a warming Arctic and diminishing ice cover.”

Warming temperatures in the Arctic can lead to changes further south, including—however oddly—colder winters and ice-clogged seas. Even after the multi-year ice disappears, as long as there is a seasonal ice cover, the movements of wind and currents could push thinner coatings of ice into thicker, and still hazardous ridges.

“This is something we need to better prepare for in the future,” lead study author David Berber said in a statement. “We expect this phenomenon to go on for at least a couple more decades as we transition to an ice-free Arctic in the summer.”