We share more than just a bond with our canine friends. 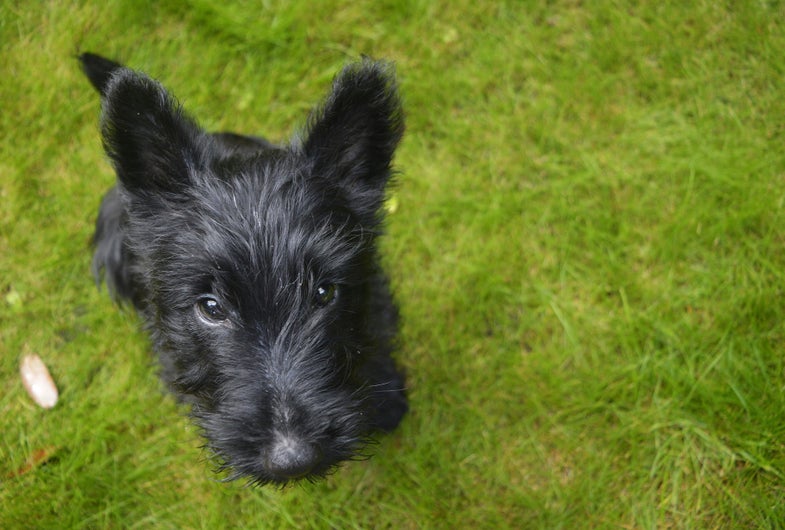 The idea of a dog helping to find a cure for cancer probably conjures images of golden retrievers sniffing blood samples and sitting dutifully in front of the cancerous specimen. But though their noses are valuable, there’s something much more useful hidden inside purebred pups: their own tumors.

Roughly a quarter of all purebred dogs die of cancer, and 45 percent of those who live past the age of 10 succumb to one variety or another. Modern chemotherapies have allowed some of these dogs to get treatment, just like a human would. Those therapies work so well because canine cancers are so close to human tumors.

“For the most part, dogs get everything we do,” says Elaine Ostrander, a distinguished investigator at the National Institutes of Health and chief of its Cancer Genetics and Comparative Genomics Branch. “You see some striking similarities that you don’t see in mice or other animal models, and that makes them an increasingly terrific system to study the genetic basis of disease.”

Dogs aren’t just an excellent disease model because they happen to get the same cancers. They’re also incredibly genetically similar to one another. Why? Because we’ve bred them that way.

Most purebred dogs are so inbred that we might as well be mating siblings at this point. The offspring of two siblings would have an inbreeding coefficient (a measure of how varied an organism’s genes are) of 0.25, and the vast majority of all possible purebred pairings have a coefficient above that mark. This isn’t great for disease risk, since otherwise rare disorders can easily become common when you have a small, closed gene pool, but it’s excellent if you want to study cancer genetics.

Many breeds are uniquely susceptible to specific types of cancer purely because of their heritage. “If you’re a Scottish terrier, your odds of getting bladder cancer are 22 times higher than your average mutt,” explains Ostrander. That’s a massively increased risk, and it’s likely because of a set of inherited mutations that we’ve inadvertently bred into the group. But the fact that they’re all likely to have almost exactly the same mutation makes them a convenient sample for research.

Humans are often way too genetically varied to trace cancers back to inherited mutations, even for the 55-ish percent of cancers that aren’t due to human habits. There are a few notable examples—the BRCA mutations for breast cancer, and an APC mutation for colorectal cancer are two of the most famous. But the mutation has to lead to such a strong familial pattern of disease that you can look at a small, fairly genetically similar group like a family. When that happens in humans, modern sequencing methods make it easy to pick out which gene or genes have the mutation.

But because all purebred dogs are as related to one another as we are to our immediate family members, every cancer they get is similar to the hereditary human cancers we already know about.

Take squamous cell carcinoma of the digit, for example. Squamous cells are skin cells, and the carcinomas that arise from them in dog digits are incredibly common among a few select breeds: giant schnauzers, Gordon setters, Briards, Kerry blue terriers, and black standard poodles. All of these dogs are prone to squamous cell cancers because they carry the same founder mutation— it produces too many copies of the gene KITL.

Not all dog cancers stem from a founder mutation. Some seem to have a shared susceptibility.

Osteosarcomas, for instance, are a type of bone cancer that are fairly rare in humans, but many of the long-limbed breeds—Irish wolfhounds, great Danes, and Scottish deerhounds, to name a few—get them frequently. This is probably because the shared genetic heritage that gives these pups their elegant legs also gives them a shared predisposition to the disease. So researchers decided to see whether these dogs had mutations in common. As it turns out, they often have mutations in two genes called IL-8 and SLC1A3, both of which are known to cause some of the more malignant forms of human osteosarcoma. Now researchers can focus in on just those two genes to figure out exactly how osteosarcoma forms and progresses, rather than sift through many thousands.

Ostrander’s group focuses on three other diseases: gastric cancer, histiocytic sarcoma, and bladder cancer. “We’ve been interested in bladder cancer because a small number of breeds are at super high risk,” she explains, “and gastric cancer because it’s so lethal in both humans and dogs. In humans, it’s months from diagnosis to death. In dogs it can be a few days to weeks.” Both types of cancer affect certain breeds to a high degree, but don’t appear at all in most other dogs.

Histiocytic sarcoma, the third cancer in Ostrander’s focus group, is exceedingly rare in humans. But a quarter of all Bernese mountain dogs get it, as do 20 percent of flat-coated retrievers. These cancers arise from blood cells, and they seem to have developed separately in each breed. The specific pattern of disease—where it originates, how far the tumors spread—is different in Bernese and retrievers, even though it’s the same type of cancer. Bernese get tumors in the spleen, lungs, and liver, while retrievers get it in joints and muscles.

This isn’t so useful for humans, since it’s such a rare form of cancer, but it is useful for understanding how cellular mutations affect disease progression. Two breeds, same cancer, distinct progressions: whatever’s different is likely causing the difference in progression. “We’ve been fascinated by that,” Ostrander says, “because we know it’s different genes for Bernese and flat-coated retrievers.” With more study, those genes might prove to be crucial in directing which bits of the body are most susceptible to cancer.

Once we study purebreds more, researchers like Ostrander hope we’ll be able to find novel ways to treat human cancers. Dogs can help out there, too.

Mouse models of cancer often aren’t helpful for testing new therapies, because what works in mice won’t necessarily work in humans. “Mice are so limited,” says Ostrander, because mice simply don’t get cancer the way we do. To study them, we usually induce cancer in particular parts of their body, which is useful for performing precise experiments and understanding very particular genes. But a breast cancer with only one induced mutation isn’t anything like a naturally occurring breast cancer, which has at least a few more genetic anomalies driving its progression.

But dogs, unlike rodents, get these cancers naturally—or at least, as naturally as an inbred population can get them.

That means treatments that work on canine cancers often also work in humans. And that’s great news for both of us. So much of animal work in labs necessarily involves giving a creature cancer only to try to cure it. Dogs already have cancer—so any research we do on them will help their outcome, too.