But we’ll never get them out of the ground. 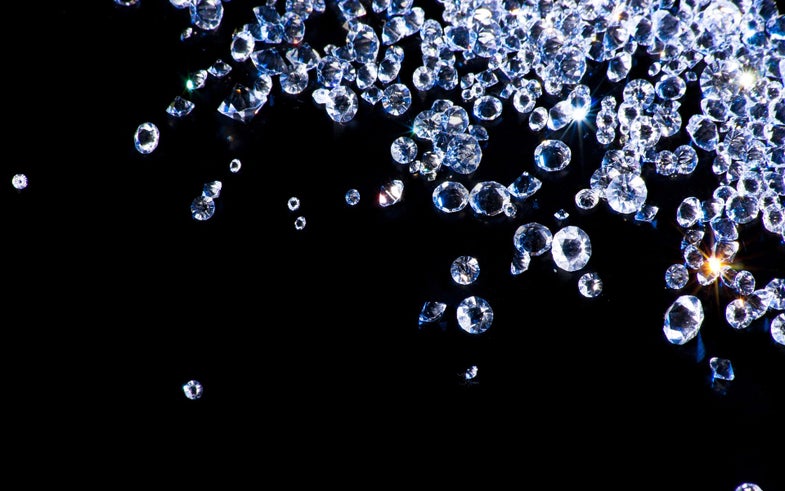 Despite their incredible reputation for being exquisitely rare and valuable, diamonds are more common than you might think. Other planets, like Uranus, are probably chock full of them. They’re floating around on some space rocks even right now. As it turns out, us Earthlings might be sitting on top of a motherlode of diamonds — one quadrillion tons, actually.

Over 100 miles under the Earth’s surface is a section of geology known as cratonic roots. They sit beneath what geologists call a craton, the oldest, most stable section of rock within a continent. Some reach deep into the interior of the Earth—capable of stretching down as much as 200 miles deep, through the outer crust and into the planet’s mantle —hence the “roots” label.

“Cratons are intimately associated with the some of the most significant events in Earth history, such as the initiation of plate tectonics and the formation of the continents,” says Joshua Garber, a postdoc at Penn State University and the lead author of the new study. “They have been stable since the Archean Eon, at least 2.5 billion years ago, so they’ve had plenty of time for lots of happen to them…they’ve been chemically stewing in that mantle for a long time.” The findings fold into a larger effort to understand the history and processes in the superficial and deep mantle regions of the earth.

In a new paper published in Geochemistry, Geophysics, Geosystems this week, an international team of researchers estimates that about 1 to 2 percent of the Earth’s cratonic roots are made of diamond. That might seem like a small amount, but that tiny fraction is makes up enough of these massive geological formations to account for a quadrillion tons of diamonds. That’s the number 1 followed by 15 zeros!

The research team wasn’t looking for shiny gems when it made this discovery. For years now, scientists have collected an enormous amount of data pertaining to the seismic activity of the Earth. That data can be used to create a sort of 3D dimensional map that outlines what the Earth’s insides look like.

But not all seismic data adds up equally. Much of it is made using sound wave measurements emanating from the Earth after they are triggered by earthquakes, explosions, and other events. These sound waves (also called shear velocities or frictional velocities) travel at different speeds depending on the type and temperature of the material they’re moving through, and so they move faster through the roots of ancient cratons since they are colder and less dense than the surrounding mantle rock. But the shear velocities are speeding through craton roots at higher than expected velocities.

“Such high shear velocities would be expected if temperatures are much colder than average at that depth,” says Barbara Romanowicz, a coauthor of the new study and a seismology researcher at the University of California, Berkeley. “But you would need unrealistically low temperatures compared to what we know about those regions of the mantle, for standard rock compositions.”

The team wanted to know what would account for the unusually quick velocity readings. They began their investigation by using the data they had to create a 3D model of the seismic waves zipping through the craton roots, followed by laboratory tests of sound waves traveling through various earthly mineral combinations, heated to temperature profiles one would expect to find in the craton roots.

Cratons are predominately made up of peridotite, but can’t exhibit high shear velocities. There were only two other minerals that exist in earth’s mantle that could have explained the speeds: eclogite (subducted oceanic crust descending into the mantle zone), and diamond.

The only rock structures in the lab tests that accounted for the speeds observed in nature possessed just a sprinkling of diamonds—1 to 2 percent. That was enough to reconcile the discrepancies in the sound wave data, without affecting the overall measured densities of the craton roots.

While the findings are a bit unexpected, they make tons of sense (though maybe not quadrillion tons worth of sense). “Diamond is a really attractive answer because it is so much stiffer than most other minerals,” says Garber. “One outcome of this study is that, if the answer is not diamond, there has be quite a bit more of some other stiff constituent besides diamond that we have even less evidence for.”

In addition, Romanowicz says it’s possible the craton diamonds could come from carbon-containing fluids rising up from subducted slabs (diamonds are essentially stable forms of carbon, created by extremely high temperatures and pressures).

But don’t get too excited now: you will never, ever see these pretty rocks in the flesh. Again, they’re located over 100 miles underground — “that is about 10 times deeper than the deepest hole ever drilled into a continent,” says Romanowicz. “Drill bits get used up very quickly and soften as you attain high temperatures in excess of several hundred degrees Celsius, and even cooling by water injection is not enough to compensate. I frankly don’t think this is going to happen any time soon.”

“On the other hand,” she continues, “diamonds do come up to the surface carried by ancient volcanism. And there may be more out there than has already been found,” given what the findings suggest, “so there is hope there.” We might just have to be patient, but when it comes to time on a geological scale, that sort of patience might have to endure beyond our species’ own existence, let alone our own current lifetimes.

Moreover, would you really want to? If there a quadrillion tons of diamonds being passed around on the surface of the Earth, these gems suddenly wouldn’t seem as precious as they do now. Diamonds would probably become as valuable as a copper penny. (Although Lincoln’s face etched on the face of a diamond would definitely be a brilliant change.)