Google’s Nest Hub Max smart screen is bigger, better, and always watching (if you want it to)

It watched me eat too many cookies and do the dishes. I'm OK with it. 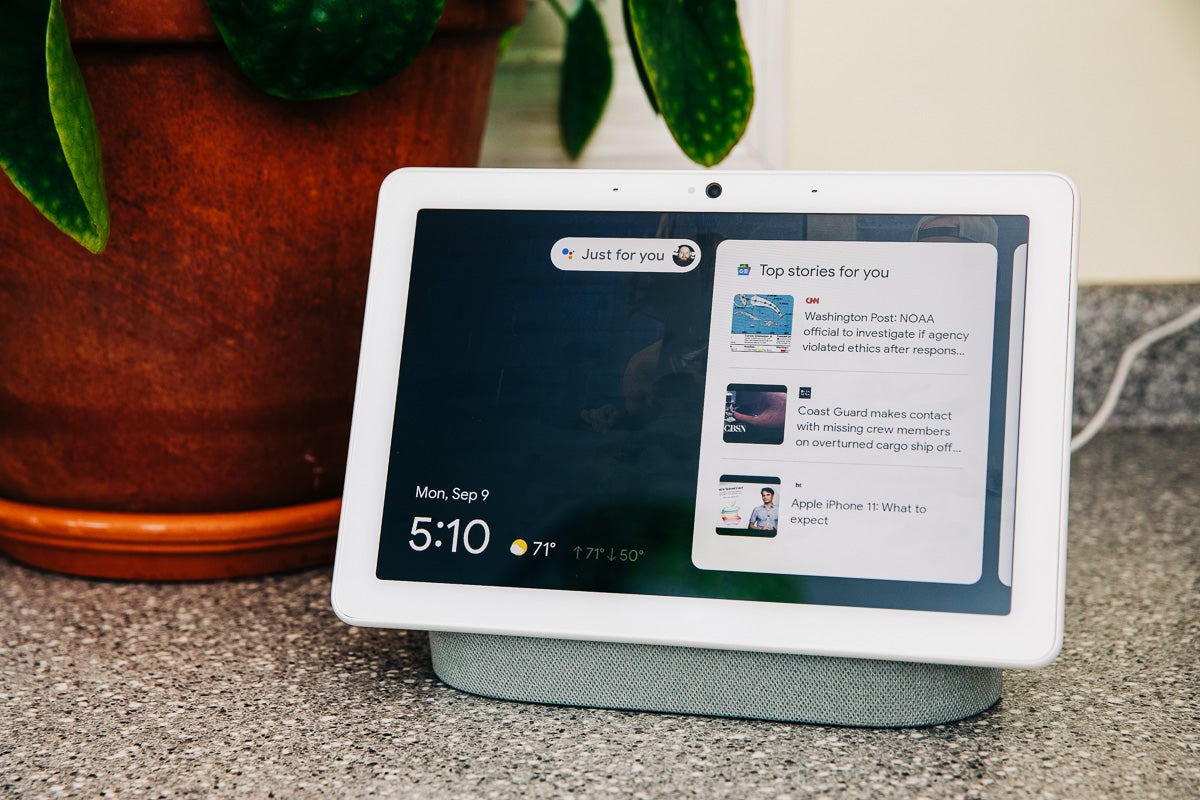 Every time I walk into my kitchen, a small picture of my face pops up on in the top-right corner of the Nest Hub Max‘s 10-inch screen. If it’s the first time it has seen me on any given day, it automatically displays the weather forecast. If I ask it for my appointments, it knows which calendar to look at. All of this works, in part, because it can see me. The built-in HD camera on the front of the $229 Nest Hub Max knows what I look like, thanks to a little training session during setup and now it’s constantly on the lookout for my mug, whether I’m doing dishes in the evening or wondering how many Halloween Oreos I can eat before anyone gets suspicious.

I like the Nest Hub Max a lot, but unlike the other smart tools around my house, it doesn’t just blend into the background.. Instead, its big glowing face—and always watching eye—is a constant reminder that it’s there and ready to help. It’s handy, but a little weird.

The Nest Hub Max is a smart screen. Google Assistant has shown up in a few of these already, including third-party models from companies like Lenovo, as well as its own first-party gadget in 2016, the Nest Hub. The original had a smaller 7-inch screen and a less-powerful speaker (as you’d expect from a physically smaller gadget); it also lacked a built-in camera. In fact, some reviewers touted the lack of an imaging device as a positive security feature that gave it an edge over Amazon’s Alexa-powered assistant, the Echo Show.

The Max is nicely designed, even if the bezel is rather chunky. The display is beautiful and renders photos beautifully (you can choose from your Google Photos library or a selection of included stock images for the backdrop). An ambient light sensor automatically adjusts the brightness to match the illumination in the room, so you can use it as an alarm clock without feeling like you have a Time Square billboard by your bed.

Videos also look great on it, too. Your streaming options are limited: You can watch services like YouTube, CBS All Access, and HBO Now, but you’re out of luck if you were hoping for Netflix or Hulu. That doesn’t seem like a huge loss—this isn’t meant to be a tiny TV—but my daughter was maligned to learn she couldn’t watch “Grey’s Anatomy” on it while putting the groceries away. I actually saw that as a positive.

But what about the camera?

Google integrated the camera as a fundamental part of the experience. The 127-degree field of view lens can cover most of the room if you set it in the corner, helping the device double as a full-fledged Nest security camera.

Google’s smart speakers could already tell users apart by their voices when they made requests, but the Nest Hub Max’s facial recognition takes the repartee to the next level. After the camera sees my face, the screen lights up with a small greeting and displays cards with personalized information like recommended YouTube videos, calendar events, and news headlines.

The camera can also see basic gestures I make in its direction. If I hold up my palm from across the room while cooking dinner, it knows to pause the music. If I make a video call with Google’s Duo app, the camera can actually track my face and zoom in on it without actually moving the hardware itself. It’s a version of what the Facebook Portal offers by physically pivoting the entire device around the room.

All of this depends on whether you trust the device to constantly peer into your space. There’s a hardware switch on the top of the display that turns off the camera and microphone—if you want to disable just the camera, you can do so through the settings. Google says the switch electrically disables the mic and the camera, so there’s no way to override it to snoop.

When the camera is on, Google goes out of its way to alert you of that fact. A green light next to the lens pulses when someone is monitoring the scene through the accompanying Nest app. And when the switch is off, the screen tells you with a persistent message.

Bottom line is, if you’re planning to keep the camera covered (there’s no built-in cover like there is with the Amazon Echo Show), you’ll miss out on some of the features that help justify its $229 price.

Where does it belong?

I put the Nest Hub Max in the kitchen, and the creators clearly expect others to do the same. It has Google’s Recipes feature built-in, but that still feels gimmicky at this point because of its limited options. Besides, my living room already has visible clocks and a TV screen, and though the assistant fits nicely into a bedroom, you will want to put it where it in direct sightline from your bed. The kitchen feels the most secure and makes the most sense.

No matter where you put it, though, I found the sound performance to be impressive. It can’t match the Sonos One speaker I sometimes use in the kitchen, but the Nest Hub Max has a big and boomy projection: It’s more than loud enough to fill my medium-sized suburban kitchen at half-volume. Given that it doesn’t have advanced adjustments like the Google Home Max speaker, I don’t recommend putting it under cabinets or inside anything cubby shaped—that’s a nightmare scenario that kills the sound quality of the speaker with echoes. I got much better results when I moved the Nest Hub Max out from under the overhanging cabinets.

It’s also a solid device for controlling your other smarthome devices, but you should make sure your connected gadgets work with it before taking the plunge. Google underwent some major changes when it switched over from the Works With Nest platform, so some devices may not pair as expected.

Even if you’re not going to use the camera feature, the 10-inch display is attractive enough and the sound quality is high enough to make the Nest Hub Max an enjoyable addition to the home life. Maybe just wait a little while to avoid paying full price. The original Nest Hub, dropped all the way from $149 to $99 a few weeks after its release. We don’t know for sure whether the Nest Hub Max will follow that path, but it’s worth noting.

If you’ve already bought into the Google Home platform, then this is a great pick up, especially since it acts as a security cam. If you’re already using some Alexa devices, however, you’re probably better served by an Amazon Echo Show that won’t require switching to a new voice assistant.