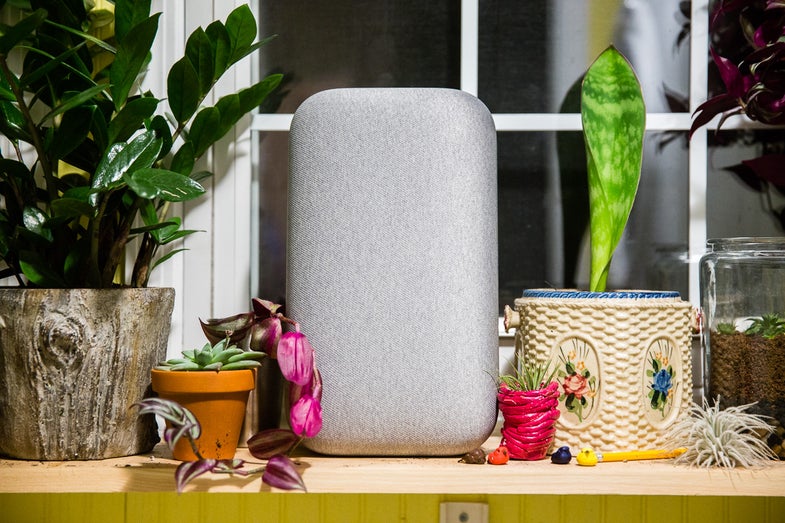 This story has been updated. It was originally published on December 13, 2017.

By now, we’ve become accustomed to smart speakers shaped vaguely like cans. The original Google Home, the upcoming Apple HomePod, the Amazon Echo and Echo Studio, the UE Blast, the Harmon Kardon Invoke, and a whole pile of others all opt for life as a cylinder. The Google Home Max, however, looks like a traditional wireless speaker, and that leaves lots of room inside for sonic power.

Google Home Max: What is it?

The Google Home Speaker does everything you’d expect a typical Google Home device to do, like tell you the weather, play trivia games, control smart home devices, and of course, sync up to music services like Spotify and Apple Music.

The Max is roughly the size of a large bread—not the wimpy Wonder Bread from the super market, but a hearty loaf from the farmer’s market. It measures 13.2 in x 7.4 in x 6.0 in and weighs 11.7 pounds, so it’s a pretty formidable little cabinet that’s meant to stay in place. It comes with a floppy rubber mat you can attach to the side of the speaker if you want to stand it upright, which comes in especially handy if you want to sync a pair of the speakers for stereo playback. 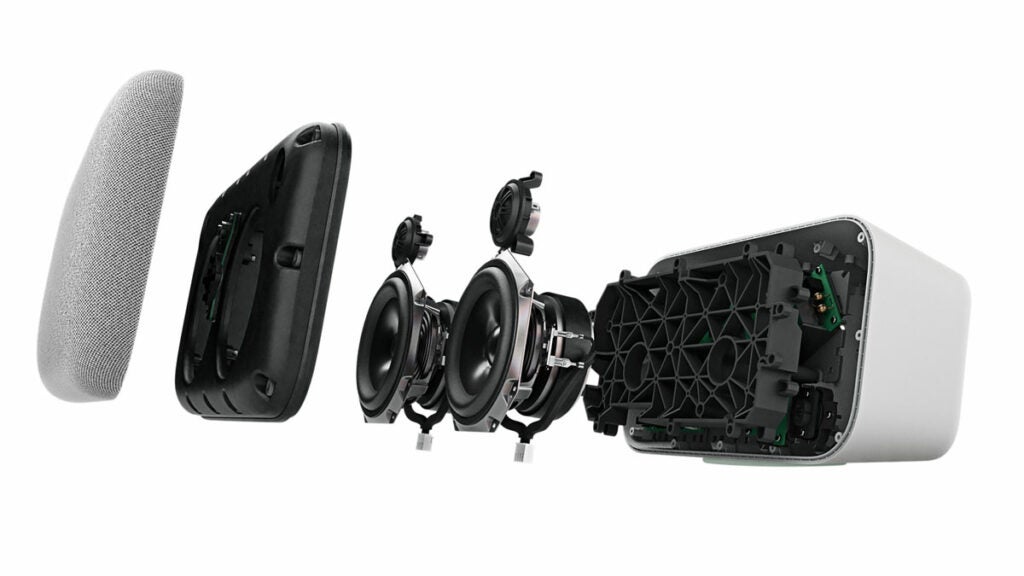 An exploded view of the Google Home Max

Inside the case you’ll find two 4.5-inch woofers and a pair of tweeters to go with them.

Tune for the room

In addition to its traditional AI implementation in the form of Google Assistant, the Google Home Max also uses artificial intelligence to tune the sound of the speaker to your room. It has an array of six microphones surrounding the speaker, which it uses to monitor that sound bouncing off the walls of your room. This allows it to monitor the bass output and specifically tune it so it won’t overpower the rest of the mix.

I moved the Max around my living room, putting it in corners, alcoves, open spaces, and up against the wall, and while the sound can’t stay completely consistent, it does a very reliable job maintaining balance. I notice more bass when the speaker is in an open space or against the wall than if it’s relegated to a corner or semi-enclosed.

Now, depending on your outlooks regarding speaker settings, you’re either smirking or scoffing at this moment. Because the AI does all the tuning work for you, the equalizer settings are kept under wraps. So, if you don’t agree with the Google Max Speaker’s taste in tunes, you can only adjust the bass and treble, which may not be enough for hardcore audio heads. 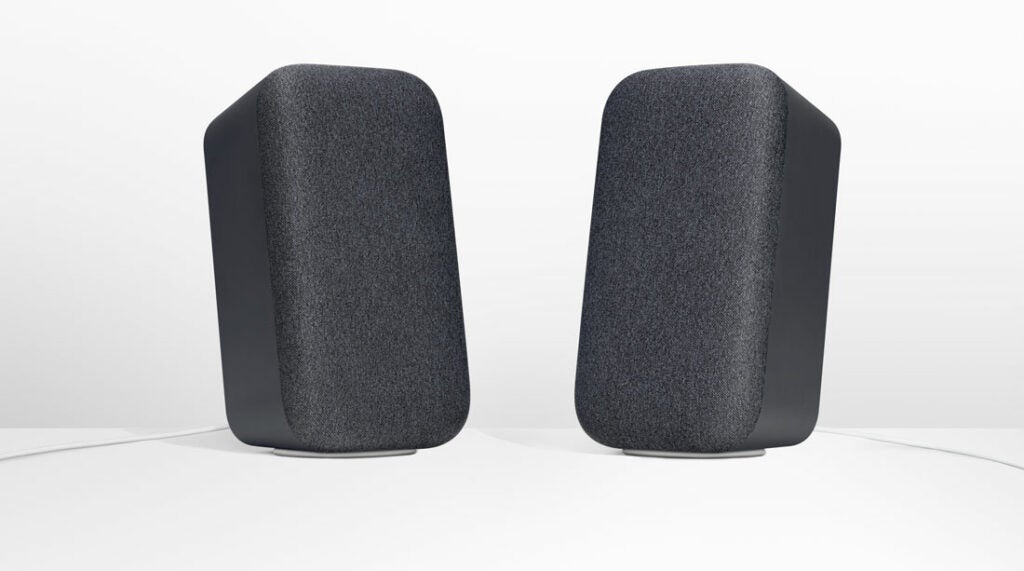 You can pair two speakers for a stereo audio performance, or sync up multiple speakers around the house for multi-room audio similar to a Sonos system.

So, how does the Google Home Max sound?

The first thing you’ll notice about the Google Max is how loud it is when you start turning up the volume. At 50 percent, it more than fills my living room, which is roughly 12 ft x 15 ft. At full volume, it’s enough to make my wife ask me if I was almost done reviewing this thing because it’s blasting out everyone’s eardrums. Google says it’s 20 times more powerful than Google Home and I can easily believe it.

The hardware inside consists of a pair of 4.5-inch woofers for bass and dedicated tweeters for the highs. This is different from the can-shaped design because it’s directional. The soundstage is fairly wide, so if you’re even vaguely in front of the grill, you’ll get solid sound, but if you end up all the way on the side or behind, you get less volume and clarity. That’s true with any cabinet speaker, of course, but it’s a departure for a can-shaped smart speaker that throws sound in every direction.

I ran the Bluetooth speaker through my regular battery of eclectic music, powered mostly by my Spotify year-end wrap-up playlist, which is full of Run the Jewels and Animals as Leaders tracks. It handles heavy bass without a problem, eschewing distortion, even when the volume got too loud for my room. The highs cut through nicely because of the tweeters, but I sometimes found the sound slightly lacking in the mids.

Compared to its obvious competitor, the Sonos Play:5, the Max is bass-heavy, which you’ll either like or dislike depending on your taste and your music selection. Still, the Max is cheaper than the Play:5, and that’s without the fact that it requires an Echo Dot to make it Alexa compatible. 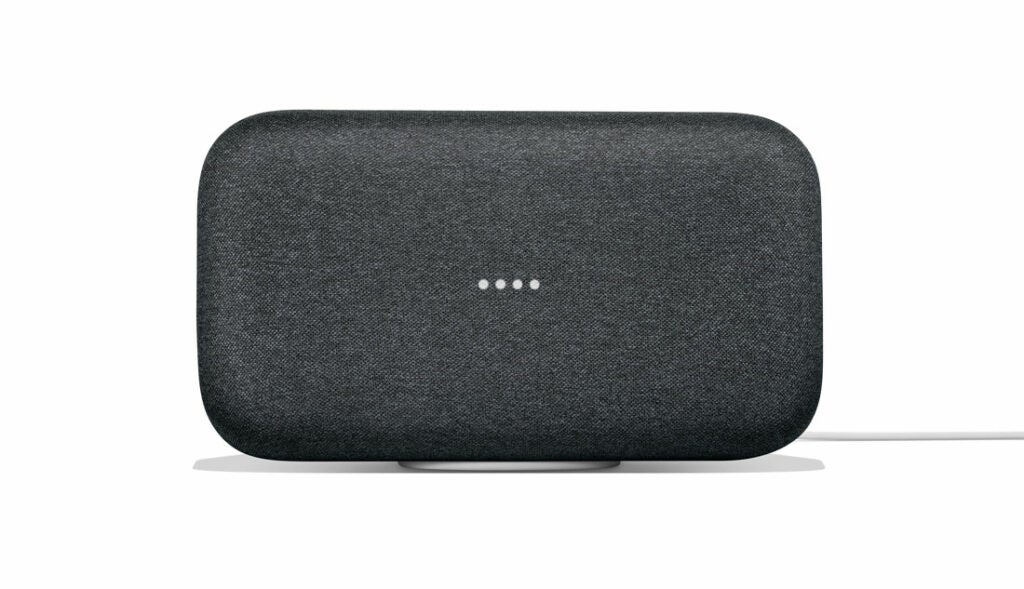 The lights on the front of the speaker are subtle, but indicate when it’s listening or changing the volume.

How smart is it?

Using the Max is a lot like using a regular Google Home Max or pretty much any other smart speaker. Setup takes less than five minutes, though the early unit we tested required a software update that took roughly 10 minutes to apply.

The redesigned microphone array promises more sensitivity, even when the speaker is cranking at high volume. Under normal circumstances, I found it to be more sensitive than a regular Google Home, catching everything above a whisper from across the room when it was quiet. Once the music was playing, it took a regular speaking voice to cut through the noise, but I never had to shout.

The smart home, however, is one place where the volume can be a downside. I asked Google to turn off my lights before going to bed late one night and her response was way too loud for a totally quiet house. Don’t forget to turn down the volume after listening to loud music.

The top of the speaker—which becomes the side if you stand the cabinet upright—has an array of touch-sensitive controls, which work, but I hardly found myself using. One of the big draws of this thing is that I never have to touch it, but it’s nice to know that I can.

You can connect to the Google speakers over Wi-Fi, Bluetooth, and even auxiliary headphone jack, which is a nice touch if you just want to use it like a regular home speaker.

Related: You can also check out the Sonos Move speaker review.

Should you buy the Google Home Max?

We’re about to enter an era of more powerful smart speakers and Google is really the first in the fray. If you’re already fully committed to the Google Home platform, then this is a worthy upgrade from the comparatively puny Google Home. The price point is a bit steep, especially when we’re yet to get a real feel for Apple’s Siri-powered HomePod. The UE MegaBlast is also a compelling option for less, but the smart home Alexa integration is still a bit lacking compared to a true smart speaker.

It will be interesting to see down the line if Google offers something in between the budget-friendly Home and the more premium Google Home Max to fill out its lineup. Until then, the Max is an excellent—if expensive—way to bug your neighbors with all-night death metal marathons.