This new smart screen watches you sleep without using a camera. 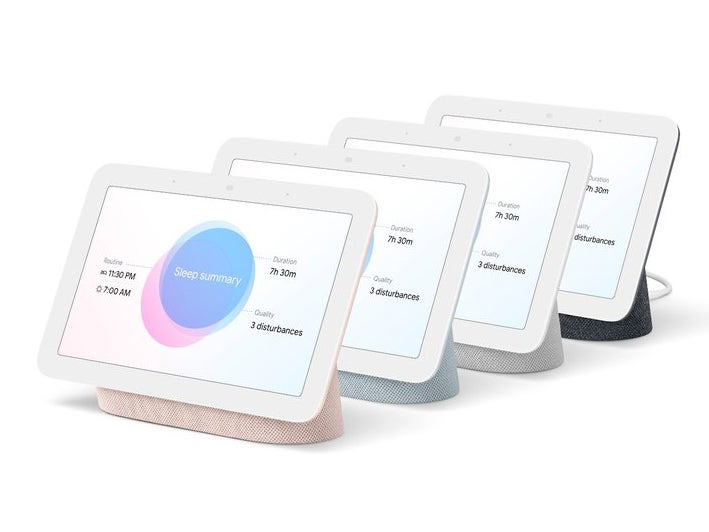 You won’t find a camera built into Google’s new Nest Hub. But, even without an optical imaging device, the company’s new smart screen can observe your sleep and tell you how well you’re slumbering. Google calls the enabling technology Soli. It relies on radar to determine how you spend your time while you’re in the sack.

What is the Nest Hub?

The device itself has a 7-inch touchscreen display that syncs with your various Google accounts. It can play content from YouTube, display data from your Google Calendar, show you content related to your Assistant requests, and display a stream of images from your Google Photos account.

Built-in speakers make it a full-on smart speaker with a trio of full-range microphones that pick up your voice when you’re asking for Google Assistant or sending messages.

Unlike the Hub that came before it, however, it doesn’t have an optical camera, so it won’t recognize your face when you walk in front of it.

What about sleep tracking?

Instead of watching you sleep or tracking your vitals through a wearable device, the Nest Hub relies on a radar-based technology it calls Soli. If it sounds familiar, it’s because it debuted back in 2019 with the Pixel 4 smartphone, which used the tech to wake up when your hand got close to it. It also allowed users to perform simple commands by waving their hands over the radar sensor using gestures.

[Related: The Pixel 4′s new radar sensor lets you control your phone without touching it]

When you sleep, the radar sensor monitors the electromagnetic field in the room. Whenever you move–whether it’s a cough, a flop-over, or getting up to use the bathroom–the sensor perceives that disturbance and records the data.

At the end of the night, Google’s software analyzes the data it collected and translates that into scores to indicate how well you slept. It offers feedback on the amount of sleep you got, as well as the quality of it and how many times it was interrupted.

It can detect coughs, sneezes, and even the rate at which you breathe. Snore detection will also let you know if you’re a noisy sleeper. That way, you can bring it up with your doctor or try some common remedies like slightly elevating your head to see if it makes a difference.

A built-in temperature sensor monitors the ambient air in the room, which can have an effect on the overall quality of your rest. It also keeps tabs on sound and light levels in the room through the night. The whole point is to look for trends that may help you tweak your routine in productive ways.

Google says the tech will even work if you sleep in the same bed as another person. You’ll just have to set it up while you’re alone in your most frequent slumber spot.

What happens to that sleep data?

In an effort to make users feel more comfortable putting sensors next to their beds, the company has enabled the device itself to do some of the processing. Google a version of the “events” that happen while you sleep to help calculate the overall analysis, but it’s not an open line to the cloud as you sleep.

Again, the total lack of a camera is a plus when it comes to privacy as well since it negates the possibility that someone could get access to any video content, whether it’s live or pre-recorded.

Soli does enable some gesture controls, as it did on the Pixel 4 phone, but many of those are simple system-based commands like changing a track in your music service, which can happen on the device.

How much does it cost?

The Nest Hub is available for pre-order now for $99, which still seems like a steal for a capable smart speaker with a solid 7-inch screen on it. For now, the sleep tracking feature is free, but it’s only a “free preview” at the moment, so you may have to pay down the road to keep it going. Google recently finalized its purchase of fitness tracking company Fitbit, so it’s not out of the question that this service could be roped into the premium tier of that service down the road.