Get some friends for your Google Home or Amazon Alexa. 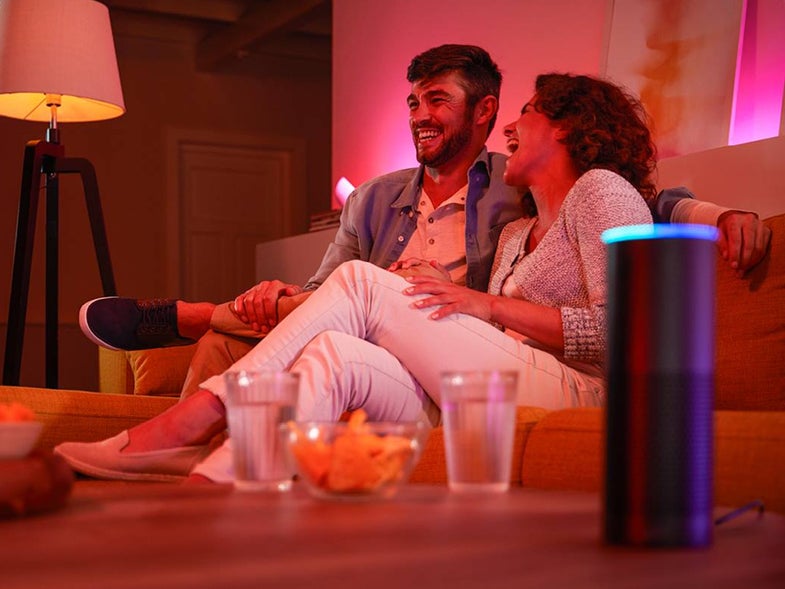 The Google Home and Amazon Echo speakers make dumb homes smart in an instant, and for a relatively low price point—you can pick up the smallest members of the Home and Echo lines for $50 (or even less during sales season). While both smart speakers can do an impressive number of tricks right out of the box, they’re even more powerful if you sync them with third-party devices.

To control a smart lightbulb or thermostat through voice commands to your Google Home or Amazon Echo, you simply need to add it as a device. With Google Home, that requires the free Google Home app (for Android and iOS). Use the app to set up your smart speaker, then visit its Home Control Section and add the smart device you want to speak to. For the Amazon Echo, you’ll need the Alexa app (for Android and iOSiOS). Head into the app’s Skills section and search for the device’s name, then pick the option to enable it. With that done, you’ll be able to control your music, lights, television, even home security with your voice alone.

Dozens of gizmos will work with one or both of these speakers, and third-party manufacturers continue to bring out additional ones. If you’d like to see all of your options, Google has made a list of Home-compatible devices and Amazon has collected the Echo-compatible ones. With so much smart tech out there, it can be hard to figure out which device to buy first. So we collected six of our favorite gadgets for smartening up your home.

Google’s dinky streaming dongle works like a charm with Google Home. Simply say what you want to see: Shout at your speaker to start playing Orange is the New Black from Netflix or cat videos from YouTube and watch it spring into action.

In order to set up the Chromecast, you’ll need that Google Home app. It manages the whole system, picking up your spoken commands through the Home speaker and sending them over to your sensibly-labeled Chromecast (it needs an easily-understood name like “living room” or “study”). To set up the service, open the Home app and tap the menu button (the three horizontal lines on the top left). Choose More Settings and then hit either Music or Videos and Photos.

At the moment, you can control a limited number of apps with voice commands: Google Home can play Netflix, Spotify, Google Play Music, and YouTube. However, more third-party programs may be able to sync with the smart speaker in the future.

Just as Google’s video streaming dongle is optimized for its smart speaker, Amazon’s television plug-in integrates seamlessly with its digital assistant. In fact, the newest Amazon Fire TV has Alexa built into its remote, so you can enjoy voice control without actually buying an Echo. If you do own that smart speaker, however, the devices sync to let you vocally order the movies, shows, photos, and music you want to see on the big screen.

As long as you register your Fire TV to the same Amazon account as your Echo, it can automatically set up this pairing. As with Google Home, you can call out what you want to play, and speak basic commands like “play” and “pause.” The same tricks work on all generations of Amazon Fire TV boxes and sticks.

Unfortunately, though unsurprisingly, you can’t control an Amazon dongle through a Google Home. Each streaming stick works best with that manufacturer’s smart speaker, so you need to choose a brand ecosystem and stick with it.

Philips has been developing smart lights since long before smart homes became fashionable or even feasible. These days, the company offers an extensive selection of bulbs that work easily with smart speakers like Google Home or Amazon Echo.

If you’ve ever wanted to say, “Alexa, turn off the lights,” or “OK Google, turn the living room bright orange,” then the Philips Hue range has you covered. In addition to integrating with Alexa and Google Assistant, the bulbs can work with a dedicated app (for Android and iOS) to automatically switch on and off on timed schedules or create custom color combinations.

You’ll find several different options under the Philips Hue umbrella, from simple white bulbs you can turn on and off to colored lightstrips you can configure to create a miniature disco. No matter what effect you’re hoping to achieve, you can find a lightbulb to suit your tastes.

Smart switches might not be the sexiest of smart home products, but they certainly rank among the most useful: Imagine saying something to your smart speaker and then seeing pretty much any device in your home turn on or off. It’s a simple and inexpensive way of extending the capabilities of your fledgling smart home. If you’re looking for a smart switch that will work with both Google Home and Amazon Echo, try Wemo Insight Smart Plugs.

To use this Belkin product, you must first configure it through the Wemo app (for Android or iOS). Then you can set up smart-speaker control through the apps for Wemo, Google Home, or Alexa (for the latter, look in the app menu under the Smart Home heading to find the Smart Home Skills list). With that done, plug any device into the smart plug, and you’ll be able to turn it on or off with a simple voice command. You don’t even need a separate hub—just give each of your switches a recognizable name, so your smart speaker always knows which one you’re referring to.

In addition to smart switches, Belkin’s Wemo line includes motion sensors, light switches, and other products that also integrate with smart speakers. And that range is still growing.

*Wemo Insight Smart Plugs, $40 and up on Amazon

If you’re looking for smart thermostats, you have a number of choices, including the popular Nest devices. However, in this guide, we’re going to recommend the Ecobee4 thermostat, because it easily collaborates with the speakers and apps from both Google and Amazon.

Ecobee provides standard smart-thermostat features, such as controlling your home’s temperature from anywhere with your smartphone and targeting lone cold or hot spots in specific rooms. In addition, you can say simple voice commands to change the temperature and perform other functions, such as switching between pre-set modes and setting timers.

Even without a speaker, you can still handle all these controls through the Ecobee app (for Android or [iOS). But to control this device through your speaker, you need to add it in the Google Home or Alexa app. Alternatively, chat directly to the thermostat itself: The Ecobee4 has Alexa on board, so you can use voice control without a smart speaker.

Now that you can adjust your light, temperature, and electronics with your voice, it’s time to beef up your home security with smart locks. You can install them over your existing deadbolts and then control them via app. This lets you unlock your door with your phone, grant temporary access to friends and family, and check which doors are secure. And if you pick the August Smart Lock, you’ll be able to control your locks with Google Home and Amazon Echo as well.

With smart speaker integration, you can access key controls—like locking or unlocking specific doors and finding out which ones are locked—from the comfort of your sofa. Voice commands make this even easier than tapping buttons inside the phone app. And setting it up is relatively easy.

To control your locks with your voice, first fit the lock to your door using the provided instructions and then get it set up with the help of the August Smart Lock app for Android or iOS. Then, switch to your smart speaker, and either say “Ok Google, talk to August” and answer the prompts (for a Google Home) or head to the Skills section from the Alexa app on your phone and look for the August Smart Lock skill, which you can then enable (for an Amazon Echo).

August Smart Lock, $170 and up on Amazon