The redesigned speaker offers impressive audio quality thanks to a new driver configuration. 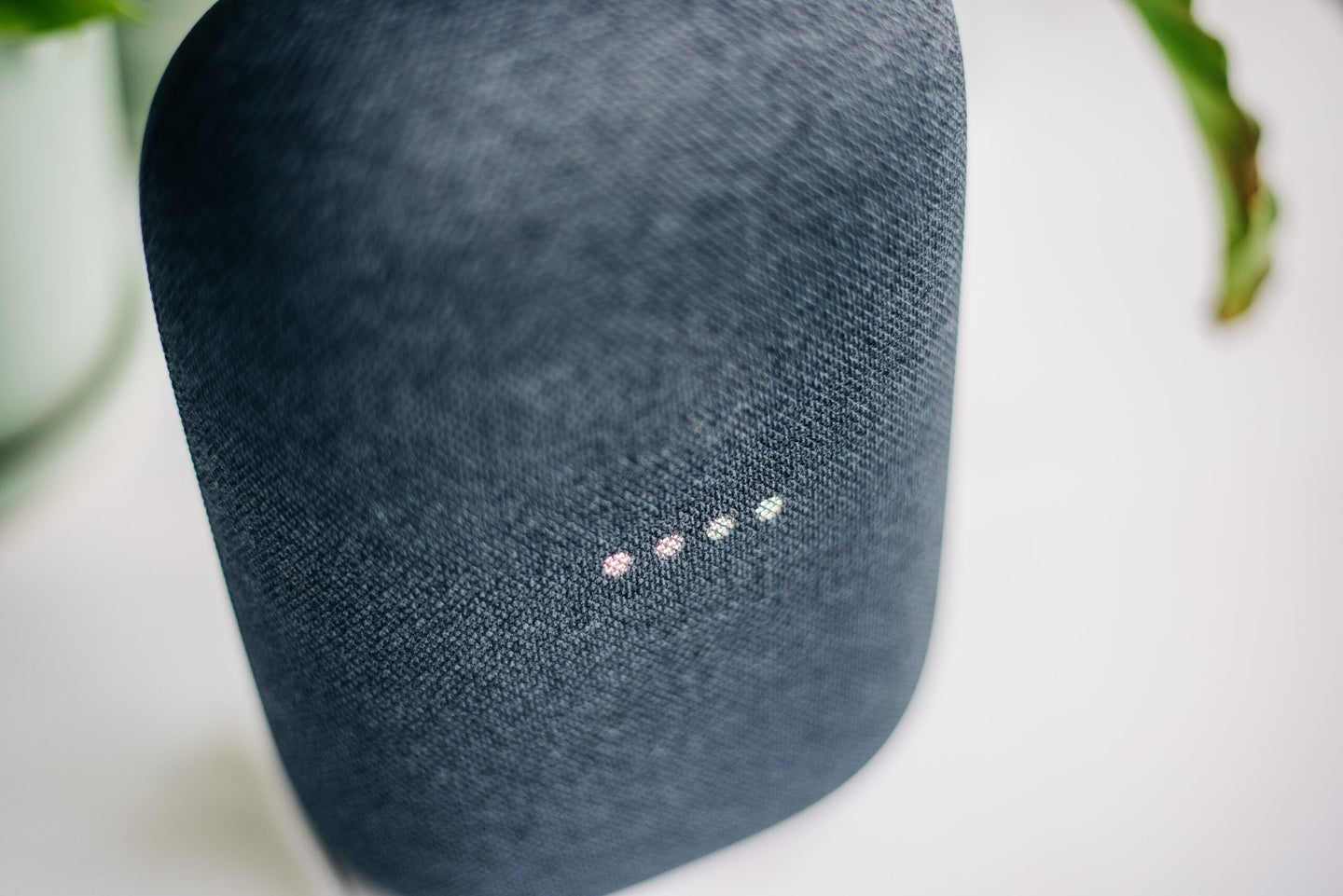 Four illuminated dots let you know when the Nest Audio is listening. They're not multi-colored like on the original Google Home. Stan Horaczek
SHARE

This story was originally published on Oct. 6th, 2020.

Early smart speakers didn’t have to sound incredible. The novelty of an always-on digital assistant that users could beckon with their voice was enough to offset the audio shortcomings inherent to small house speakers with sound fields that spread out in every direction. Last week, Google announced its latest smart speaker, the Nest Audio, which promises seriously upgraded performance over the Google Home that came before it, as well as an aggressively low $99 price tag.

The Nest Audio looks like a drastically slimmed-down version of the flagship Google Home Max speaker, which debuted back in 2017. The Max included a number of innovative audio features at the time, including the ability to automatically adjust its performance based on its location in the home based on data collected through the onboard microphones. Nest Audio lacks that ability but does offer some new tech Google created specifically for the new form factor.

When music plays on the Nest Audio, this Google smart speaker analyzes what the tracks to in order to try and adapt its playback to match the source. It’s not listening to the real-world playback, but rather analyzing the content itself. After all, the same settings wouldn’t really work for both death metal songs and podcasts about crafting.

Google analyzed more than 2,000 different room placement options to try to tune the speaker so that it will perform well just about anywhere it sits. The company is pretty sure, however, that it will end up near a wall instead of in the middle of a room. As a result, the Nest Audio has a much more directional soundstage than the original Google Home device. The Nest Audio has a pair of drivers inside—a three-inch woofer to handle the mids and lows, as well as a 0.75-inch tweeter to handle the highs. Both point straight out through the front grill of the device.

The original Google Nest Speaker relied on a single driver to handle its entire range of frequencies, which made it more consistent from various listening angles, but overall it was somewhat underwhelming thanks to muffled highs and muddy lows. The effect got even more pronounced as with the volume cranked.

The new Google smart speaker arrangement also gives Nest Audio a 75-percent advantage over the original Google Home when it comes to bass and a 50-percent increase in overall volume. From a subjective standpoint, the Nest Audio sounds excellent out of the box, especially considering its $99 price tag. In fact, the sound quality actually improves when it’s playing louder when compared to the quieter levels.

Its frame consists of aluminum and magnesium instead of plastic, which gives the drivers a sturdy foundation that doesn’t buzz and vibrate when it starts getting loud. Even at maximum volume, I didn’t notice much in the way of distortion or extraneous noise. Unless you have a very large room, you probably won’t even need full volume anyway. My roughly 9′ x 11′ office didn’t require more than half volume for very satisfying sound and, cranked to the max, Kendrick Lamar’s “Swimming Pools (Drank)” was loud enough to disturb my kids during their remote schooling.

The back half of the Nest Audio is largely empty underneath its smooth case in order to give the air inside enough room to move with the drivers. Tiny speakers don’t have that luxury, which can result in muddy or “boomy” sound, especially in the low-end. The Nest Audio’s extra bass is welcome, but the sound definition in the low-end is a bigger improvement. Complex metal tracks like “Cafo” by Animals as Leaders can turn into a featureless sonic blob under sloppy bass performance, but the Nest Audio handled it better than I’d expect at this price.

Even with Google’s efforts to make the nest sound good anywhere, placement does matter. I found that keeping it a few inches off of a flat wall gave me the best results. Putting it into a corner—or even worse, a bookshelf—muddied things up considerably. Bookshelves are generally bad spots for speakers anyway, so it’s easily forgivable, but it’s worth testing out several spots to achieve the best possible sound.

From a smart speaker perspective, Nest Audio now does more of the voice assistant work directly on the device when compared to the original Google Home. It uses the same machine learning chip found in the Nest Mini, which makes it faster to recognize and execute commands. Nest Audio has three microphones, up from two in the Google Home, but I didn’t see a huge difference in efficacy when it comes to hearing its wake words.

Listeners can now create zones around their spaces and arrange Google’s smart speakers into a more customizable home assistant system. So, if you want music in the office and the kitchen at the same time, you can accomplish it, but setting it up takes a bit of configuring. As Google—and every other company that makes smart assistants—moves toward fully voice-controlled systems, it’s increasingly easy to let new features slip by without finding out about them. Setting up multi-room audio is fairly straightforward, assuming that you find out about it in the first place.

That concept carries over to the physical hardware as well. The Nest Audio has three capacitive, touch-sensitive zones on top of the device that act as buttons. Tapping on the left lowers the volume, while tapping on the center toggles between play and pause modes. I would never know the controls were there without a prompt or an accidental touch. It’s good for the aesthetic, but it’s not unrealistic that I’ll eventually just forget that they’re there.

Ultimately, the Nest Audio is a smart speaker that sounds excellent and performs well for $99. I compared it directly to a Sonos One, and the Sonos provided a noticeable advantage in terms of pure audio quality—especially in the midrange. The Sonos also costs twice as much, however, which means buyers could get a pair of Nest Audios for the same price and sync them together in a stereo pair, which offers more volume, a larger soundstage, and more directional effects from stereo tracks.

The original Google Nest Home was fine for music because it was absurdly convenient. Now, the Nest Audio has clearly reassessed the “audio” part of its name in a way that makes much more sense for typical use cases. It’s a worthwhile upgrade from the Google Nest Mini or the aging Google Home you’ve had kicking around since TikTok was still called Musical.ly.