An exclusive look at how Google designed its Stadia game controller

Google watched people play video games for more than 6,000 hours in the name of design. 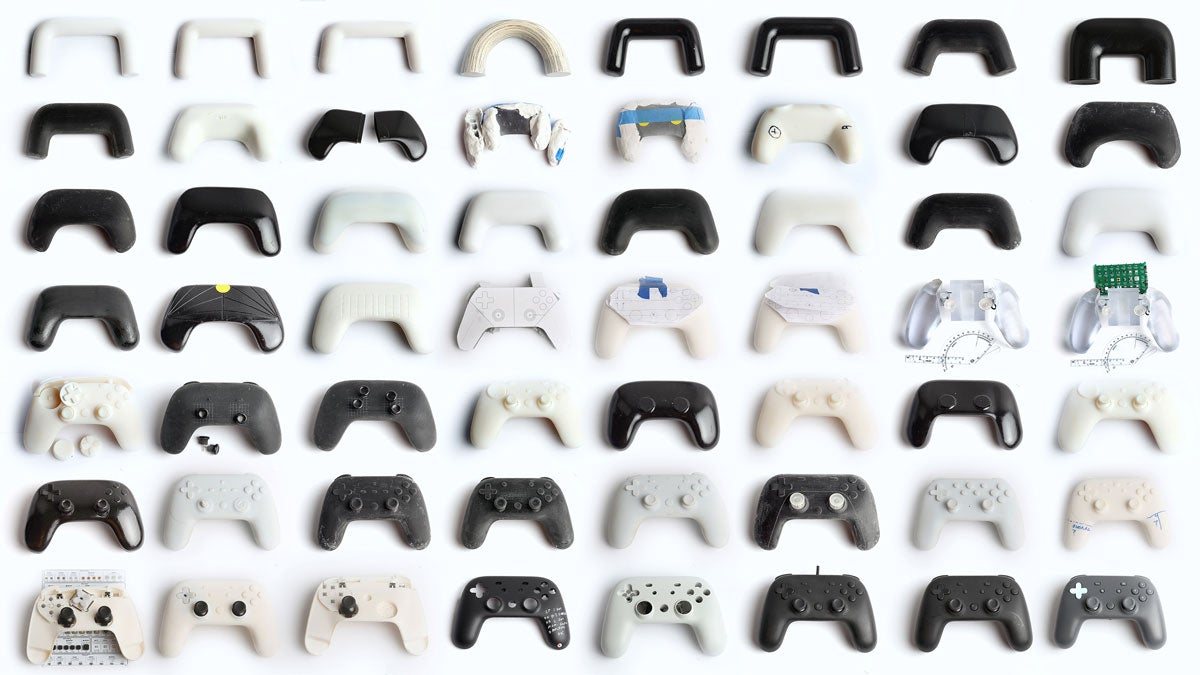 Even if you’re a regular gamer with hundreds of hours behind the thumbsticks, you’ve probably never really thought about the way you hold your controller. Google design director, Isabelle Olsson, however, spent months considering exactly that while leading the design team behind the Stadia controller. The device is an essential piece of Google’s upcoming Stadia service, which will allow gamers to play high-end, graphics-intensive video games on whatever screen they choose using a wireless connection and the company’s massive network of computing power.

At first glance, the Stadia controller looks like a mashup of current gamepads. The rounded grips and dimpled thumbsticks evoke Microsoft’s Xbox One controller, while the elongated handles and pronounced triggers more closely resemble those found on Sony’s PlayStation 4 model. According to Olsson, however, the Stadia controller isn’t a Frankenstein’s monster of familiar features, but rather the result of a full development process that started from the ground.

During an interview via Hangout, Olsson showed off some of the objects that inspired the Stadia controller’s final design. They weren’t other controllers, but rather other objects like a chef’s knife, and even a hammer. “Gamers view a controller as a tool. You have to be able to play for eight hours,” she explained. Truly ergonomic tools give people options when it comes to holding them with different grips and in various orientations.

In order to understand how players position their hands during gaming sessions, Google watched people play. “We put out rigs of cameras and filmed roughly 6,000 hours of gaming time to observe how people were holding different controllers,” says Olsson. Google’s experts analyzed the footage and fed insights to the design team about what they saw.

Watching how gamers interact with an object is crucial for designers because users aren’t always adept at interpreting—or describing—what they want in an experience or a product. “When you get feedback on projects, it’s about listening to what they’re saying, but you also have to watch what they’re doing,” says Olsson. “When someone picks up the Stadia controller for the first time, they start rotating it around in their hands to feel the curves—you can learn from that.”

Olsson says the team went through “hundreds” of prototypes, some of which were more successful than others. One of the first steps included giving test subjects sculpting clay and letting them shape it to their tastes. The company then 3D scanned and photographed the models, most of which were, at Olsson puts it, “not so successful.”

Another prototype included a controller with a grid-shaped pattern on the front that allowed users to place elements like the thumbsticks wherever they found them most comfortable. Even the angle of the protruding hand grips got the full scrutiny of the design team. A clear acrylic prototype with rotating handles and a built-in protractor helped track player hand positions for analysis.

While speaking with Olsson, I picked up an Xbox One controller I had sitting around and realized that I naturally hold a controller crooked. The grip presses farther into my left palm and I activate the top buttons and triggers with totally different parts of my ring fingers. It’s not something I’ve ever consciously noticed before now, and it’s something Olsson says users aren’t necessarily even meant to realize. “It shouldn’t matter how you hold it or how big your hands are,” she says. “It should be comfortable however you hold it.”

The aesthetics received similarly in-depth attention. The team went so far as to make a polished aluminum version of the controller’s shape, which allowed them to really inspect its curves. “We wanted to see how highlights hit it in an extreme way,” she says. “We were looking for any surface flaws or issues that you might pick up, even if they aren’t apparent just by looking at it.”