A Muslim Teen in Texas Finds Himself at the Ivory Gates

Gatekeeping in Science is Exactly What We Don't Need 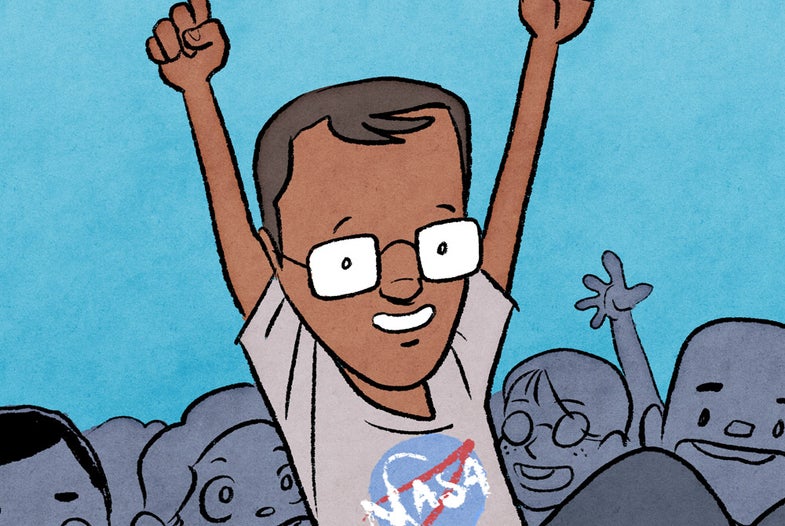 Everywhere you go, there are gatekeepers. Think of mean complaining about fake geek girls or basically any part of gamergate. Some people (mostly young white men) get really grumpy when their precious identity is besmirched in some way by the presence of somebody whom they find unworthy. But last weekend while I was in Portland, I ran into a sort of gatekeeping I never expected.

I was still high off the outpouring of support for 14-year-old Ahmed Mohamed. Last week, the muslim teen was arrested when a LED clock he was tinkering with was suspected to be a bomb—or at least a bomb hoax. The science community came out in droves to show their support for him. The president even invited him to the White House as #istandwithahmed spread across the internet. Then a smaller, angrier group began to speak out: Salty internet pedants. As soon as the cheers for Ahmed began to die down, they started picking apart everything from the teen’s choice of words, to the type of clock he brought into school. Richard Dawkins jumped in, and it was all over after that.

Okay, maybe I’m not all that surprised this happened. After all, in front of every person of color receiving any bit of media attention, is a loud white guy trying to make it all about him.

Only now, we’re dealing with the worst sort of gatekeeping perpetrated by the exact people who should be fighting against it. I’ve featured them in a comic before: They’re the old guard science communicators who will wax poetic about how science will save us all, while working hard behind the scenes to make sure only the “right” people become scientists. It’s bad enough that there are academic gatekeepers who hold back minorities. But children and teenagers?

Through thinly veiled islamophobia, they dismissed Ahmed Mohamed as not skilled enough to be worthy the praise and attention he has received. Praise and admiration, mind you, given in proportional response to the utter humiliation he received at the hands of his school and the police. As soon as the charges were dropped, Ahmed was placed under suspicion all over again.

In a field where people work day and night to make sure every kid has a chance to become excited about science, the thought that there are old white dudes publicly sneering at a teenager because he wasn’t ingenious enough is sickening. Seeing people who identify as skeptics entertain wild conspiracy theories about a sinister muslim boy and his plot to get arrested for attention would be hilarious if it weren’t so toxic.

So maybe Ahmed merely took apart a clock and added a cool new case mod. I was doing the same thing at his age. I broke so many gadgets by taking them apart to see how they worked. We should be so lucky to have more kids like Ahmed out there. Exploring, learning, and always tinkering.

Special thanks to Alex for the Famicom line.