There is no shortage of awe-inspiring pictures from the space age, like Apollo 8’s iconic Earthrise or the Apollo 17’s... 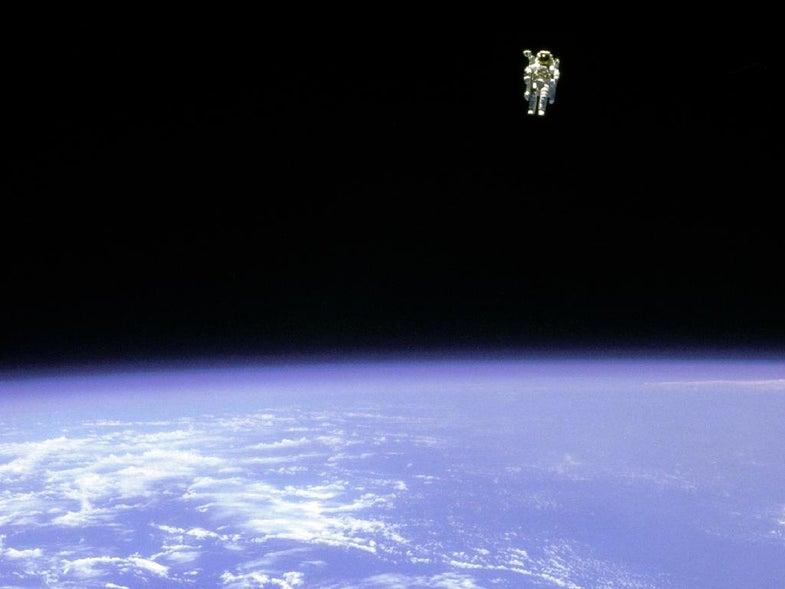 There is no shortage of awe-inspiring pictures from the space age, like Apollo 8’s iconic Earthrise or the Apollo 17’s famous shot of the full Earth taken on their way to the Moon. The picture of shuttle astronaut Bruce McCandless floating 300 feet from the orbiter Challenger is another iconic image that has graced countless book and magazine covers. And it’s always struck me as the scariest space exploration image. How could an astronaut floating alone so far from the safety of his spacecraft not be completely terrified? Last summer, I had a chance to ask the man in the picture, Bruce McCandless, just that. 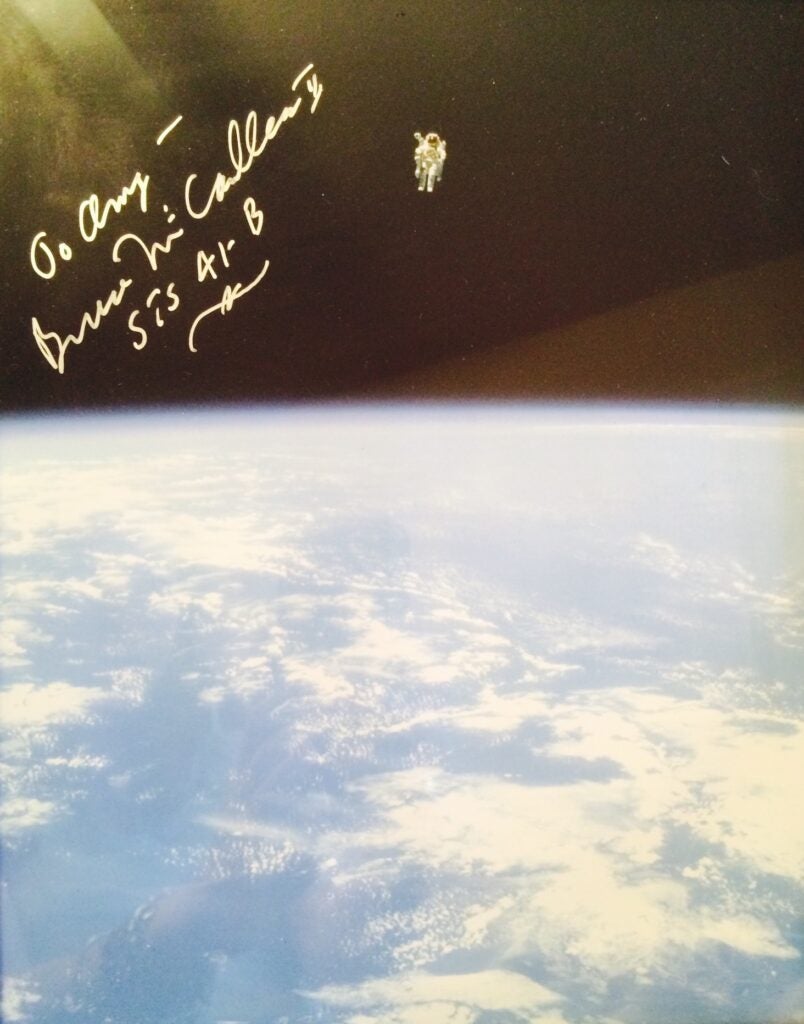 Among STS-41B’s goals was the first test of the Manned Maneuvering Unit. The MMU was the culmination of decades of research and development into astronaut mobility in orbit, and it was a far cry from the hand-held compressed oxygen gun Ed White used during America’s first spacewalk in 1965.

The MMU was a sort of backpack with armrests. It weighed 340 pounds, had an operational lifetime of six hours, and could safely take an astronaut 450 feet from the shuttle. It was described by astronaut Joe Allen as an overstuffed rocket chair, and it was also the closest NASA ever came to giving an astronaut a jet pack.

The backpack portion housed the two silver-zinc batteries and the nitrogen tanks that fed the two dozen thrust rockets spread across the unit. Astronauts controlled the MMU by fingertip controls located on the arm rests. The left hand made translational changes (movement left, right, up, and down) and the right hand made rotational changes (pitch yaw and roll).

The MMUs were, among other things, intended to give astronauts the freedom to pop outside and repair an orbiting satellite. It was thought that this would be easier than maneuvering the whole large shuttle orbiter up close to a satellite. An astronaut could perform an EVA while his crew members managed some other task. But before the MMU could become a tool, astronauts had to prove it worked.

The EVAs on STS-41B fell to McCandless and Stewart; McCandless had played a role in designing the unit. When it came time for the first EVA on February 7, the two astronauts retrieved their MMUs from their stored position in the space shuttle’s payload bay. Before stepping out, McCandless wanted to see how easily he might become disoriented in free flight. He had Stewart grab his ankle and fling him around in all directions in the safety of the payload bay. McCandless told me he was able to recover his bearings in the area pretty quickly. As he started moving out and away from the spacecraft, he felt confident. With the orbiter in sight and the Earth beneath him, it wasn’t hard to keep track of where he was. 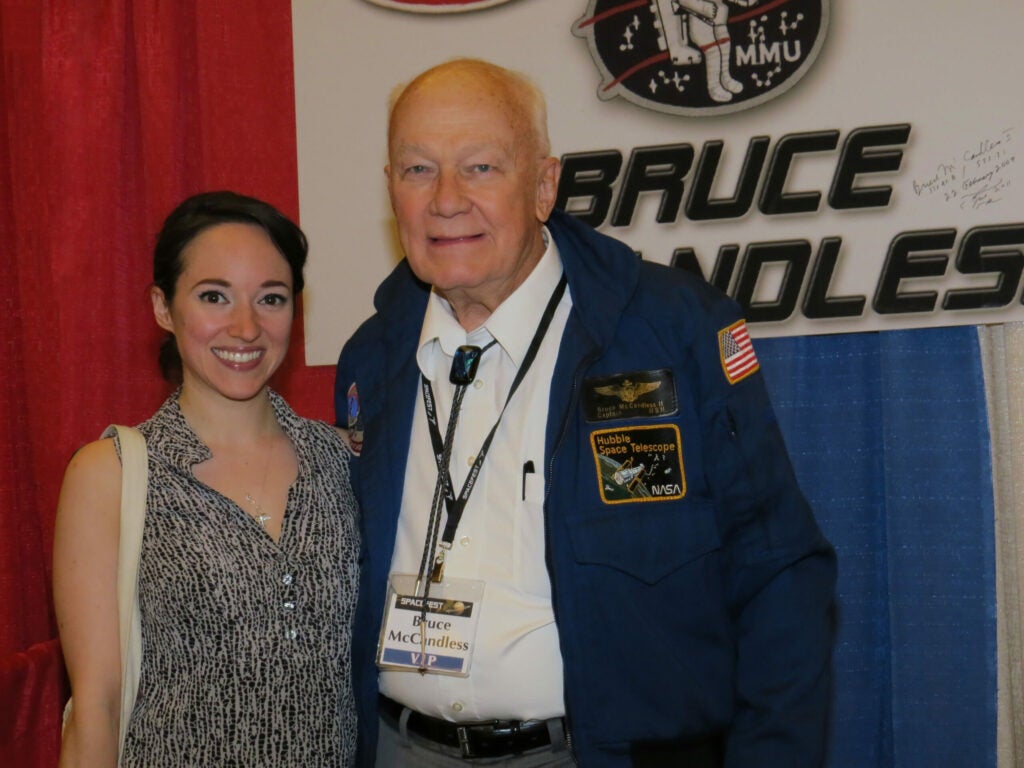 Me and Bruce McCandless.

Floating hundreds of feet from Challenger was a test, and McCandless had every intention of taking a minute to appreciate his unique situation. He told me his plan, once he was as far from the spacecraft as he was going to go, was to turn away from the orbiter, turn down the volume on his headset, and just look out at the vastness of space.

McCandless never got that moment of quiet contemplation. There were three voices in his head during that EVA: the voice from mission control in Houston, the voice from his mission commander Brand in the shuttle, and the voice of his spacewalking partner Stewart. There was so much going on and so many conversations and instructions running through his head that McCandless forgot to turn around and take in the moment.

But, he told me, not stopping to take in the moment didn’t kill the experience. Bruce McCandless couldn’t have been nicer. He didn’t even look at me like I was crazy when I asked him flat out, without much introduction, how he didn’t have a complete panic attack during that EVA.

Sources: DVICE; NASA. A neat source if you have 10 minutes, the STS-41-B post-flight press conference.