Will I always have to wear glasses? 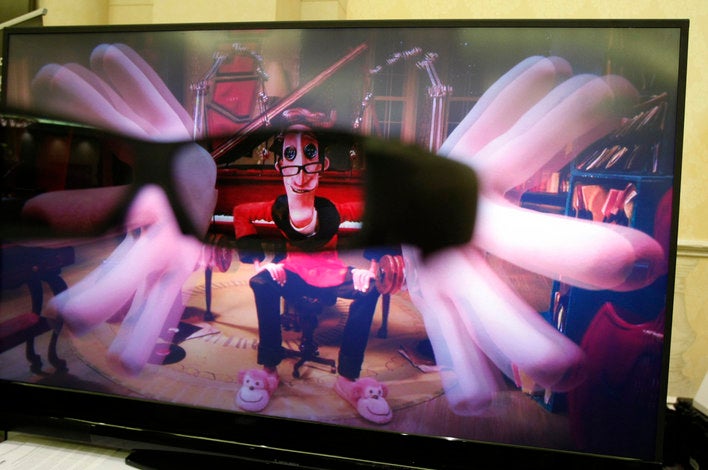 Myth #1: 3D TVs will increase the price of my new TV dramatically.

Actually, 3D compatibility will just be a new feature of many of the HDTVs entering the marketplace in 2010. As such, it will not necessarily increase the cost of production of the TVs any more than another feature (such as 120Hz rate in LCD TVs) would. However, the feature is being included on the higher end models offered by manufacturers. Those models often also include a host of other top features such as super thin design, increased black levels, better processing engines, high Hz rate, and others. For this reason, the TVs with 3D compatibility will appear more expensive, but it’s not entirely due to the addition of the 3D capability.

Actually, Mitsubishi has had 3D-enabled DLP televisions on the market since 2007. The feature is not new, but it has been improved.

3D glasses will only need to be worn when viewing 3D programming. 3D is just another feature of the TV. The TV will operate as a normal 2D TV with all but your 3D content–and like with any normal 2D TV, you won’t need glasses.

Myth #4: 3D Glasses will not be necessary with the new 3D TVs.

This is true of a small test sample subset of smaller LCD monitors in the 15″ to 20″ size range. It’s possible to view 3D content when viewing these specialized monitors from directly front and center with little movement. This will not be the case for 3D TVs available in stores to consumers. They will all need 3D glasses to be able to view the 3D content. The technology for glasses-free 3DTV is coming–Toshiba recently showed off an example–but it’s still pretty far away in any reasonable consumer sense.

Strangely enough, some of the new LCD 3DTVs won’t provide full high-definition 1080p video. Instead, they’ll only be able to display 600 to 800 effective lines of resolution, less than the 1080 necessary for full high-def. The exceptions include a special line of LCDs developed by Sony (LX900 series and HX900) and, of course, good old plasma TVs. Panasonic’s 3D plasma TVs will show you a full HD picture.

Myth #6: All 3D Glasses are the same and the glasses come with the TVs.

Unfortunately 3D glasses in most cases must be purchased seperately. They’ll likely cost somewhere between $50 to $100. There are a few different types, including anaglyph 3D glasses with different colored lenses (like the classic blue-and-red Saran wrap design), linear polarized, and circular polarized glasses. There are also 3D shutter glasses, which require a power source but work pretty well otherwise. The TV manual that comes with your 3DTV will let you know what type of glasses you will need.

This article is cross-posted from 3DTV Buying Guide.