3M Streaming Projector With Roku Review: What A Cool Little Thing This Is!

A very nearly pocket-sized projector can't replace a full-sized one yet--but it is an incredibly fun toy. 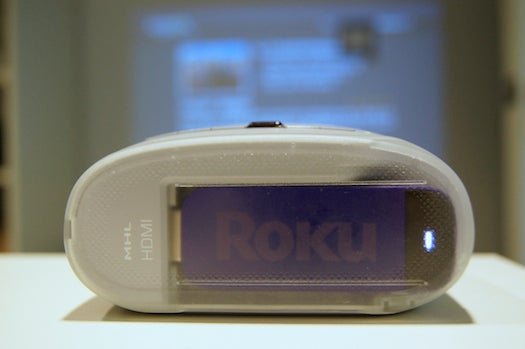 Pico projectors have been chugging along for awhile, getting better but never quite breaking that wall to become something we should all have. They seem so cool–a 120-inch picture in your pocket!–but nobody’s managed to really knock it out of the park yet. The tech still isn’t quite there, but the 3M Streaming Projector Powered By Roku (cool name guys) is by far the closest–it’s portable, self-contained, is the first to have a built-in Roku, and the price is just right. It’s not essential–it’s still basically a toy–but it is a really fun and surprisingly useful toy that you might actually use.

First thing to know about the projector is that it’s way, way smaller than you think it is. Like, it won’t fit in a pocket, but it will fit in a cargo pocket, or a jacket pocket. It’s just about the size and shape of my palm, and only two inches tall at its tallest. And it’s meant to be portable; it has content built in, sort of, in the form of a Roku Stick (a tiny but full-featured Roku that needs no extra power); it has a rechargeable battery; and it has speakers. So the projector can, theoretically, provide a home theater experience anywhere. It’s a really cool idea. 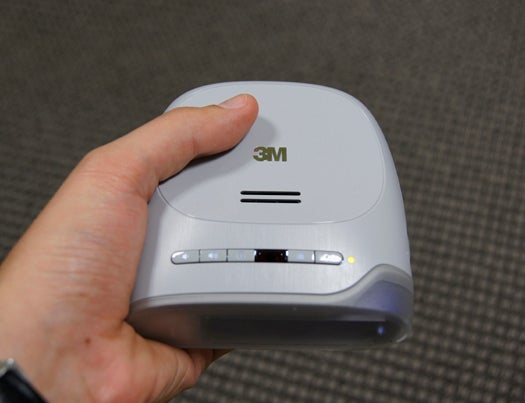 In the real world that’s tempered a little bit. The Roku does need Wi-Fi, the battery life is about an hour and a half at most, and the speakers are pretty tinny and unimpressive. But you can get around all that. I’ve used it with a mobile hotspot created by a 4G LTE smartphone (speeds are faster than my home internet anyway) and with a Jawbone Jambox, which sounds great and gets loud. That stuff costs extra, but combined with the projector, you can make a pretty legit full-featured portable theater.

Oh, right, the projector. So, its major weakness (and it has several weaknesses) is resolution. It’s WVGA quality, which means, roughly, 480p. DVD quality, not high-def, not Blu-ray. That’s noticeable when you’re used to an HDTV. The picture can expand to 120 inches–huge!–but I wouldn’t recommend it; the lacking resolution gets very noticeable above maybe 50 or 55 inches. It’s only a 60-lumen bulb (though it’s an LED bulb, so it shouldn’t need replacing), which is fine for a pico projector but means you really do need darkness. It’s perfectly usable in dusk, low-light rather than pitch-blackness, but the bulb just isn’t powerful enough to blast through daylight. There are minimal picture controls, too–just one little wheel for focusing.

But, I found the picture absolutely good enough for most uses. Yes, I wish it was better, but in a dark bedroom, it looks really pretty good. It has two flat sides so you can point it horizontally (at a wall) or vertically (at your ceiling), which is awesome. I wouldn’t want to watch The Tree of Life or anything amazingly visual with it, but I watched about four hours of The West Wing with it last night (cool guy over here) and it was totally serviceable. And a bigger picture than my TV! Out of this tiny little thing!

The Roku Stick is a surprisingly excellent idea. Not that Roku is bad–it’s a capable, if not particularly exciting, way to get Netflix, Hulu Plus, Amazon Video, and more–but I first wondered why they didn’t just build Roku software into the projector itself. This way turns out to be great: You get an included Roku Stick, which can be removed and used on any MHL-capable TV (admittedly there are about nine of those total at the moment, but they’ll be more popular soon), and removing it reveals an HDMI port that can be used with any HDMI gadget (Blu-ray player, computer, game console, another media streamer, whatever) without using any extra room. The Roku Stick fits right into the back of the projector, under a little cover–very neat. And you control it by using one remote for both the Roku and the projector. The remote is small and kind of hard to use but does the job reasonably well. (The Roku Stick, by the way, has pretty much the exact same software as the regular Rokus, only the hardware is shaped like a USB flash drive.) 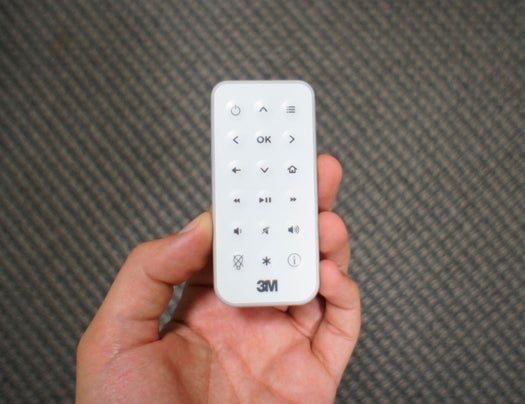 So the 3M Projector is a novelty, yes. You can’t really replace your TV or full-sized projector with it–it just has too many compromises in the picture department. But I really, really like the thing. It’s adorable and tiny and so easy to use, and the Roku gives it tons of content. And the price, $299, is so tempting; yes, pico projectors often cost around $300 or under, but this one is better than most. Major legs-up over its competitors: it includes a Roku Stick ($100 on its own) and it’s battery powered, which means you’ve got display, content, audio, and power, all in one tiny package. I don’t think it’ll change my life, like the Jawbone Jambox (another tiny, wireless version of a bigger home theater element), but I think the 3M Projector is great.

Plus, it’s really exciting for the future–here is a gadget that’s legitimately good, at a very low price. Imagine the next one! If they can keep the price at $300 but bump the resolution and the lumen count for the next generation, it could be a must-buy.

Product: 3M Streaming Projector Powered By Roku
Category: Pico projector
Price: $299
Cool bonus: You can pop the Roku Stick out and use it in any compatible TV
Rating: Inessential, but a very fun toy