3D Glasses: Can They Have Universal Appeal? 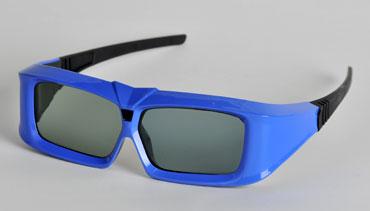 While 3D movies have been doing blockbuster business in theaters, for some potential viewers the idea of wearing (and buying) expensive, uncomfortable 3D glasses at home has all the appeal of Carrot Top/Pauly Shore double feature.

The 3D glasses you wear at home aren’t the cheaper, lightweight passive glasses used by most movies theaters in the U.S. That technology, developed by RealD, polarizes light from a projector, clockwise for the right image, and counterclockwise for the left image; the glasses have circularly polarized lenses so each eye only sees its intended image. While the passive glasses are incredibly cheap, theaters need to be outfitted with a polarizing modulator and a silverized screen to maintain the polarization. While a few companies are experimenting with passive polarized TV — Vizio, for example, recently demonstrated one at a New York trade show and said it would start selling them early next year—they’re generally more expensive to manufacture than the current sets, and there are questions about performance given the lower (1920 x 540 per eye) resolution.

Instead, the current crop of 3D TVs relies on active-shutter LCD glasses provided by the TV manufacturer. In addition to being pricey—about $150 or more per pair — and somewhat bulky, the glasses only work with the same-brand TV. But by the fall we should see the first “universal” 3D glasses that can work with most major-brand 3D TVs. Two companies, XpanD and Monster Cable, are leading the charge with 3D glasses they say will be out in September. While they aren’t going to be much—or, in Monster’s case, any — cheaper than current models, they will be lighter and a bit more stylish and, if the manufacturers’ claims are to be believed, they will outperform current 3D glasses. If so, it’s not hard to imagine the day when toting a pair of 3D glasses to a friend’s house is as common as bringing a six-pack of beer.

To create a successful 3D image, each eye needs to receive its own separate image — or actually, a slightly different angle of the same image. Our brain then processes the two images and derives a sense of depth from the distances. One of the toughest parts of the process is syncing the sequential opening and closing of the active LCD shutter glasses — done by applying voltage to the liquid crystals, just like an LCD TV — with the onscreen 3D content, so that one eye’s view is blocked when the other receives an image. If the glasses don’t respond quickly enough, or don’t go completely opaque or transparent, images meant for one eye can bleed into the other, causing crosstalk (ghosting), flicker, blurring, or other picture anomalies.

Complicating the matter for third-party eyewear makers is that so far there are no 3D sync protocol standards, so universal 3D glasses must be able to work with the growing array of proprietary protocols used by the TV manufacturers. That’s been the biggest challenge for XpanD, according to the company’s chief strategy officer Ami Dror. “The protocols are like a language, and Panasonic is speaking Chinese and Sony is speaking Swedish,” he says. “That requires us to speak multiple languages.” Because XpanD’s has been making eyewear for cinemas for years — it’s the dominant player in Japan and parts of Europe, where most theaters use active-shutter glasses, not passive models — XpanD’s 3D TV glasses “actually outperform the models offered by the manufacturers,” Dror says.

According to Dror, a specialized fast-switching liquid crystal cell, called the “pi-cell,” in the lenses of its active-shutter glasses helps to produce brighter images and reduce crosstalk (ghosting). The cells act as a shutter to alternately block each eye, operating at the 144 frames-per-second rate required for 3D digital cinema. The glasses are essentially in a continual sleep mode; about every two seconds they search for an IR signal, and if one is recognized the glasses “wake up” and lock onto the signal. Dror says that many of the complaints about 3D — headaches, nausea, etc. — occur when either a 3D TV or 3D glasses doesn’t perform properly. “The brain can sustain bad 2D — the loss of little resolution, some pixelization or missing frames — but it’s not as tolerant with bad 3D.”

XpanD initially intended to ship its X103 universal 3D glasses at the end of June, but postponed the launch to include sync codes for Sony’s recently released 3D TVs, as well as those arriving from LG Electronics this month. The software can be updated as new codes are released. The X103 glasses, available in September for $129, will work with almost any display — including plasma, LCD and rear-projection DLP microdisplays, as well as PC monitors — that can show 120-frames-per-second 3D content. Although the X103 glasses are sleeker than most OEM models and available in a choice of several colors, an even sleeker elite designer series, called the X104, will be offered in 2011 for more fashion-conscious users. A kids-sized line is also in the works. 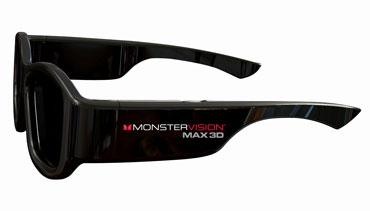 Taking a very unique approach is Monster Cable — its Vision Max 3D active-shutter glasses, also expected to arrive in September, will be the first to use radio-frequency (RF), rather than infrared (IR), technology to sync with the TV. Monster’s senior product manager Elbert Lee says the technology offers improved performance while eliminating typical IR issues, such as interference from room lighting or other IR devices, and losing sync when someone steps between the glasses and TV.

Physically, the Max 3D glasses are a bit larger than the X103 prototypes I saw. The transmitter uses a technology licensed from a company called Bit Cauldron to convert the IR shutter signals sent by the TV into 2.4GHz (ZigBee) RF signals, which communicate with a receiver embedded in the glasses. Lee says that as new 3D TV brands enter the market, updated IR codes will be available via the Monster Vision website. If you’re only going to use the Monster glasses you can place the transmitter in front of the TV to block its IR emitter, but moving it away from the TV allows you to use both the Monster glasses and those provided by the TV manufacturer. Unlike the X103 glasses, which use a standard replaceable battery, the Max 3D glasses have a rechargeable battery that rejuices via a mini USB plug. The Max 3D system, which includes one pair of Monster 3D glasses and a transmitter, will cost $250, while individual 3D glasses will be priced at $170 each.

Unlike the 3D glasses we’ve seen from some TV manufacturers, which use color-tinted lenses, both the XpanD and Monster glasses have a neutral tint. Although some have wondered if colors will be off when the TV shifts into 3D mode, since the TV’s settings likely compensate for the tint, Dror says any color inaccuracies will likely be negligible. “There are far bigger issues for 3D TV, such as providing a higher-quality, idiot-proof experience for the average consumer, who is unlikely to notice a 1% inaccuracy in color.” The relative insignificance of color shifts caused by universal active-shutter 3D glasses is a point echoed by Monster’s Lee. “Compared with the ability of a good pair of shutter glasses to go completely opaque or clear, small color differences is a fairly small issue. There was so much for 3D TV manufacturers to worry about at launch, I don’t think color correcting for glasses was even on their plate.”