Four millimeters thin. But not yet for sale. 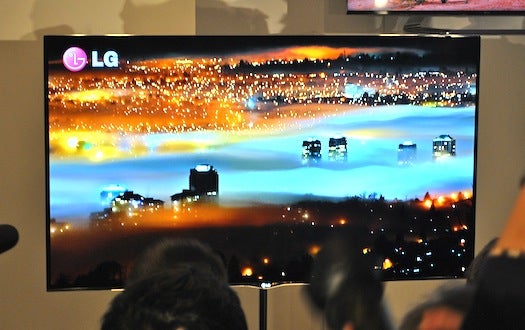 At the very first press conference of this year’s CES, LG started things off by making my (pretty nice!) TV feel like the 32-inch CRT that’s in my hotel room. There are precious few details about this guy, including when (or if) it will ever go on sale. But based on my limited time with the screen, crammed in with a hundred other people at the press event, I am very, very impressed.

It’s a 55-inch OLED TV, which makes it one of the largest OLED screen in the world (though we’re expecting other companies, especially Samsung, to show off equally large OLEDs soon—perhaps even later today). OLED has been traditionally a kind of dream screen technology; blacks are incredibly deep, colors pop, clarity and motion are unparalleled. It’s also famously hard to work with, and OLEDs have mostly been restricted so far to small screens, like on some portable devices and the twin tiny screens of Sony’s bonkers head-mounted display. OLEDs are expensively difficult to scale up to full TV size, and every year, CES tends to be the showplace for the biggest and best–even if those rarely show up in stores.

LG’s as-yet-unnamed-and-unpriced set is a whopping 4mm thick (LG used the almost-correct “Paper Slim” catchphrase, which might not catch on), with a stylishly tiny bezel. It’s a very nice-looking set, very high-end. But the picture quality, oh man. Colors are lush, bright and vibrant, motion is crisp but not too crisp, blacks as deep as deep space. LG had a dozen or so of its actually-available-for-purchase top-of-the-line TVs scattered around the stage, but this thing wiped the floor with them.

Will this be the year that large OLED TVs make it to the stores? Probably not for LG: they’re giving no word on this set’s price, or if it will even see a store shelf at all.