Watching the World Cup On a 3-D TV: Is Anyone Tuning In?

With the recent hubbub over 3D TV, I wanted to find out if people could take the technology seriously. So I called all my friends over to watch the World Cup 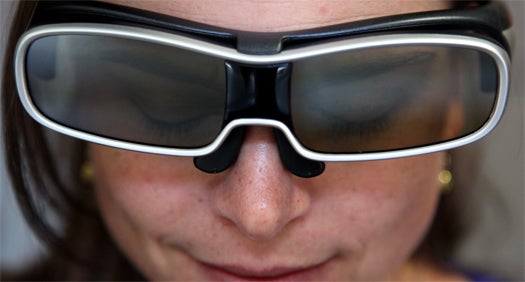 When I decided to invite some people over to my house last Friday to watch the World Cup on a new 50-inch plasma 3-D TV, a loaner from Panasonic, I made the mistake of emailing out a picture of myself wearing the 3-D glasses. My brother, bless him, replied, “I love the third dimension!” Everyone else seemed a little put off. “If I can extract a promise that no photos of me will appear on Popsci.com, I’m in,” emailed one friend.

I can understand the hesitation. 3-D glasses flatter no one. You’d feel less conspicuous wearing a clown nose. But that was the half the point of the party. With the recent hubbub over 3-D TV, I wanted to find out if people could take the technology seriously. Can you wear the glasses without feeling as though you’re part of the entertainment? Is it possible to enjoy an entire soccer game with such an awkward, uncomfortable accessory strapped to your face, and in the company of others? I figured I’d let my friends be the judge. And judge they did.

In case you’ve missed the advertising blitz, Panasonic, Sony and Samsung have all begun selling 3-D TVs this summer, and in June ESPN launched the first 3-D channel, with World Cup soccer as its inaugural offering. The relative few people who’ve had the opportunity to watch the new sets are raving about the picture quality. As Panasonic’s VP of 3-D technology Peter Fannon says, “I’m delighted to say the damn thing works.” But for all the legitimate advances in screen technology, engineers have yet to solve 3-D’s Achilles’ heel—the dignity-stealing eyewear needed to trick your brain into registering depth. In fact, stylistically, the new generation of glasses seems to have taken a turn for the worse. Bulky, plastic specs replace the simple cardboard and cellophane frames of yesteryear, and cost up to $180 each. Panasonic calls its 3-D glasses “active-shutter eyewear.” The darkened lenses are battery-powered to flash in sync with images on your TV, and come in one size—humongous—with a detachable rubber nose bridge that sometimes sticks to your face when you remove the glasses. Like I said, the tool factor is hard to ignore.

Yet despite this, and despite the frightful picture of me offering up direct evidence of said tool factor, people did show up, they did wear the glasses, and they did seem to enjoy the spectacle of Brazil battling Ghana in 3-D. In fact, nearly everyone expressed genuine surprise over the 3-D effect once they got over the jokiness of the glasses, uttering some variation of, “Wow, it’s actually pretty good.” The ground-level shots filmed from the sidelines drew the most ‘oohs and ‘aahs.’ They gave the uncannily realistic illusion of little men running around inside the TV, Wonkavision-like, although people expecting to see soccer balls and cleats fly into their face were disappointed. Those shots never materialized. The graphics popped the most, which sometime proved irritating, as there was the temptation to swat at the scoreboard whenever it floated into the middle of the screen.

The 3-D effect was less impressive when the cameras switched to aerial view. From this vantage the game seemed to flatten back into two dimensions. Capturing depth perception at different distances is one of the big challenges of filming in 3-D. Cinematographers use two cameras—one for each eye. Filming distant action requires widening the length between the cameras, which in turn sacrifices depth of field. So the closer the shot, the better the 3-D. Contact sports like boxing and ultimate fighting, where in-your-face ringside shots dominate, would be killer in 3-D. Soccer, meh.

If there’s one advantage to the oversize specs it’s that they fit comfortably over conventional glasses, allowing the four-eyed to become six-eyed with little hassle. Fannon says in the future people will be able to order their own prescription 3-D glasses through their eye doctor. That would be cool but even cooler would be 3-D TVs that don’t require glasses at all.

Since that’s not going to happen anytime soon, Fannon says, we’re stuck with the eyewear. And people seemed to grow tired of it pretty quickly. I maxed out after about 15 minutes. It’s true that Panasonic’s 3-D TV has mostly solved the problem of “cross talk,” where the lenses fail to open and close fast enough to keep images intended for one eye from contaminating the other eye, resulting in a blurry picture and a murderous headache. But eye and brain fatigue is still an issue, as acknowledged by the disclaimer about the potential for dizziness and illness that pops up on the screen before you start watching any kind of 3-D programming. With images flashing before me 120 times each second, I definitely got the worrisome feeling that something bad was happening to my brain, like I might be one flicker away from a seizure. And 3-D content is a blurry mess without the glasses. So once the novelty wore off (within an hour of turning the tube on) we wound up switching the channel back to two-dimensional ESPN for relief.

Perhaps more disruptive than the glasses, though, is the fact that 3-D TVs are incompatible with everything. To view ESPN 3-D, I needed a DirecTV satellite signal (currently only DirecTV, Comcast, and AT&T’s U-verse provide 3-D content), a special 3-D set-top box, a special 3-D receiver if we wanted to use our current Surround Sound setup and a special 3-D Blu-ray player if we wanted to watch movies in 3-D (and options right now are fairly limited).

So, is it possible to take 3-D TV seriously? My informal focus group says, “Hell no.” But I’m hopeful that will change soon. In three to five years, assuming the technology matures, formats unify, camera work improves, prices drop, glasses shrink (if not disappear entirely) and content broadens, I think 3-D stands a reasonable shot of becoming standard issue on most tubes, just as HD is today. Until then, it’s hard to justify spending an extra $500 or so on a TV for it. In this case it’s better to let those early-adopting masochists pave the way.