At Nintendo’s launch event today, I played a dozen games on the 3DS, their forthcoming 3-D handheld system. Having previously... 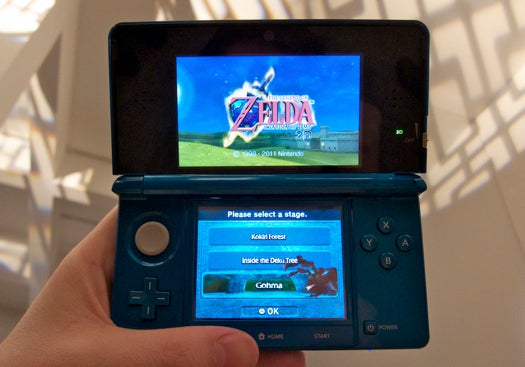 At Nintendo’s launch event today, I played a dozen games on the 3DS, their forthcoming 3-D handheld system. Having previously spent a few minutes with it at CES, along with a bevy of other 3-D gaming gear, after today’s playing I’m ready to make a declaration: 3-D’s killer app is not movies and television. It’s gaming. Here’s why.

This feeling began to solidify for me earlier this month at CES. Being a 3-D skeptic at CES is like being a vegetarian at a 24-hour all-you-can-eat prime rib buffet. But there I was, facing a tidal wave of 3-D products head-on for the second year running and, frankly, still not feeling at all excited about our extra-dimensional future. That is, until I spent about 20 minutes playing Call of Duty in 3-D on a Toshiba 3-D laptop.

Here’s the main problem: right now, the 3-D experience sucks when more than one person is involved. Out of the confines of a theater, watching video entertainments with others almost always begets multitasking. You want to discuss the movie, make jokes, eat a snack, maybe browse the web on your laptop or tablet. Channel surf. You’ll occasionally want to get up and walk around, and see the TV from different angles while doing so. You’ll watch sporting events or favorite weekly shows with big groups. These activities range from annoying to just plain impossible with current-gen 3-D TVs and their limited viewing angles, required glasses and blurry picture for anyone not wearing a pair.

What snapped into focus while playing the Nintendo 3DS and Black Ops on a 3-D laptop is that we don’t multitask while playing games. Especially in a single-player setting, at home or on a handheld. In this environment, 3-D makes so much more sense. It’s just us and the game–no need to accommodate other activities. Plus, in a gaming environment, many players are already used to donning geeky accessories like earpieces to talk trash online, or fancy surround-sound headphones for PC gamers. Adding glasses to that mix doesn’t feel as awkward and uncomfortable.

Plus, in a fully synthetic environment, the 3-D effect is more enjoyable, and more powerful. Many people I’ve talked with about 3-D enjoy digitally animated features like Toy Story 3 or Despicable Me more than live-action films. The all-digital scenes in Tron were much cooler in three dimensions than looking at the actual humans (even Jeff Bridges’s freakish youth mask). This is true too for games. As good as computer animation is today, it still inserts a degree or two of separation from reality; in this environment, the fantastical nature of 3-D feels more at home.

Additionally, there are more elements to take on the 3-D effect in games. Your HUD or on-screen radar map can hover pleasantly above the action. The best 3-D effect is that of depth, looking into the screen rather than having objects flying out at you. In a first-person shooter, a sense of depth truly adds to the realism of the environment. In just 20 minutes of strafing long corridors and peering over cover, I felt more excited by Call of Duty than I had at home on the Xbox in quite a while.

Nintendo’s move with the 3DS proves that they’ve figured this out, too. Not only is the 3DS an experience for two eyeballs only, it also nixed the glasses by using a nifty parallax barrier display. A slider varies the intensity of the 3-D effect from zero (good ol’ 2-D) to strong, at any time, in any game. A great feature.

So I must say, I’m excited for the 3DS. And in turn, I can now at least entertain the thought of having a 3DTV (or, perhaps more practically, a 3-D-capable computer monitor) in my home, one day, for gaming.