TVs are about to get bigger. Way bigger.

Images are about to quadruple in size. Here's how they'll look. 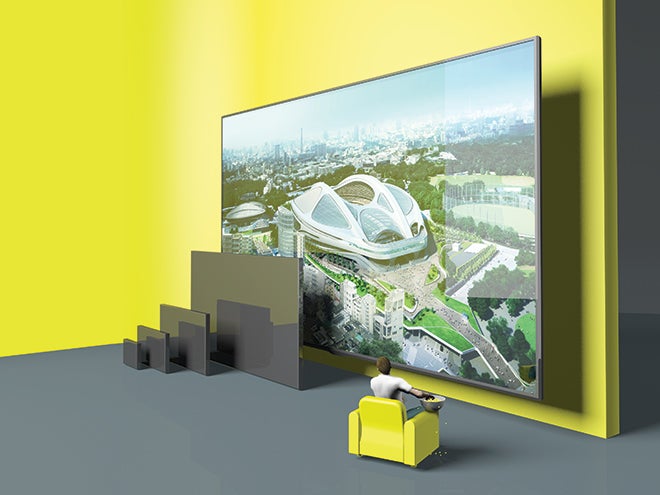 Muppet Babies probably looked plenty clear on the 20-inch standard-definition TV that sat in the corner of Mom’s living room in the late ’80s. That relatively low-res picture had the equivalent of 25 pixels of image data per inch; blow it up much beyond 32 inches, and Baby Kermit’s nappy would start to split, revealing gaps and jagged edges. Let’s call that size the image’s breaking point. Apply the same density of color blocks to modern high-def screens, and you can figure out just how massive they could get before they’d fissure. Take a look.

Tube TVs didn’t have pixels like flat-screen sets do, but it still took image-processing trickery to make them any larger than 3 feet.
Pixels (Equivalent): 307,200 Image Breaking Point: 32 inches

The most common resolution for boob tubes, 1080p high-def can blow up about as large as a full-size mattress before it splits.
Pixels: 2,073,600 Image Breaking Point: 88 inches

Ultra-high-def content from Amazon, Netflix, and Blu-ray disc can stretch as big as the broad side of a UPS truck.
Pixels: 8,294,400 Image Breaking Point: 175 inches

When Japanese public broadcaster NHK beams out the 2020 Tokyo Olympics, the 8K footage will be able to fill a billboard.
Pixels: 33,177,600 Image Breaking Point: 352 inches