Glasses-Free 3D Deserves to Shine, But Still Needs Time In the Oven

The case for real 3D immersion, without the hokey glasses 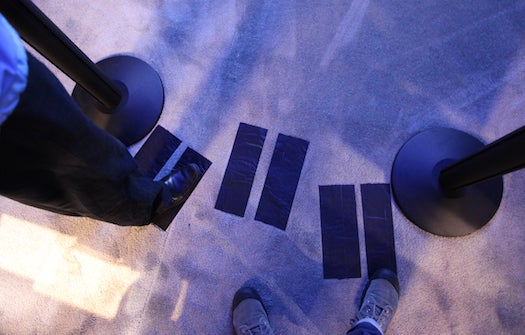 3D glasses are a hot topic at CES 2011. Monster has been bragging about their $250 pair that works with any 3DTV. Samsung debuted their “lightest pair ever,” weighing in at just one ounce. And Vizio — among others — have been touting the fact that their passive 3DTVs work with the cheap-o polarized glasses you get at the movies.

But what has really caught our attention are those that have managed to nix the eyewear all together.

Three companies currently have glasses-free 3DTV demos on the show floor: Toshiba, LG and Sony. Samsung’s glasses-free solution is MIA despite making an appearance at last year’s initial 3DTV. Sharp has several devices that use the technology, but none of them are TVs. A rep from Mitsubishi came right out and told us that they don’t have much interest in the idea until the technology is more “figured out.” Panasonic too.

It’s all a little disappointing.

Our first experience with glasses-free 3D at this year’s show was with Toshiba’s 65-inch panel. We lined up our toes with the black footprints carefully taped to the ground and it still took several seconds to lock onto the 3D effect, which was surprisingly easy to lose. When the effect is working, it’s more subtle than with active or even passive glasses, but even when you’re properly aligned, the film that helps create the 3D effect gives the look of a screen door overlaying the screen. When it’s not working? Break out the Aspirin.

Despite its short comings, Toshiba is the only manufacturer on the floor who will at least speculate on bringing their solution to market, and before the end of this fiscal year no less. Toshiba reps claim that they’re working hard to improve the viewing angle issues, but even if that’s solved there are still plenty of barriers to overcome. In order to deliver full-HD 3D without the shutter effect, they need to use a 4K panel (one with approximately four times the resolution of 1080p HD), which means just about everything you’ll watch, including Blu-ray, will need to be upscaled (and that the panel itself will be ridiculously expensive). Watching just about any kind of broadcast TV is going to result in an extremely ugly experience.

LG’s panel looked dedidedly better, even though it’s being touted as little more than a “future 3D technology” demo. They opted for a 55-inch, 4K side-lit panel with local dimming which drastically improved the picture quality. They say you need to sit in a sweet spot about 12-feet away to maximize the effect, but it works to about 14-feet. 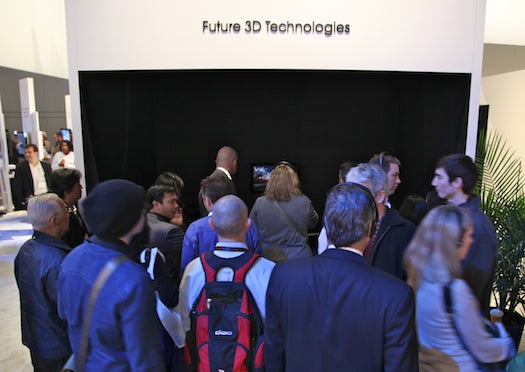 Sony booth-goers watch their 24.5-inch glasses-free OLED TV, which like all glasses-free prototypes is displayed in a darkened environment

While LG’s panel is encouraging, it’s clear that Sony is going to have to bear much of the burden in pushing glasses-free tech forward if they want to cash out on having bet the farm on 3D. They brought three prototype displays with them to show off. Unfortunately, and in typical Sony fashion, they’re extremely reluctant to give up specifics. Their 56-inch 4K TV is easily the best looking of the bunch. The viewing angle is solidly ahead of everyone else, it churned out excellent blacks (in the blackout-curtained viewing room, anyway), and the screen-door effect that plagues the Toshiba is far less noticeable.

Unfortunately, the only other info we were able to squeeze out of the person manning the demo was that there was “an entire room full of gear” behind the TV making it go.

Despite its diminuitive size, Sony’s 24.5-inch OLED display is also a good reminder of how much potential glasses-free 3D has. The high pixel density and ridiculous contrast ratios offered by OLED give it serious punch, even though it’s only a traditional 1080p screen as opposed to 4K.

Glasses-free 3D tech has made its way into all kinds of other tech on the show floor this year, too. You can find everything from smartphones, laptops, digital photo frames to mobile TVs like Sony’s 10.1-inch portable concept. But the focus really needs to shift back to the big screen where 3D can achieve its ultimate goal: immersion, without the hoaky eyewear.

This article is republished from our sister site Sound+Vision