See how much sugar is packed into ‘healthy’ food 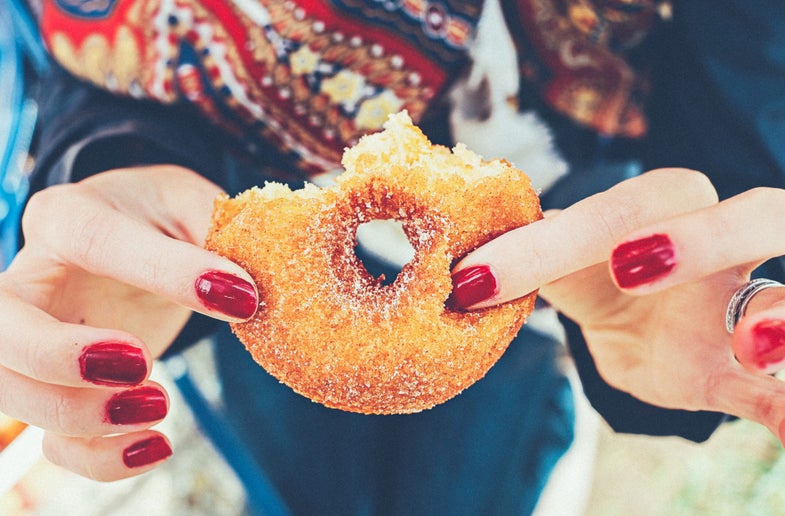 Cadbury cream eggs are the height of sweetness. The milky substance on the outside barely qualifies as “chocolate” and the oozing fondant within is almost pure sugar. It’s possible the foil wrapper is the most nutritious part.

When I think about eating a Cadbury cream egg, I gag a little. I once unwrapped one to see if they tasted like my childhood and stopped seconds later when the sickly smell of it hit my nose. It’s not that they have the most sugar of any candy—a standard Snickers bar has more—it’s that they’re unadulterated. It’s sugar for sugar’s sake. It’s as pure a glucose rush as you’ll find anywhere, unsullied as it is by any flavors that might mask the sweetness.

And ever since I read the following xkcd comic, Cadbury cream eggs have been my internal barometer for sugar content.

I have no natural sense of how much sugar 18 grams is. But if I think about the fact that it’s just two grams shy of a creamy egg that makes me want to vomit…now that’s a visceral image. And it’s an especially useful tool when assessing unexpected sources of sugar. I know my Frappuccino has a frankly upsetting amount of sugar (69g for a grande vanilla frap), but I’m less likely to expect it in my tonic water. And yet there it is, hiding out with my gin and lime wedge.

There are 23 grams of sugar in a can of tonic water. There are 20 grams of sugar in each Cadbury cream egg. The fact that I don’t think of those foods equally isn’t inherently problematic: I value a couple G&Ts on a warm summer’s night far more than I would a fondant egg, and if it’s worth the calories I’m gonna go for it anyway. But it is worth remembering the Cadbury scale when you’re downing something like cold-pressed Spicy Apple Juice from BluePrint, which I can only assume people drink because they think it’s good for them. But it isn’t.

Hidden sugar is already enough of a problem—let’s at least find a way to keep it in perspective. I vote for the Cadbury scale (click the arrows to enlarge):

Take special note of the donut at the far left end of the scale there. I looked up Dunkin’ Donuts’ nutrition facts because I needed more items to fill out the 2-2.5 egg part of the graph and was sure that even the most basic donut would suffice. Turns out donuts have, on average, less sugar than cold pressed juice. The most sugary of them all, which looks like some unnecessary Midwestern take on a Boston Cream Pie, tops out at 37g of sugar.

And let’s just take a sec to talk about breakfast cereal. It’s a pretty common food on the list of “things you don’t realize have lots of sugar,” but it’s still somehow surprising that Raisin Bran has 18g of it in one cup. Cinnamon Toast Crunch—which, need I remind you, is literally covered in cinnamon sugar—has 12g. Lucky Charms somehow packs lots of tiny marshmallows in and is still only has 13g. Admittedly, Raisin Bran has more dietary fiber than either of the kids’ cereals, and that offsets some of the sugary downsides in the whole “is this cereal healthy or what” equation. But come on. 18 grams!? I guess you can’t get people to eat cereal with freaking raisins in it without packing in sweeteners.

The point here isn’t “don’t eat Raisin Bran” (though honestly, why do you want to eat cereal with raisins in it?). The point is to be aware of how much sugar you’re unconsciously consuming. If you would find it gross to toss back most of a Cadbury cream egg alongside your breakfast, think twice about that large bowl of cereal. Maybe you’ll decide it’s worth it for the fiber, or purely for the enjoyment of bran and raisins. Maybe you’ll decide that soda isn’t worth the sugar, but tonic water is. Or maybe the point is that you can eat a lot more Cadbury eggs than you thought you could. It’s all pretty much the same thing.