Can food have negative calories?

Eating celery with your burger is not going to help you lose weight. 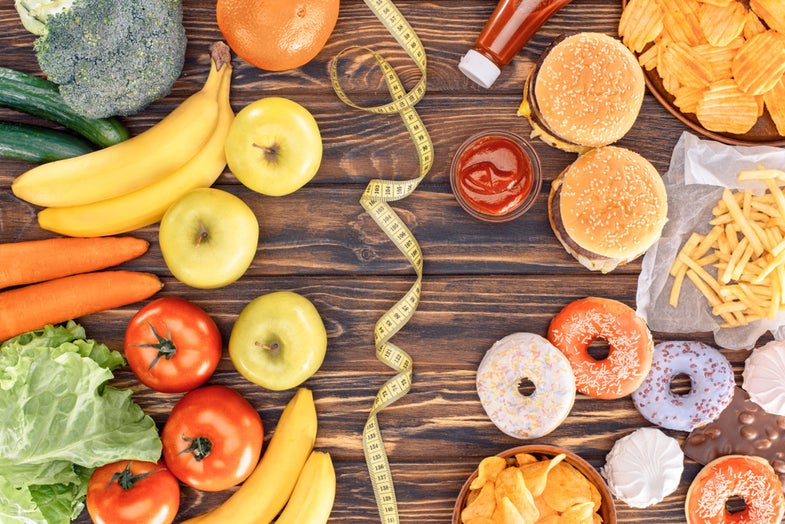 Healthier options should replace higher calorie foods in a meal, not just be added to it. LightField Studios/Shutterstock
SHARE

Diets are everywhere, but could eating “negative calorie” foods, such as celery and grapefruit, help to boost weight loss? A calorie is a unit of energy, usually expressed as kilocalories (kcal) for the energy content in food. The theory behind negative calorie foods is that some foods have lower calorie (energy) content than the amount of energy it takes to digest and absorb the food into the body. This sounds plausible, in theory. But in reality, even the lowest calorie foods, such as celery, contain more calories than it takes to break down and absorb them in the body. Our energy needs are made up of three components: • The energy needed to maintain a body at rest, which is the energy needed for our body to carry out its basic processes so we can live. • The thermic effect of eating, which is the increase in metabolic rate after eating, while food is digested and absorbed. • Additional energy needed for activity and exercise.

Of these, the thermic effect uses the fewest calories—about 10% of the energy we take in. In other words, about a tenth of the calories we eat are used to process our food—this includes chewing our food, moving it through the digestive system, absorbing nutrients, and storing excess energy.

Foods such as celery, grapefruit, broccoli, tomatoes, and cucumber have all been touted as negative calorie foods, but there is no scientific evidence to support this idea. Although they are very low calorie foods, with seven to 30 kcal per 100g, it still takes less energy than this to process them. This is because they contain large amounts of water and fiber, which have a very low energy cost.

These foods are very useful for people who are trying to lose weight, as they contain a low number of calories. By replacing the food in your diet with some of these—for example, replacing a side portion of chips with a side salad—it is possible to lower your calorie intake considerably. As an extra boost, they are full of nutrients, such as vitamins and minerals, and also contain a lot of fiber, which also has many benefits for your health.

It’s important to replace higher calorie items on a plate rather than add these fruit and vegetables to meals, as by simply adding healthy items you increase the overall calorie content. For example, a cheeseburger plus a salad contains more calories than a cheeseburger alone.

In order to lose weight, people need to use up more energy than the energy (calories) they eat and drink, but this is difficult. Research has shown that people tend to underestimate the calorie content of the food they consume, and they underestimate it by more if they are obese rather than normal weight.

Researchers have also shown that when people visit fast food chains with a healthier image, they underestimate the calorie content of their meals compared with the same meals at a restaurant with a less healthy image, and may end up consuming more calories overall.

Another difficulty is keeping weight off in the long run. Many studies have shown the short-term benefits of diets to help with weight loss, but over 80% of people put the weight back on again over time. In many modern societies, there is easy access to cheap high-calorie foods, so it is difficult to resist high fat/sugar options on a permanent basis.

Unfortunately, negative calorie foods are a myth, and there is no easy way to lose weight and keep it off in the long run. Changing your food and drink options for healthier ones on a permanent basis is more likely to lead to sustained long-term weight loss than short-term dieting alone.

Louise Dunford is the Director of the Institute of Allied Health Sciences Research at De Montfort University. This article was originally featured on The Conversation.