Sadly, they only made 106 and they're all sold out. 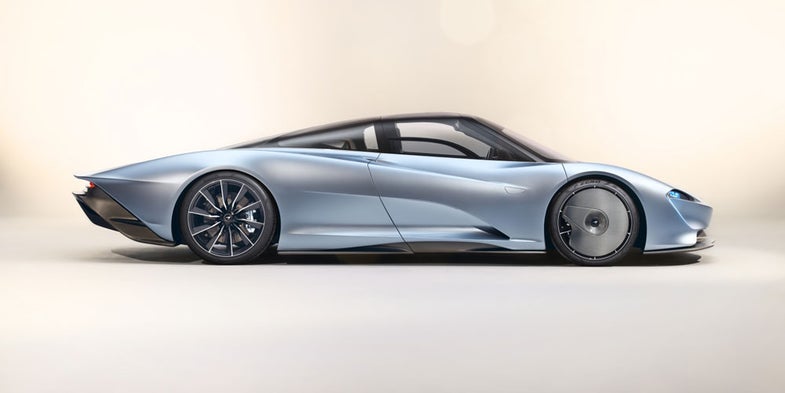 Five years ago, the holy trinity of hypercars was the Ferrari LaFerrari, the Porsche 918, and the McLaren P1. Now all three are discontinued, and it’s time for new machines to take their place.

The McLaren Speedtail is the first contender. It’s an impressive collection of automotive engineering feats that tally up to a price tag of $2.4 million. The company made just 106 (same as the original McLaren F1) and all of them are already sold. But, we can still admire it from afar.

The cockpit is teardrop-shaped, with a center seating position for the driver, like in an F1 car and the McLaren F1, the Speedtail’s spiritual ancestor. There are three seats, so you and two pals can go along for a ride, up to 250 mph. That’s possible thanks to a hybrid powertrain that delivers 1,035 horsepower, up from 903 in the P1 from half a decade ago. The Speedtail can go from 0 to 186 mph in 12.8 seconds. That knocks nearly four seconds off the P1’s 16.5 second 0-186 time, which is mind-boggling technological advancement in just five years.

To attain that 250 mph top speed, the car has a special “velocity” mode that optimizes the hybrid system for (very) high-speed driving, while adjusting the active rear aerodynamic components for reduced drag and pulling the retractable rear-view cameras in the doors (in lieu of mirrors for exactly this purpose) out of the windstream. The active suspension lowers the car by 1.4 inches, putting the highest point of the Speedtail just 3.7 feet from the road. Don’t hit any potholes.

Airflow is paramount when for ultra-high speed runs, and McLaren appears to have put all of its aerodynamic knowledge into the Speedtail. The press release announcing the car goes on about aero for hundreds of words. Here are some of the high points:

The aero talk goes on for another 800 words, which you can read if you’re so inclined.

The driver sits in a F1-inspired, reclining driving position at the center of the car, which McLaren says is “easy to slide into” but still “subtly holds the occupant in place.” It looks like a fighter-jet cockpit. The glass “porthole” above the driver’s head, the rear quarterlights above the passengers, and the top section of the doors are fitted with electrochromic glass, like a Boeing Dreamliner. They all dim at the push of a button. The top of the windshield has the tech too, eliminating the need for sun visors.

Naturally there’s carbon fiber everything on the outside and leather everything on the inside, and, given that this is being called a Hyper-GT car, it’s meant to be an extremely comfortable place to spend a few hours. Everything in the car, from the exterior color, to the leather, to the color of the stitching, is totally customizable. McLaren says it’s highly unlikely that any two Speedtails will be alike.

Which is good, because if you’re one of the 106 buyers who will receive delivery starting in 2020, you wouldn’t want to park next to an identical Speedtail down at Whole Foods. That would be embarrassing.