Strapping into the 2020 Chevrolet Corvette Stingray to take turns at 1.3 Gs

We drove the C8, the most exciting new Corvette since the ’63 Split Window. 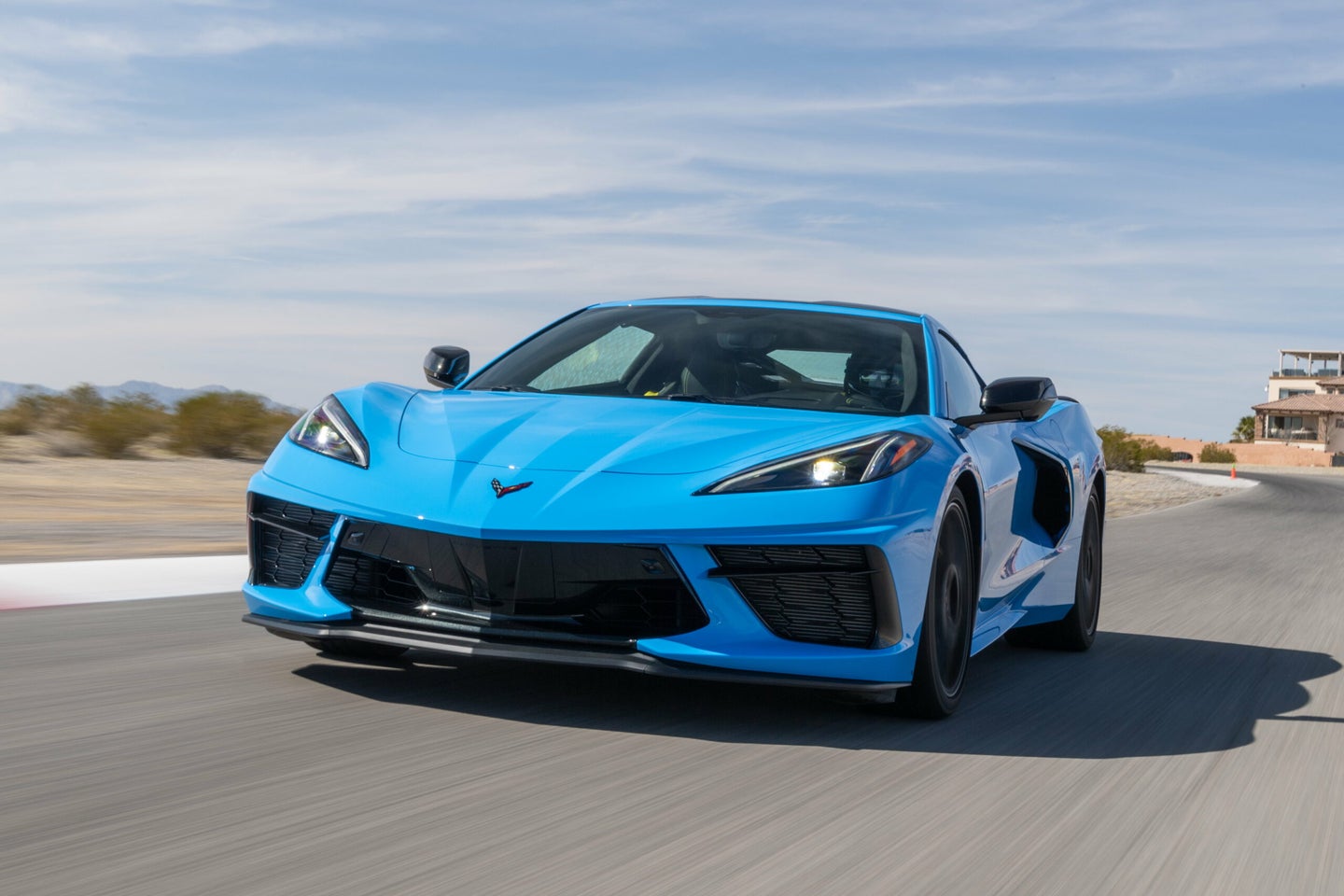 On the street, the eighth-generation Chevrolet Corvette Stingray—aka the C8— draws waves and shouts like no Corvette in memory. The vehicles also fulfills a long-explored switch to a mid-engine layout, like the configuration of exotic European supercars from Ferrari and Lamborghini.

At the track at Spring Mountain Motor Resort in Nevada, we were able to lap behind instructors from the Ron Fellows driving school who were in 2019 Corvette ZR1s. Before I slid into that seat, the Fellows crew hands me a black balaclava to line the white open-face helmet, while they lock the helmet into a chest-wrapping hybrid Head And Neck Support (HANS) device in anticipation of my high-speed laps. With the HANS cinched tight, I get in.

I power the seat all the way back with its electric adjuster. Then I pull the seat belt all the way out to activate the ratcheting adjuster, which in most cars is used for tightening the belt onto an infant seat. By locking the belt in place and then powering the seat forward into the correct position, it pulls the regular three-point seat belt tight, providing a quick alternative to a racing harness to help hold the driver in position.

The Corvette will pull 1.3 Gs of cornering force on this track, and while the car is equipped with competition seats, tightening the belts down like this helps hold the driver in position to focus on the steering, rather than using the steering wheel to hold on.

That ratcheted-down seat belt also helps better secure the HANS device, so it will be more effective in the event of a crash. Not that we’d crash Chevy’s $83,330 test car. That was the bottom line cost for our track vehicle, with its 3LT premium equipment package, Z51 performance package and magnetic ride adjustable shock absorbers.

Pressing the Start button brings the ‘Vette’s 495-horsepower, 470 lb.-ft., LT2 6.2-liter small block V8 to life. The engine’s sound is muscular and menacing at all speeds, with the rumbling threat of power to come at idle, and the ferocious blast of Nascar thunder as revs climb to the 6,500 rpm redline.

But some of this superbly inspiring soundtrack is, alas, actually electronically enhanced. Assistant chief engineer Mark Stheiner goes to lengths to explain that it isn’t really fake sound, because it is sound that the engine can and does make. However, the reality of requirements such as catalytic converters in the exhaust stream take a chunk out of the small block’s aural spectrum, producing a less satisfying voice at the exhaust pipes. So in the cabin, the car’s stereo system puts those frequencies back in place to produce a true V8 sound, but the sound of one without pollution-scrubbing catalysts.

Away from the track, the V8’s fuel consumption is EPA-rated at 15 mpg in city driving and 27 mpg on the highway, which is good for a supercar. On the track, we have to guess the fuel economy is, um, worse.

In the mid-engine C8, the compact pushrod V8 is located behind the cabin, visible to the passenger if they twist around in their seat and crane their neck to spot it. The driver can see a little bit out the back through the rearview mirror.

The mirror doubles as a display for a rearview camera that is mounted atop the engine cover to provide an expansive view behind the car that isn’t possible from anywhere inside the cockpit. This is helpful for visibility, but the camera’s unfamiliar wide field of view and unnatural video-camera brightness make it feel odd in regular driving. Maybe we’ll get used to such devices over time, but for now, I prefer the plain mirror, restricted view and all.

The Corvette’s center console is anchored by a rotary selector wheel that is mostly covered by a wrist rest that keeps the driver’s hand stable while adjusting the knob. Sitting stationary in the pit lane, I scroll through the car’s drive modes to select Track, and then dial up Sport 2 for the electronic stability control mode.

The Corvette has a unique shifter solution, with a compact row of buttons along the car’s longitudinal axis. It employs conventional push buttons for Park and Neutral, and lift buttons that you curl your finger beneath (like with many power window switches) for Reverse and Drive. The ability to feel these different buttons and their different actuation methods makes the Corvette’s shifter an above-average execution of the push-button shifter concept.

With the car in Drive, I begin to edge toward the pit exit to start lapping behind my lead driver ahead. Creeping forward, the 8-speed Tremec dual-clutch transmission exhibits some shuddering as the clutches slip, trying to do their best impersonation of a planetary automatic’s buttery smooth and torque-multiplying torque converter. Stheiner says this issue was resolved in the final software programming for the first true production models for customers. “We made some calibration changes that address that,” he says.

Underway, the computer-controlled dual-clutch transmission can shift itself, like an ordinary automatic transmission, or the driver can take manual control of upshifts and downshifts using the steering column-mounted shift paddles.

We roll out onto the track and my lead driver reminds me on the radio that the Michelin Pilot Sport 4S tires are still cold, so we steer into the sweeping, medium-speed first turn at a modest pace to begin bringing the tires to operating temperature. The run-flat Pilot Sport 4S tires come with the Stingray’s $5,000 Z51 performance package, which also includes an electronic limited slip differential and aerodynamic upgrades.

When the tires are warm, the Z51-equipped Stingray can launch to 60 mph from a standstill in 2.9 seconds, and thanks to an automatic launch control system, it can do it time after time.

Powering through the ensuing curves, grip starts to build and I can push the car harder. Even in its new, improved mid-engine configuration, the 495-hp C8 Stingray is no match for the lead driver’s 755-hp C7 ZR1. This was exacerbated by the C8 Stingray’s use of Michelin’s Pilot Sport 4S tires rather than the maximum-performance Pilot Sport Cup 2 tires on the ZR1. The ZR1’s power and grip advantage, combined with its driver’s intimate knowledge of the track, left my lead driver the surplus bandwidth to lap while seemingly only looking in his mirrors to provide feedback and coaching to help me learn the circuit over the walkie-talkies.

The practical run-flat PS 4S tires have presumably longer tread life in street driving, but on the track they produce noticeably more squeal in turns that more performance-focused Cup 2 rubber. The slightly lower grip threshold of these tires provides ample opportunity to experience the Stingray’s improved balance, thanks to the 40/60 front/rear weight distribution that lets the driver steer and point the Corvette precisely using the accelerator. The benefits are even more clear on corner exit, where front-engine Corvettes demanded delicacy to accelerate without sliding the rear of the car.

I’d have had more latitude to slide the car around a bit with the stability control in Track mode, but in the Sport 2 setting the ‘Vette is still able to build slip angles in turns and wiggle under braking and turn-in. I am never able to identify any interventions by the computer, unlike in the bad old days when such systems clamped down on the car’s performance intrusively. However, in the data overlay from the Performance Data Recorder, you can see the flicker of imperceptible mid-corner stability control activation once or twice.

The Stingray’s Brembo brakes are impressive, with a firm, communicative pedal, demonstrating strong friction but not gripping so abruptly as to upset the car. Hammering the pedal with strong initial application at the end of the track’s one straight helps shed speed quickly so the driver turns the car into the subsequent mid-speed right and keeps it balanced before eventually slowing more as the turn tightens. The benefit of having its mass centralized by the mid-engine layout gives the Corvette a fundamentally benign character that invites balancing the sliding car at its limit.

While driving in Track mode, the transmission makes mostly faultless decisions about gear changes, banging off redline upshifts and clicking down through the gears while braking smoothly enough to avoid upsetting the car. There were occasional two-gear downshifts while accelerating out of slower corners that seemed to have the potential to disturb the Corvette’s balance, so in those instances I’d have probably clicked it down only one when shifting manually on the paddles.

Those paddles are nice ones, which, like Ferrari’s and Lamborghini’s, are mounted to the steering column where they can always be found in the same places even while turning. Previous-generation Corvettes were frequently criticized for the delay between a pull on the shift paddle and the transmission’s response.

This time, engineers wired the buttons directly to the transmission’s shift controller, bypassing the car’s Controller Area Network, which can get clogged with traffic, to send shift requests straight to the transmission. It works. This Corvette responds instantly to shift requests. The paddles also shift to Neutral when you pull both of them at the same time. This is important, because as much as the Corvette lives up to its exotic new appearance with its racy on-track performance, there are also calls from bystanders who are hoping to hear a bit of the LT2’s exhaust note, which is easy to deliver with a quick shift to Neutral.

Passers-by are fired up about America’s new sports car, and it’s nice to give them a quick acknowledgement. If these fans can’t visit Spring Mountain themselves to pilot ‘Vettes from the Fellows school on track, at least they can imagine doing so, courtesy of a quick blast of exhaust sound.