It drives much lighter than it actually is. 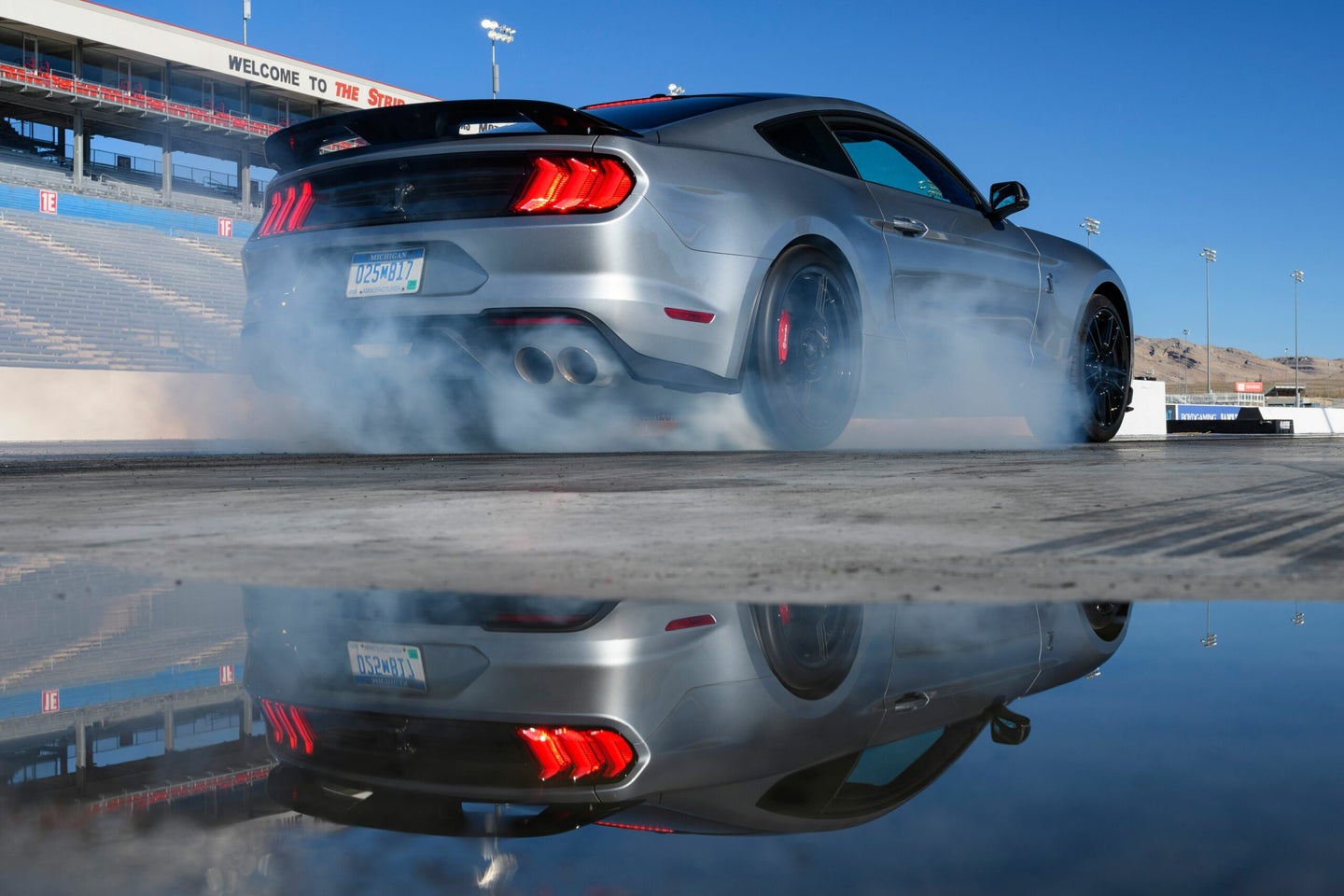 We managed quarter miles in the 11-seconds range during our time testing the car. Ford
SHARE

Braking into turn one at the end of the short pit straight on the 2.4-mile outside road course at Las Vegas Motor Speedway feels like it could be a close-your-eyes-and-hope proposition. At the wheel of the 2020 Mustang Shelby GT500, you’re stopping a 760-horsepower rocket that weighs 4,171 lbs., so slowing it reliably and turning in to the corner accurately seem like they could be exercises in wishful thinking.

Incredibly, lap after lap, turn after turn, the GT500 does exactly what it is supposed to do, despite the obvious challenges. Ford’s engineers created a machine capable of going 0-60 mph in 3.3 seconds and covering a quarter mile in just 10.7 seconds. Relying on the GT500’s launch control system, we scored back-to-back runs of 11.4 seconds at the Las Vegas Motor Speedway’s drag strip.

But the old GT500 was quick at the strip too. This new car seems best defined by what it isn’t, because it continually defies expectations based on the model’s history, its lineage, its power, and its mass.

This is possible partly because the GT500 defies a familiar Mustang convention: affordability. Mustangs are appreciated for their accessibility to everyday drivers, but our eye-searing Grabber Lime test car’s MSRP was an eye-watering $93,890. Add the optional $10,000 paint stripes (as most buyers apparently do) and the price tag easily clears the six-figure hurdle.

That’s a lot of money for a Mustang, but the GT500 packs a supercar-worthy roster of hardware to justify it. And fortunately, those go-fast goodies aren’t mere check-box window dressing. This Shelby is a perfectly cohesive whole rather than a collection of parts thanks to impressive attention to detail by the engineering team.

It is no surprise that the GT500 boasts big power: by now we’ve seen plenty of supercharged V8s before. The previous-generation GT500, the Dodge Hellcat and its Redeye and Demon variants, and the Chevrolet Corvette Z06 and ZR1. The GT500’s 5.2-liter V8’s 760 horsepower makes it Ford’s most powerful car ever, and the 625 lb.-ft of torque provides pickup truck-grade grunt.

This particular engine incorporates a couple noteworthy innovations. It is the first engine to employ Eaton’s new inverted 2.65-liter supercharger that places the heavy twin rotors at the bottom of the unit, with the lighter air-to-water heat exchanger for the intercooler at the top. This improves the packaging efficiency by squeezing the blower into the valley of the engine’s vee better and it lowers the engine’s center of gravity. This is especially beneficial in a car like the Shelby that stands relatively tall by performance car standards.

The engine’s wet-sump oil pan includes special features to provide the continuous supply of oil under high-g track conditions that usually require a racing-style dry sump system. An upside of the Mustang’s height is that there’s ample room beneath the engine for an enlarged oil pan, with side-saddle expansion tanks for added oil capacity. There is a maze of baffles in the bottom of the pan and hinged flaps control flow to the side tanks. All of this combines to prevent oil from gathering out of reach of the oil pump’s pickup, ensuring a steady supply of lubrication.

Power from the engine channels through a 7-speed Tremec TR-9070 dual-clutch transmission. Ford’s collaboration with Tremec in calibrating the transmission’s shift characteristics is evident in both the speed and the seamlessness of gearchanges, which were always perfectly timed in both street and track driving without the need to use the steering wheel-mounted shift paddles for manual control.

That includes making aggressive downshifts under hard braking into corners and timing upshifts exiting corners so they don’t upset the GT500’s balance while simultaneously accelerating and unwinding the steering wheel.

All of the underhood motive force generates a massive amount of heat, so Ford doubled the size of the air intake in the grille and added a hood exhaust vent that measures six square feet in area. The result is the ability to shed an incredible 230 kilowatts of waste heat, a capability developed using PowerFLOW computational fluid dynamics software from Dassault Systèmes.

This is especially important because while the engine is rated at “only” 760 net horsepower, because the supercharger takes 100 horsepower to spin at the engine’s redline speed, the V8 is actually producing 860 horsepower and the corresponding amount of waste heat.

Obviously, that heat comes from the combustion of gasoline, and the EPA rates the GT500 at 12 mpg in city driving and 18 mpg on the highway. But that is in placid driving that leaves most of the Shelby’s 760 horses in the corral. Unleash them on the track and the consumption turns nearly comically bad, because that power has to come from somewhere.

Ford engineers boasted that, despite its high-strung nature and rarefied performance, the GT500 endured all of the company’s regular durability testing. However, the Shelby couldn’t complete one test that involves 30 minutes of hard driving at full power. The reason: it emptied the 16-gallon gas tank in just 25 minutes.

During our track testing, we saw the low fuel warning light illuminate almost immediately after refueling, which indicated that the car’s computer predicted there was only 50 miles of driving range remaining even though the tank was full.

Even with the carefully designed airflow, there’s so much positive pressure under the hood that test drivers found it was lifting an inch during top speed testing at 180 mph, so the team added hood locking pins to supplement the regular latch.

The optional carbon package of aerodynamic add-ons was tested for effectiveness at the Windsheer rolling road wind tunnel in North Carolina, with the result of very slight front downforce of 2 lbs. at top speed and rear downforce of 550 lbs. with the optional taller wing. Grip added by this downforce was noticeable in the fast right-hand kink in the back straight at the Las Vegas Motor Speedway’s outside road course.

It is critical to be able to stop a car that is this heavy and capable of an electronically limited top speed of 180 mph, and we are pleased (and relieved) to report that the GT500 excels in this area. This is not something to be taken for granted, because cars like the Hellcat exhibit unnervingly long brake pedal travel and long stopping distances from high speeds and even a purebred supercar like the Lamborghini Aventador SVJ hunts around worryingly when braking at the end of a long straight.

In contrast, the GT500 is confidently stable under hard braking, making it easy to place the car precisely on the track and to blend from braking to turning into the curve without any of the oops-the-rear-is-trying-to-come-around drama that occurs in cars with less stability and less accurate control.

The front six-piston Brembo calipers grip enormous 420mm rotors. The system has 20 percent more swept area than the excellent stoppers on the GT350 and has 30 percent more thermal mass for absorbing kinetic energy as it turns to heat.

There is nothing particularly special about the rear brakes, but credit the BWI Magnaride magnetically adjustable active dampers for keeping the GT500 on an even keel, with little roll or pitch as the car rockets around the track. This lets the rear brakes do more of their share of the work because the car doesn’t tilt wildly forward even while braking hard enough to activate the anti-lock braking system. A cool detail on the rear brakes however is the use of a 3D-printed bracket for the wire running to the electric parking brake calipers that the Shelby uses.

Stopping grip for those brakes comes from the GT500’s 305/30R20 front and 315/30R20 rear Michelin Pilot Sport Cup 2 tires, which are mounted on 20×11-inch carbon fiber wheels. Lightweight carbon fiber wheels are normally touted for reducing unsprung mass and rotational inertia, both of which are typically high with fashionable large-diameter wheels.

But according to Jake Dingle, CEO of Carbon Revolution, the company that supplies the wheels, their real benefit to the GT500 is increased stiffness. Such large wheels are prone to significant deflection at the rim under the load of cornering in a heavy car with sticky tires, and that deflection saps the driver’s feel for accurate steering response. The stiffer carbon fiber wheels restore that feeling in the GT500, helping instill confidence in fast corners because the car responds as expected.

Another downside of fat, grippy tires is that they tend to follow the contours of the road surface rather than letting the car track effortlessly in a straight line. The tiresome inclination for the front tires to roam around is called “tramlining,” after a train that is locked onto its tracks, or “rut wander” because of the tendency of such cars to discover and follow subtle ruts pressed into asphalt by heavy trucks.

The Dodge Challenger Hellcat Widebody and Porsche 911 Turbo have both been notable offenders in this category, which could lead us to conclude that tramlining is an inescapable tradeoff that enthusiast drivers must accept for the traction provided by wide front tires.

But increasing the trail of the front wheel hub uprights, also known as spindles, kingpins or steering knuckles, by increasing the castor angle tilt from vertical increases the self-centering force of spinning wheels enough to overcome the problem of the wide tires wandering in the lane like a Beagle seeking a rabbit’s trail. Higher castor angles also increase the feedback provided to the driver through the steering wheel during cornering, which also benefits GT500 drivers’ confidence.

Attention to each of these kinds of details shows how engineers executed on their plan for the GT500 to achieve greatness, rather than simply relying on a few impressive performance specifications or name-dropping a couple respected component suppliers’ brands. The result is a car that feels like it defies known laws of physics as it rips around the racetrack like a vehicle that weighs much less than it does. Just remember to keep an eye on the gas gauge during track driving.