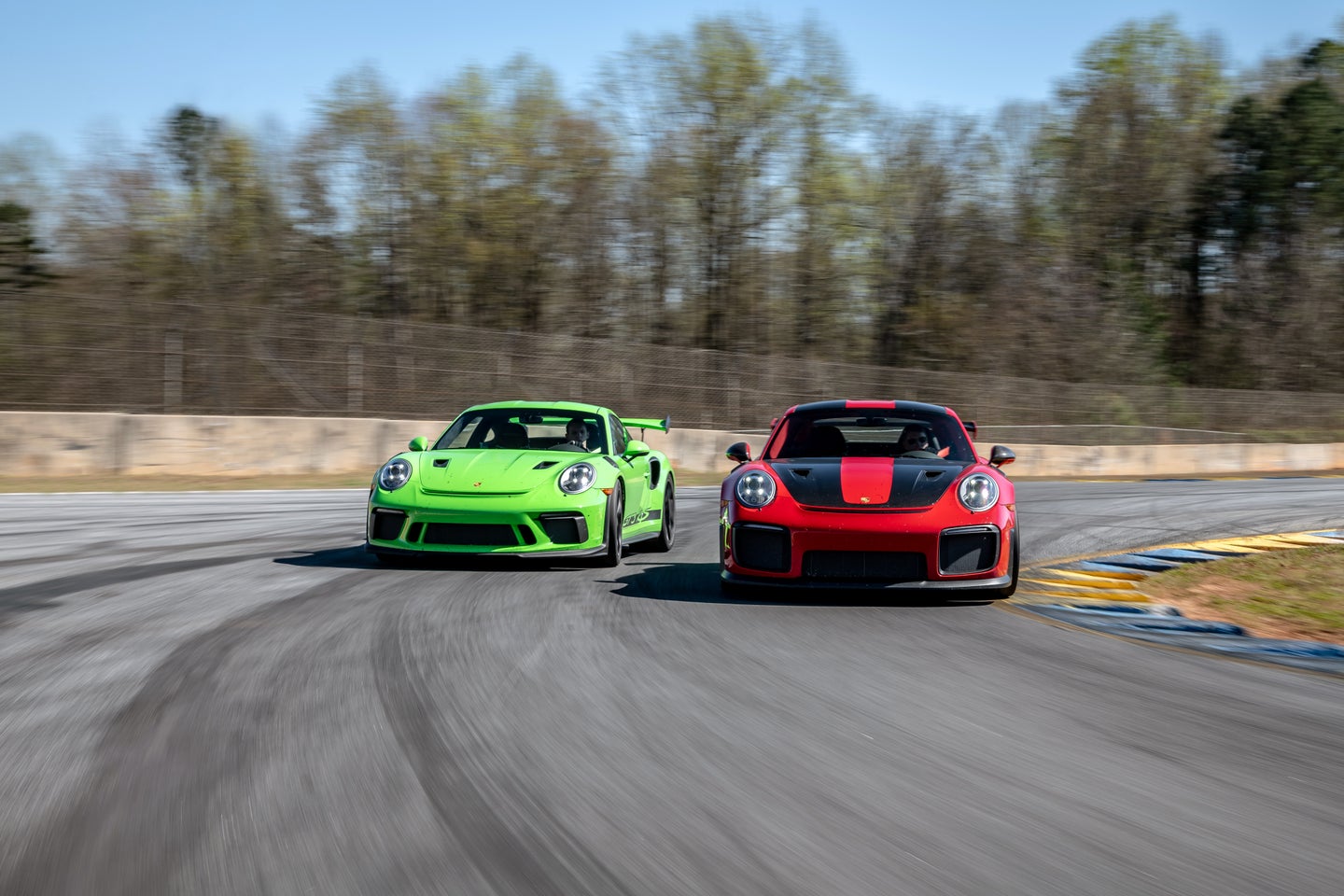 The nearly indistinguishable designations of these cars—one has a “2” in the name, the other, a “3”—and their doppelganger appearance will lead fans to wonder what exactly the difference is between them. Our efforts to answer that question while driving them on the track identified one of the cars (the GT2) as almost incomprehensibly fast on the straights, while the other rips around corners with confidence.

Mat the accelerator and time slows down in the 700-horsepower GT2 RS. Road America’s 4,400-foot straightaway at its track in Wisconsin shrinks at your command. Plot a tangent into the ensuing turn in the GT3 RS, and the car bends into an obedient arc at improbable speed. Hyperspace jumps or precision turns? It is a tough call.

Porsche’s iconic 911 sports car debuted in 1964 and has since evolved into a sometimes bewildering family of variants that include a coupe, targa, and convertible, as well as options like rear-wheel drive, all-wheel drive, and more.

The high-performance pinnacles of this family are the track-centric 911 GT2 RS and the GT3 RS. But the basic design of the 911 is sublime—a platform that is capable of impressive acrobatics. It’s considered to be an accessible high-performance sports car, so while the price does start at $91,100, that is far less expensive than other European super sports cars.

Climbing the 911 hierarchy to the very top, where the 911 GT2 RS and GT3 RS reside, means discovering a vehicle made of copious amounts of carbon fiber and magnesium instead of heavier material, and tires and brakes that are 100-percent ready to withstand the most furious track attack.

These substitutions leave the 911’s core intact, but they explain why the brilliant Guards Red GT2 RS’s price reached $328,880, while the gorgeous Lizard Green GT3 RS I tested has a bottom line on its window sticker of $209,320.

Both cars are equipped with generous amounts of carbon-fiber aerodynamic aids that give them the look of race cars that have been stripped of their numbers. There is a front splitter, fender flares with air extractor vents, side skirts, a diffuser, and an enormous rear wing.

Beneath the skin, on the receiving end of both cars’ various air intake scoops and vents, are an array of heat exchangers tasked with shedding the warmth generated in accelerating to, and decelerating from, the GT2 RS’s top speed of 211. Comparatively, the GT3 RS reaches a tortoise-like 198 mph.

Both cars carry enlarged 23.7-gallon extended-range fuel tanks to permit longer track runs at the copious rate of consumption that occurs at such speeds, and they blast spent exhaust gas out through lightweight titanium mufflers that save 15 pounds of weight. Porsche even installs smartphone-style Gorilla Glass in the RS’s back window and rear side windows to save weight, compared to the heft of regular glass.

They both hold the RS designation, which indicates that they are a step beyond regular GT2 and GT3 models, and carry still more track-centric hardware. The differences can be subtle: In the case of the GT3 RS, it also means that the bodywork is 1.1 inches wider than that of the regular GT3.

The RS enjoys wider wheels and tires than a regular GT3 too, putting a larger contact patch onto the track for maximum grip. The rubber suspension bushings that filter the bumps of the real world are eliminated, leaving only metal bearings that convey instant and accurate feedback on the suspension’s activity. That’s a godsend on the race track. Whether you can actually live with it on the road probably depends on the street’s condition and your personal ability to tolerate discomfort.

Behind the wheel, both RS cars feature warm-to-the-touch carbon-fiber steering-wheel-mounted shift paddles in place of the regular GT2/GT3 cool-to-the-touch aluminum paddles. And carbon fiber racing seats also replace the regular Porsche sport seats. Naturally, these seats slide fore and aft to accommodate drivers of varying heights, but their one-piece design does not permit any adjustment to the seat back angle.

Those shift paddles control the action of the seven-speed dual-clutch Porsche Doppelkupplung (PDK) transmission used in both cars. Porsche pioneered development of dual-clutch transmission technology, and its mastery of the design is evident here, as the transmission works intuitively in automatic mode and clicks off seamless shifts with no evident interruption in power delivery when the driver prefers to pull the shift paddles manually.

It is equally proficient on downshifts, cascading down through the gears to help slow the car under heavy braking into Road America’s Canada Corner. I’ve never known the reason for that turn’s name, but I’ve always imagined it as a warning: Mess up this corner and your car will land in Canada.

Neither 911 came close to that fate, as the brakes, steering, throttle, and transmission conspired to hustle both the GT2 and GT3 through the Canada Corner with confidence and abundant speed.

They only look the same

But as similar as the cars seem to be, and as many components as they share, they are completely different to drive.

The GT2 RS is propelled by a twin-turbocharged 700-horsepower, 553 pound-feet, 3.8-liter version of Porsche’s signature flat six-cylinder engine. Maybe the neatest power-boosting feature is a 1.3-gallon tank of distilled water that sprays cooling mist onto its twin intercoolers when the intake temperature tops 122 degrees F, revs exceed 3,000 rpm, and the driver applies more than 90 percent throttle. This yields a power-enhancing 68-degree reduction in the temperature of air going into the engine. There’s a warning indicator when the total-loss reservoir is running low, letting drivers know when to pop the front trunk lid and top off the water in the tank.

For my laps in the GT2 RS, I was following pro racer David Donohue, who was piloting a 911 Turbo S to show the way and keep an eye on me. The 911 Turbo S is a 540-horsepower, 198-mph beast and it was being driven by a top sports car driver.

Nevertheless, there was no moment following him when I couldn’t command the GT2 RS to simply travel through hyperspace from wherever it was on the track to the Turbo’s rear bumper by simply flexing my right ankle. Its speed is absolutely astonishing.

The GT3 RS is a different beast. It is powered by a naturally-aspirated 520-horsepower, 346 pound-feet 4.0-liter flat six-cylinder. The engine spins to an impressive 9,000 rpm, which creates an otherworldly howl through the intake system, unimpeded by the obstruction of spinning turbines as in the GT2. This shriek provides a soundtrack that seems truly appropriate for the GT3 RS’s thrills.

However, where the GT2’s output seems incredible, the GT3’s seems ample. At no time does the GT3 RS feel slow, not even in direct comparison to the GT2 RS. It simply lacks the ability to warp space and pop out of a wormhole at the end of the front straight the way the GT2 RS does.

For that drive I was following retired sports car great and Le Mans-winner Hurley Haywood in an identical car. The only difference was that my GT3 RS, like the GT2 RS I drove, was fitted with the newest, highest-performance Michelin Pilot Sport Cup 2 R tires, instead of the previously available non-R Pilot Sport Cup 2s, which were on Haywood’s car.

These tires turned the already precise GT3 RS into an otherworldly cornering machine. In heavily-loaded turns like the Canada Corner, my GT3 RS unerringly tracked the scent of the car ahead. Meanwhile, the championship-winning driver ahead was fighting to balance his car’s slide as the last-generation tires simply couldn’t match Michelin’s newest rubber for grip and stability.

It was an amazing display, and one that underscored the GT3 RS’s handling prowess, which feels more agile than that of the GT2 RS, even on the same tires. The less-powerful car seems to turn in to corners more crisply and hold its line more accurately than the one that can summon crazy amount of speed on the next straight.

Forced to choose, I find myself preferring the precision of the GT3 RS over the stupendous speed of the GT2 RS. But in reality, it’s a question that has no wrong answer—as long as you’re cool with spending over $200,000.