Farmers Eye Drones For The Future

Drone, drone on the range 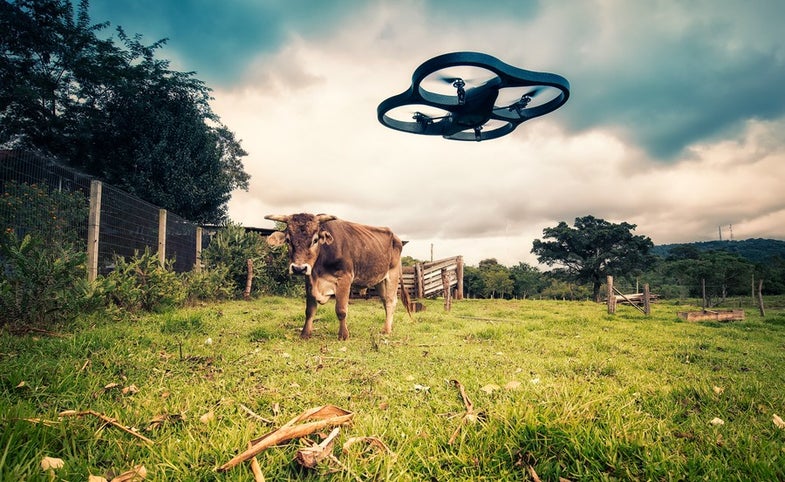 Even though humans have been farming for thousands of years, there’s always a new trick to learn or a new technology to try. In modern times, these tricks often come attached to small flying aircraft, a fact evidenced by the continued and growing presence of drones at agricultural expositions. Successful drone use might lead to better yields in the future, with an emphasis on the future: while the FAA just proposed new drone rules, it’ll likely be 18 months to two years before they come into effect. That’s 18 months until farmers can fly drones in a legally unambiguous way.

Here’s what drones promise: cheap aerial photography, with regular and infrared cameras, combined with programs that stitch together and analyze the photos, to give farmers information that was previously unattainable or too costly. In 2013, a vineyard in California used drone photography to find a section of vines that was ripening sooner than expected, prompting an earlier harvest of that area. Last year, the U.S. Department of Agriculture looked into acquiring and testing a drone for farming purposes.

Drones can do more for farming than just photographing crops. Sugar alternative giant Stevia considered flying drones with lights over its crops at night to spur extra growth. And a student contest in Maryland last summer considered drone designs to protect corn from insect predators, including a design that landed on corn stalks and picked grubs off of it with mechanical arms.

The FAA’s proposed rules offer some promise for drone farmhands, and some limitations. As proposed, the rules require pilots to fly only within their line of sight, which limits how far drones can travel. A restriction on night flying would prevent anyone flying light-shining drones over crops after dark. Limitations on autonomy or pre-programmed flights also undermine using drones in a labor-saving way. Until the official rules come out, companies that want to test their crop-scanning drones either have to apply for a specific exemption from the FAA, pose as hobbyists, or operate in a legal gray area.

In the millennia-long history of farming, two years isn’t terribly long to wait. But in the fast-moving world of flying technology, waiting for the new FAA rules can feel like watching grass grow.