Look at this weird plane 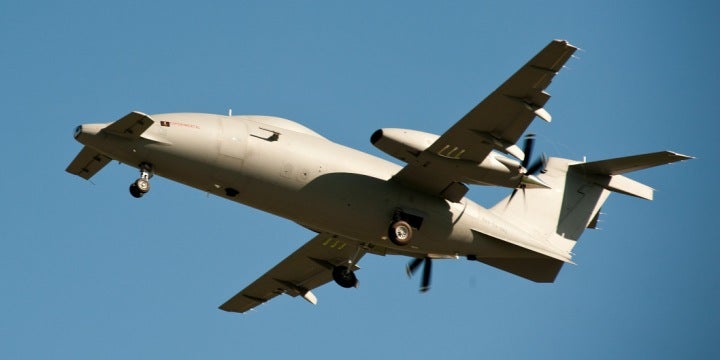 The laws of aerodynamics require a certain smoothness of form, a kind of mandatory design elegance. The Piaggio Aerospace Hammerhead stands in contrast to this romantic notion of flight, with canards and pusher propellers combining into an airplane uglier than the sum of its parts. And yet, as Piaggio announced at the International Defence Exposition held in Abu Dhabi, the Hammerhead flies!

The successful first flight of the Hammerhead prototype took place this past December from an Italian Air Force base and including flying over part of the Mediterranean Sea. The airplane is designed as a Medium Altitude Long Endurance (MALE) drone, which means it will in theory reach altitudes up to 45,000 feet and fly for as long as 16 hours continuously. The body is similar in profile to the Piaggio’s P.180 Avanti, a manned luxury aircraft that’s also getting a crewed military adaptation.

What’s unique about the Hammerhead is the range of speeds at which it will fly. To work as a surveillance drone, it will cruise slowly, at speeds of around 155 mph. It doesn’t need to fly that slow all the time, however, and if the Hammerhead works as designed it will fly at speeds over 500mph to get where it needs to be. And that is beautiful.