A Map Of Where Drones Are Allowed In The U.S. 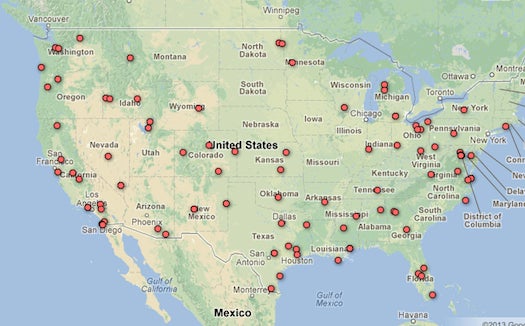 If you want to fly more than a hobbyist’s drone in the United States, you have to get permission from the Federal Aviation Administration. We’ve know for a while about some drones–the ones keeping an eye on the U.S.-Mexico border, for example–but this list of applications through October 2012, obtained and mapped by the Electronic Frontier Foundation, is the most up-to-date look at domestic-drone permissions we’ve got.

The list is broken down by “entities,” places like colleges or local sheriff’s offices that have applied to the FAA for a license to use drones. The 81 entities on the list, 20 more than on the first list we saw from the EFF, are mixed: a lot of drones are going to government agencies like police departments, a lot to universities and colleges, others to drone manufacturers, and one to an Indian tribal agency. For some reason, Ohio seems to have been granted a lot of permits in this round.

On this interactive map, you can find out what type of drones many applicants were authorized to use: We know the Nellis Air Force base in Nevada has a license to use an MQ-1 Predator drone, and the University of Colorado, Boulder, has a license to use a NexSTAR miniature UAS drone to do experiments into weather and wireless networks. But we don’t know what everyone’s allowed to use. The U.S. Army, for instance, has, permission to fly drones in the “general location” of the Pentagon. Type of drone? “Unknown.”

What this list also doesn’t tell us is how many drones are flying around or how many drones each entity is flying. Like, does the U.S. Army have some gigantic fleet of drones at the Pentagon? This doesn’t say.

It’s enough to make you downright paranoid, but the “stated objectives” included for some of the license applicants might ease your mind a little. Cornell University once used a home-brew drone for a science experiment, while California Fire Services formerly had permission to use drones for fighting wildfires.

But yeah, that whole Pentagon thing.