Why Don’t We Have More Drones Monitoring Wildfires?

Infrared eyes and remote pilots have a lot to offer forest firefighters. 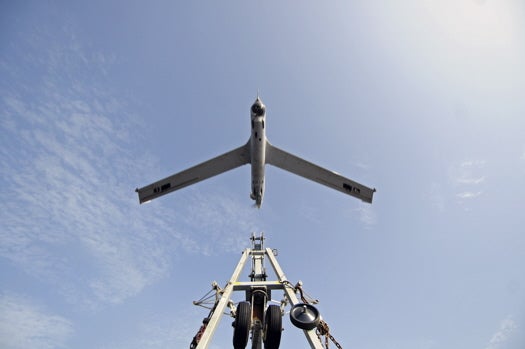 Remote-controlled drones are much better at flying through smoke than human pilots: their infrared eyes can track the edge of a fire even through the thickest air. When the Forest Service asked the Federal Aviation Administration for permission to use unmanned aerial systems to monitor wildfires, the FAA said no, but offered an exemption: the Forest Service could fly the drone, so long as an operator on board another aircraft could see it at all times.

That undermines the whole reason for using a drone, of course, but such is the curious state of drone regulation today. In 2015 the FAA will pass new rules opening airspace to far more unmanned vehicles, and should have guidelines in place for how firefighters and law enforcement officials use drones.

Until then, organizations have to get authorization from the FAA to fly drones domestically. There’s a growing list (and accompanying map) of groups that have FAA permission to fly drones. Groups not on that list have to request permission from the FAA to operate drones on a case by case basis, a process that can take days and has limited applicability in emergency situations. And even if an organization like the Forest Service gets timely permission, that permission often comes with the stipulation that drones be followed with a manned chase plane. Flying through smoke is a great task for a drone, but requiring another plane to follow along behind it defeats the whole point of using an unmanned plane in the first place.

Flying tracking the edges of forest fires should be one of the least controversial uses of drones ever. Congress has to approve of the FAA rules before they can take effect in 2015. It remains to be seen whether Congress will respect the difference between drones that save lives and drones that violate privacy.