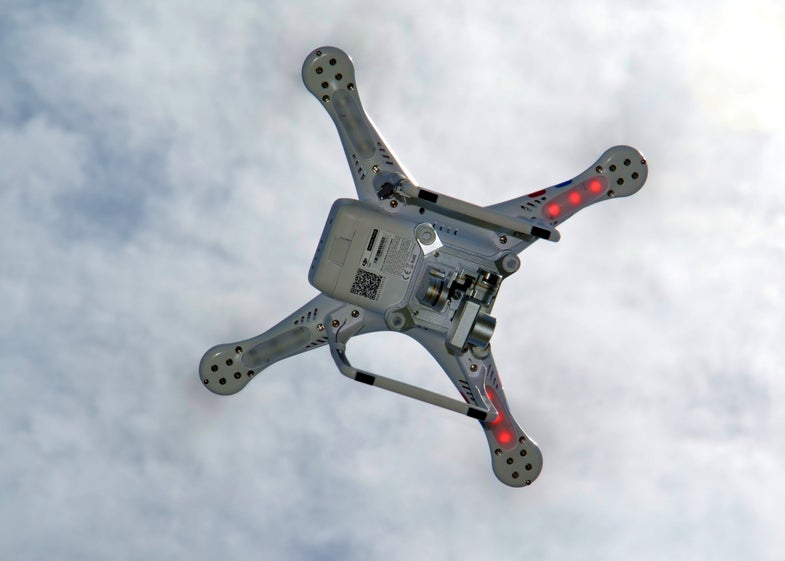 Acting as cheap flying cameras, drones already raise a lot of questions about privacy. But it’s not just aerial photography people should worry about with drones. Earlier this month, AdNear, a Singaporean marketing company, flew drones with sensors that could detect cell phone signal strength and WiFi over part of Los Angeles. The drones identified and located people by the devices in their pockets, so that businesses could send highly-specific ads to their smartphones. The company praised this cyberpunk dystopian idea in a blog post, saying:

AdNear’s business model is built around “location-based advertising,” where people walking about their daily lives are identified by their smartphone signals and then sent ads or promotions for nearby companies. This isn’t a location-based app where people check in and see recommendations for what’s nearby, but instead passive potential customers are identified by their mobile devices.

Think of it like the cookies from third party advertisers that websites store on users’ browsers while they’re visiting the site. With cookies, a file placed by an advertiser picks up that a person searched for shoes on Amazon; then that cookie might advertise shoes to them on the next page they visit. AdNear’s drones act like these information-gathering cookies, just outside of your computer. They scan cell tower signals and WiFi signals, so when a cellphone walks by a shoe store, an athletic shoe company can advertise to that customer on their mobile device.

How does it find those signals? Latanya Sweeney, formerly the Federal Trade Comission’s Chief Technologist, explains in a blog post:

An AdNear’s marketing campaign for Adidas in India wanted to find customers who were near an Adidas store, visited coffee shops or malls, and also visited gyms. AdNear was able to find potential customers who met all those traits just by scanning for WiFi and cellphone signals, and then made it so ads showed up on their phones or tablets when they were within about two miles of an Adidas store. Location information isn’t exactly private, personal data, but a company doesn’t need many location data points to identify an individual.

Other than the legally unclear use of drones for a commercial purpose, there isn’t anything explicitly illegal about scanning people’s cell phones and WiFi, and then using that information to send them ads. But just typing that sentence makes me want to take a shower.