Why astronomers are blasting Earth’s location to potential intelligent aliens

Despite warnings from scientists like Stephen Hawking, some astronomers are sending informative signals deep into space. 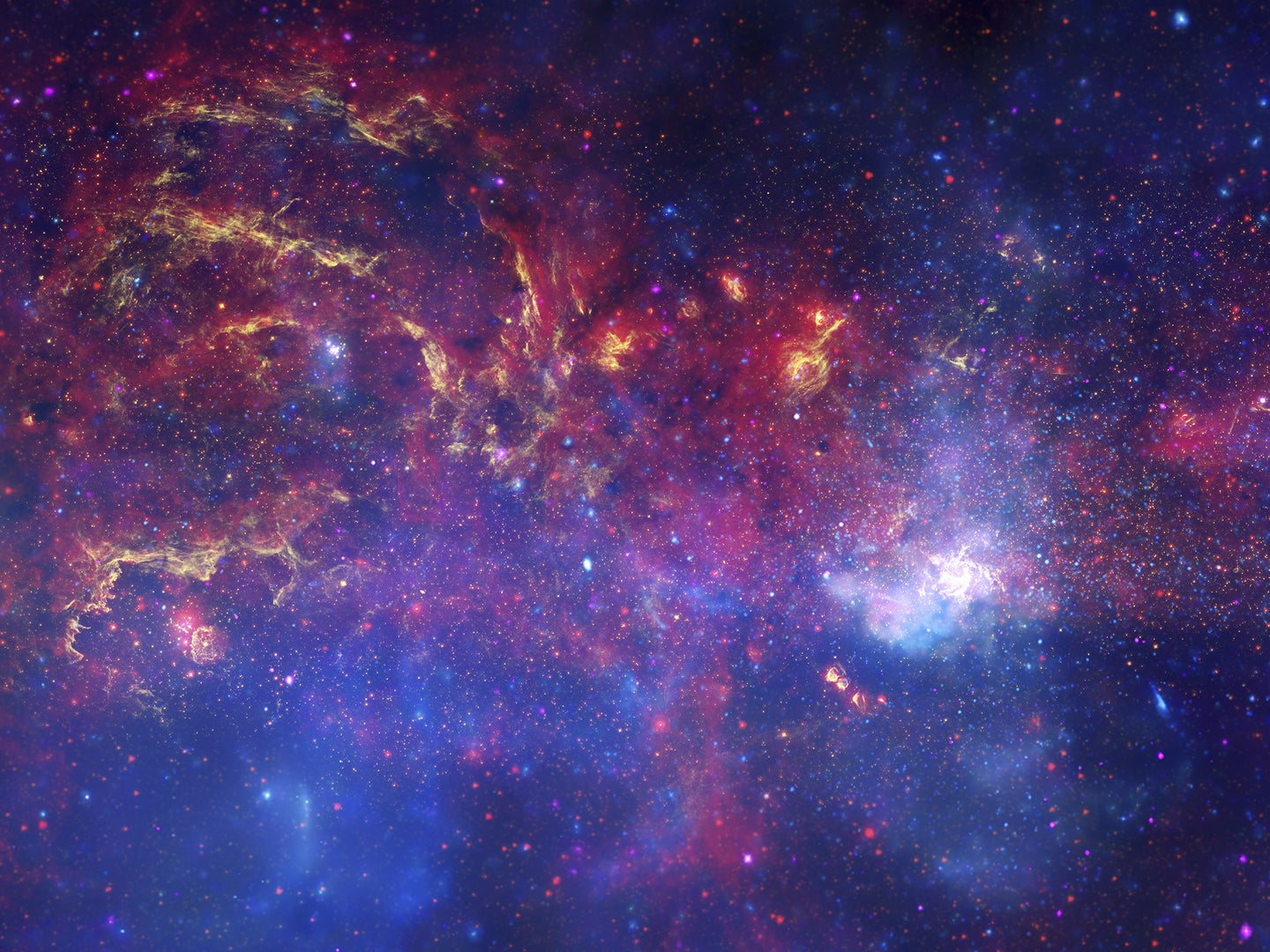 The center of the Milky Way galaxy may be home to intelligent life, but some researchers think contacting aliens is a bad idea. NASA/JPL-Caltech/ESA/CXC/STScI
SHARE

If a person is lost in the wilderness, they have two options. They can search for civilization, or they could make themselves easy to spot by building a fire or writing HELP in big letters. For scientists interested in the question of whether intelligent aliens exist, the options are much the same.

For over 70 years, astronomers have been scanning for radio or optical signals from other civilizations in the search for extraterrestrial intelligence, called SETI. Most scientists are confident that life exists on many of the 300 million potentially habitable worlds in the Milky Way galaxy. Astronomers also think there is a decent chance some life forms have developed intelligence and technology. But no signals from another civilization have ever been detected, a mystery that is called “The Great Silence.”

While SETI has long been a part of mainstream science, METI, or messaging extraterrestrial intelligence, has been less common.

I’m a professor of astronomy who has written extensively about the search for life in the universe. I also serve on the advisory council for a nonprofit research organization that’s designing messages to send to extraterrestrial civilizations.

In the coming months, two teams of astronomers are going to send messages into space in an attempt to communicate with any intelligent aliens who may be out there listening.

These efforts are like building a big bonfire in the woods and hoping someone finds you. But some people question whether it is wise to do this at all.

The history of METI

Early attempts to contact life off Earth were quixotic messages in a bottle.

In 1972, NASA launched the Pioneer 10 spacecraft toward Jupiter carrying a plaque with a line drawing of a man and a woman and symbols to show where the craft originated. In 1977, NASA followed this up with the famous Golden Record attached to the Voyager 1 spacecraft.

These spacecraft—as well as their twins, Pioneer 11 and Voyager 2—have now all left the solar system. But in the immensity of space, the odds that these or any other physical objects will be found are fantastically minuscule.

Electromagnetic radiation is a much more effective beacon.

Astronomers beamed the first radio message designed for alien ears from the Arecibo Observatory in Puerto Rico in 1974. The series of 1s and 0s was designed to convey simple information about humanity and biology and was sent toward the globular cluster M13. Since M13 is 25,000 light-years away, you shouldn’t hold your breath for a reply.

In addition to these purposeful attempts at sending a message to aliens, wayward signals from television and radio broadcasts have been leaking into space for nearly a century. This ever-expanding bubble of earthly babble has already reached millions of stars. But there is a big difference between a focused blast of radio waves from a giant telescope and diffuse leakage—the weak signal from a show like “I Love Lucy” fades below the hum of radiation left over from the Big Bang soon after it leaves the solar system.

Nearly half a century after the Arecibo message, two international teams of astronomers are planning new attempts at alien communication. One is using a giant new radio telescope, and the other is choosing a compelling new target.

One of these new messages will be sent from the world’s largest radio telescope, in China, sometime in 2023. The telescope, with a 1,640-foot (500-meter) diameter, will beam a series of radio pulses over a broad swath of sky. These on-off pulses are like the 1s and 0s of digital information.

The message is called “The Beacon in the Galaxy” and includes prime numbers and mathematical operators, the biochemistry of life, human forms, the Earth’s location and a time stamp. The team is sending the message toward a group of millions of stars near the center of the Milky Way galaxy, about 10,000 to 20,000 light-years from Earth. While this maximizes the pool of potential aliens, it means it will be tens of thousands of years before Earth may get a reply.

The other attempt is targeting only a single star, but with the potential for a much quicker reply. On Oct. 4, 2022, a team from the Goonhilly Satellite Earth Station in England will beam a message toward the star TRAPPIST-1. This star has seven planets, three of which are Earth-like worlds in the so-called “Goldilocks zone”—meaning they could be home to liquid and potentially life, too. TRAPPIST-1 is just 39 light-years away, so it could take as few as 78 years for intelligent life to receive the message and Earth to get the reply.

The prospect of alien contact is ripe with ethical questions, and METI is no exception.

The first is: Who speaks for Earth? In the absence of any international consultation with the public, decisions about what message to send and where to send it are in the hands of a small group of interested scientists.

But there is also a much deeper question. If you are lost in the woods, getting found is obviously a good thing. When it comes to whether humanity should be broadcasting a message to aliens, the answer is much less clear-cut.

Before he died, iconic physicist Stephen Hawking was outspoken about the danger of contacting aliens with superior technology. He argued that they could be malign and if given Earth’s location, might destroy humanity. Others see no extra risk, since a truly advanced civilization would already know of our existence. And there is interest. Russian-Israeli billionaire Yuri Milner has offered $1 million for the best design of a new message and an effective way to transmit it.

To date, no international regulations govern METI, so the experiments will continue, despite concerns.

For now, intelligent aliens remain in the realm of science fiction. Books like “The Three-Body Problem” by Cixin Liu offer somber and thought-provoking perspectives on what the success of METI efforts might look like. It doesn’t end well for humanity in the books. If humans ever do make contact in real life, I hope the aliens come in peace.