Should pets wear Halloween costumes? Your furry friend can help you decide.

Joan of Bark and George Washington Catver might not feel as festive on the haunted holiday. 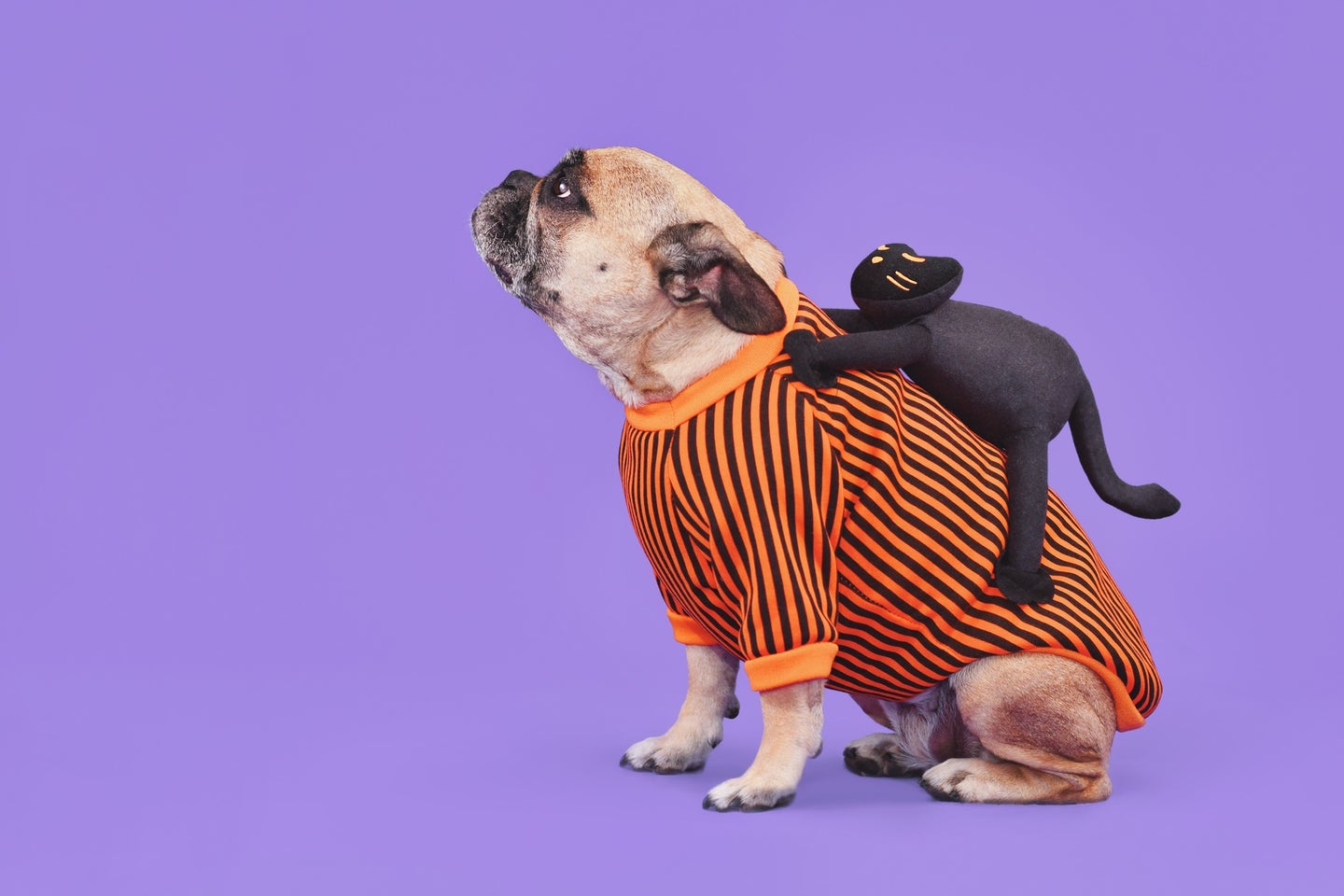 This Frenchie would rather spend Halloween chewing on a Kong toy on the couch. Deposit Photos
SHARE

Halloween means ghosts, dog-lins, skeletons, meow-nsters, and hungry bats. But for your animals at home, it’s like any other day—until you stuff them into a ridiculous costume.

While there’s a lot to love about twinning Siamese cats and wiener dogs slathered in (fake) ketchup, mustard, and sauerkraut, your pet will communicate if they’re feeling festive or not. Some furry friends might enjoy the experience of dressing up; others might find it uncomfortable or even frightening. It all comes down to their breed, personality, and level of tolerance, says Amy Pike, a veterinarian at the Animal Behavior Wellness Center in Virginia.

Take dogs, for instance. Breeds that are used to being groomed and handled a lot, like poodles and Shih Tzus, might not mind voguing in a sweater or a pair of booties for a night. Socialization is key as well. If your puppy was exposed to enough objects and settings before four months of age, they should be more receptive to a costume and a few hours of trick-or-treating. “Just like people, dogs have a spectrum of tolerance,” Pike says. She shares that her old canine would prance around in a taco outfit on Halloween, but the current one won’t even consent to little angel wings.

[Related on PopSci+: Can dogs be introverts?]

Cats, on the other hand, can be more squeamish to the tradition. “They don’t typically wear collars or harnesses, and might be more challenging to [put a costume on],” Pike explains. “But again, there’s a spectrum.” Felines go through a much quicker socialization stage that ends at around 9 weeks of age. If an owner gets them used to accessories early on, they’ll probably be better at going with the flow. (Pike points to MoShow, the furry rapper, as an example.)

With both types of animals, Pike says it’s important to look and listen for distress. Dogs especially use body language and facial expressions to tell you what they want. If a canine is non-verbal, pinning their ears back, tucking their tail down, or wrinkling their brow, those are signs that they want out. Cats, which are not so bent on appeasing humans, will outright refuse to put on your threads.

The type of costume matters as well. Think of what your pet might feel good in, not just what is trendy, witty, or funny. The material should provide the right amount of coverage so that the animal is not too warm or too cool throughout the evening. Styles should not be restrictive: Your cat or dog needs to have a full range of motion for all four limbs. Finally, if you’re venturing outside, make sure you’re still able to attach a leash to their body or neck.

[Related: Your cat probably knows when you’re talking to it]

And remember, if you’re spooked by the sights and sounds around your neighborhood or at a party, a dog or cat probably would be, too. Loud, motion-sensor decorations can be triggering, so try to avoid them along your route. If your pet doesn’t interact well with kids, don’t take them around during peak trick-or-treating hours. Make sure to have some animal-grade goodies on hand: Positive reinforcement can help your buddy get adjusted to new places, stimuli, and experiences. A puppy will have more fun in a tutu if you reward them with scraps of roasted chicken.

In the end, Pike says to ask yourself, “who am I doing this for?” It’s okay to celebrate Halloween with your furballs, or even use them for entertainment if it’s harmless. Just know that pets aren’t people, so they might not find the holiday as bewitching as you do.