A ‘monsoon on steroids’ has submerged a third of Pakistan

More than 1,000 people have died in devastating flooding. 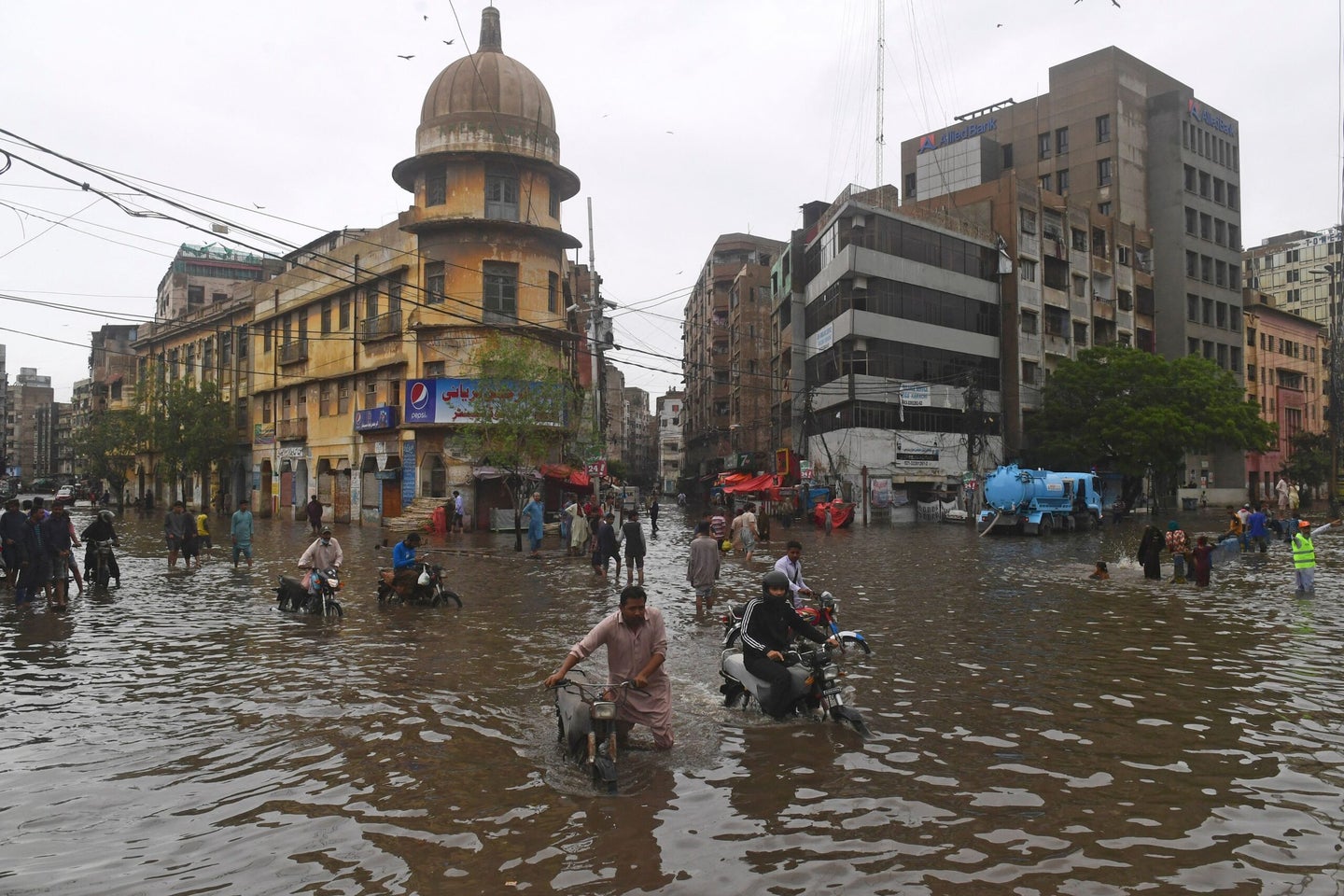 Monsoons flooded the streets of Karachi in July. Photo by ASIF HASSAN/AFP via Getty Images
SHARE

As countries around the world experience serious drought conditions, Pakistan is facing unprecedented flooding. Floodwaters have submerged roughly one-third of the country, an area about the size of Colorado, underwater. Following eight consecutive weeks of rainfall since June, at least 1,136 people have died according to Pakistan’s National Disaster Management Authority. The government estimates that the floods have affected more than 33 million people, over 15 percent of its population of 220 million, and has declared a national emergency and appealed for international aid.

The downpours are sending flooding down from northern mountains and melting the country’s numerous glaciers, destroying homes and villages, and wiping away crops. In an interview with Sky News, Pakistan’s climate change minister Sherry Imran called the flooding “apocalyptic,” noting on Twitter that one town in Sindh saw 67 inches of rain in one day.

This disaster par with the devastating 2010 floods, which killed more than 2,000 and is deadliest flooding in Pakistan’s history. The first aid flights arrived from Turkey and the United Arab Emirates on Sunday, with tents, food, and other necessities. Qatar Red Crescent has also pledged emergency aid to Pakistan.

Today, the United Nations issued a flash appeal to raise $160 million to help the country recover and the World Food Programme (WFP) is working to dispatch aid to nearly half a million people in the provinces of Balochistan and Sindh. Mountainous regions in Khyber Pakhtunkhwa have also been badly hit and thousands of people in the northern Swat Valley have been ordered to evacuate. According to the WFP, access to the affected regions remains a critical issue, as more than 100 bridges and some 1,800 miles of roads have been damaged or destroyed, nearly 800,000 farm animals have died, and two million acres of crops and orchards have been deluged.

“Pakistan is awash in suffering,” said UN Secretary General António Guterres in a video message for the launch of the appeal. “The Pakistani people are facing a monsoon on steroids—the relentless impact of epochal levels of rain and flooding.”

The government estimates that the damage from the floods already cost more than $10 billion, adding that the world had an obligation to help the South Asian country cope with the effects of man-made climate change. Despite producing less than 1 percent of global greenhouse gas emissions, Pakistan consistently ranks in the top 10 countries most vulnerable to the effects of climate change.

[Related: What a century of rising seas can tell us about the next 30 years.]

According to weather experts, the increasing number of extreme weather events (both too much water and not enough of it) is due to Earth’s rising temperatures. Warmer temperatures mean more water in the air, since for every degree of increased temperature, the air can hold about 4 percent more water.

Secretary General Guterres referred to South Asia as a “climate crisis hotspot,” where people are 15 times more likely to die from climate impacts. “Let’s stop sleepwalking towards the destruction of our planet by climate change. Today, it’s Pakistan. Tomorrow, it could be your country.”