Climate experts explain why these flooding disasters are expected to be more common as the planet continues to heat up. 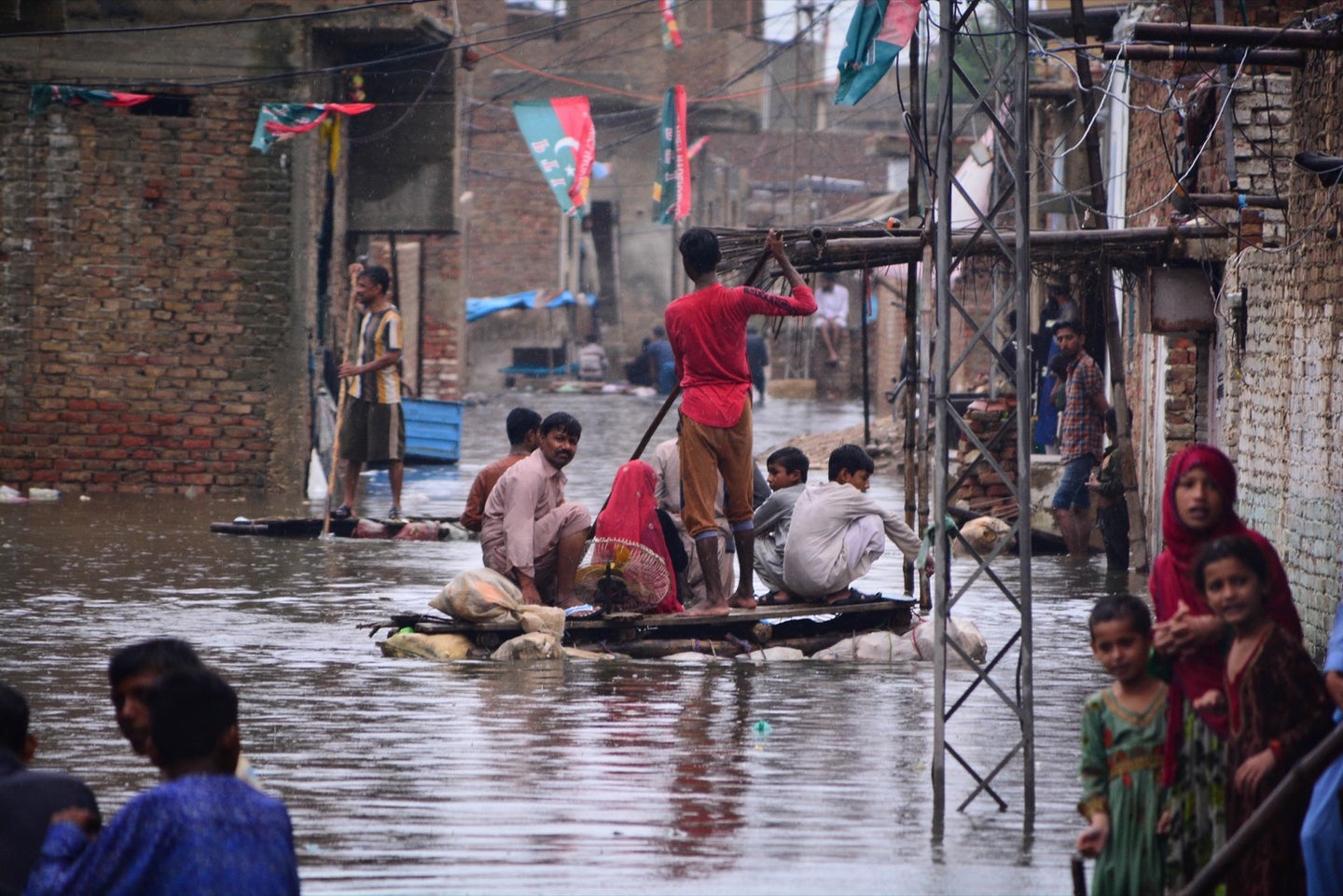 Residents use a raft to move along a waterlogged street in a residential area after a heavy monsoon rainfall in Hyderabad City on August 19, 2022. Akram Shahid/AFP via Getty Images)
SHARE

One-third of Pakistan is now underwater. The country is currently dealing with one of the worst floods in a decade, with record-breaking rains leaving 1,325 people dead and more than 33 million without homes. Climate change experts say that these extreme weather conditions did not come out of the blue, suggesting that global warming is likely the cause behind the flooding and will likely instigate future flooding events.

While studies have yet to confirm the official cause behind the disastrous waters in Pakistan, the flood “has all the signs of a climate change-enhancing event,” says Benjamin Zaitchik, a climate change scientist at Johns Hopkins University. There are several leads that researchers, such as Zaitchik, are following to understand why the relentless monsoon occurred and what weather conditions should be monitored to prepare for events in the future.

One of the most likely scenarios involves greenhouse gases. With greenhouse gases warming the air, Zaitchik explains that extreme precipitation rates are expected to increase in many regions. This is because warm air holds more water vapor than cold air. As you warm air, it transports more moisture, creating the right conditions for extreme rainfall.

Another potential cause for the intense flooding in Pakistan could be related to meandering jet streams. Jet streams are fast flowing, strong winds five to seven miles above the atmosphere. The air currents travel across the globe but there are times when they “wiggle around” slightly, explains Zaitchik, causing cold air to come in from the north or warm air to come from the south.

[Related: A ‘monsoon on steroids’ has submerged a third of Pakistan]

Jet streams blow from west to east with the flow shifting from north and south. “It’s the difference between the really warm air at the equator and the cold air at the pole that keeps the jet streams in line as they whip around the planet,” he says. The bigger the temperature difference in the air, the better the balance at keeping the jet stream. During the winter when the temperature gap is at an all-time high, jet streams travel with strong and fast cold winds to the south. But in the summer, the warm air drives jet streams to travel slowly up north.

However, under global warming, the jet streams are flowing more often in a meandering pattern: some currents are dipping and rising, even splitting away more often than they should. Zaitchik explains that when you warm the planet with greenhouse gases, the difference in cold air from the poles and warm air from the equator gets smaller. As jet streams wiggle around more often, Zaitchik says it can create situations called blocking patterns, where a jet stream blocks the air and creates a particular high or low pressure current that stays longer over an area. This can  cause prolonged weather patterns than usual, like a heatwave.

Heat waves on land could also be a potential culprit. Zaitchik explains that as warm air rises, it creates a low-pressure system over regions like in Pakistan, which already experience hot and dry temperatures. The low pressure sucks the air coming in and removes moisture from the ocean. Martin Stute, a hydrologist and environmental science professor at Barnard College, says that the world is currently in a La Niña period that tends to make Pakistan and other Asian countries wetter in the summer. Warm moisture taken from the ocean feeds into storms, intensifying winds and rainfall. The “heat wave leads to dry and hot conditions that bring more wet fuel, to power the event,” explains Zaitchik.

Another type of wet fuel for extreme flooding is the melting of glaciers in Pakistan. The country has over 7,200 glaciers, one of the largest number of glaciers outside the North and South Poles. With glaciers rapidly melting from constant high temperatures, Stute says they are contributing to higher stream flow. The runoff could have then fed lakes and rivers that overflowed into nearby towns and villages.

Although Zaitchik blames particularly rich first-world countries, such as the US and China, with large carbon footprints for the greenhouse gas emissions charging these natural disasters, the rest of the world often has to face the consequences. ​​Pakistan’s carbon use has grown in the past few years but its footprint is much smaller than developed countries. For example, Pakistan has a 0.67 percent carbon emission rate while the US is nearly 14 percent. ”We’re seeing some of the poor countries with relatively low per capita carbon emissions, but also low infrastructure and climate resilience, bearing the brunt of the impacts,” says Zaitchik.

Pakistan’s flooding is devastating, but expected. As a developing country, Pakistan has made strides in exporting textile and leather goods as well as energy production. However, its troubles with housing, health, and poverty may make it difficult to reconstruct millions of lost homes.

Stute says cities and nations need to adapt for more floods, whether it’s through raising settlements or installing more deep wells for access to clean drinking water. “We expect this flooding to be more common in the future,” he says. “Even if we stopped emitting greenhouse gases tomorrow we will see further increases in global temperatures [because] the Earth’s climate system needs time to adjust.”