As multiple countries around the world face drought conditions, dried lakes and rivers are revealing everything from World War II era bombs to human remains. 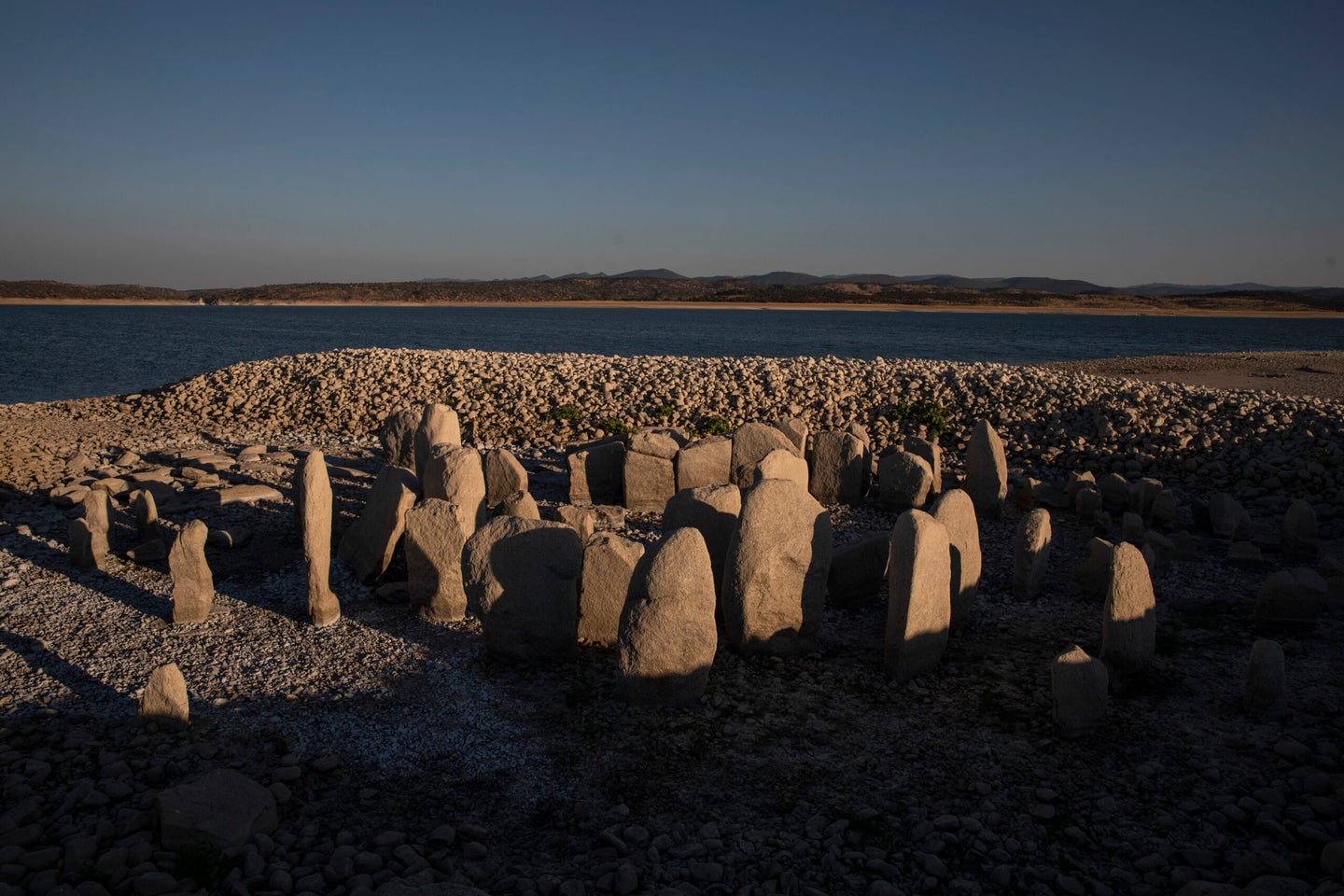 The Dolmen of Guadalperal, sometimes called "The Spanish Stonehenge," above the water level at the Valdecanas reservoir. Getty Images
SHARE

The summer of 2022 may be remembered the world over as one of the driest in recent history due to the impacts of climate change. Countries around the world are experiencing drought conditions, including 41 percent of the US and 47 percent of the European Union as of August 16. In the Horn of Africa on the eastern tip of the continent, 22 million people are struggling to find food after a years long drought has damaged crop yields and typically twice annual rainy seasons haven’t materialized. Meanwhile, China is facing its worst drought on record. Parts of the Yangtze River have become so low that it’s affecting the country’s hydroelectric power. The Sichuan provincial government declared that water flow to the province’s hydropower reservoirs had dropped by half and that the province was at the highest warning level of “particularly severe.” In response, the nation plans to try a a geoengineering technique called cloud seeding, that uses chemicals to generate rain.

China isn’t alone in seeing its rivers and lakes well below capacity. Satellite images from NASA show how much reservoirs in the western USes have emptied and the destruction of wildfires. The depleted bodies of water and parched landscapes the world over are also revealing long-buried artifacts from the past and other secrets.

On the Serbian portion of Europe’s Danube River, a graveyard of World War II area warships filled with explosive ammunition were uncovered near the town of Prahovo. These ships were sunk in 1944 and were part of a Nazi Black Sea fleet that were defeated while fleeing Soviet forces. According to local media, 10,000 explosive devices are within the wreckage and it is uncertain whether or not the devices can still detonate. These ships last made their appearance on dry land during a heatwave in 2003.

In Spain, a circle of dozens of megalithic stones dating back to 5,000 BCE was exposed in a corner of the Valdecanas reservoir. The reservoir is Spain’s central province of Caceres and is currently sitting at only 28 percent capacity. The Dolmen of Guadalperal, often called the “Spanish Stonehenge,” was discovered in 1926 by German archaeologist Hugo Obermaier. It was lost when the area was flooded in 1963 in a rural development project under Francisco Franco’s dictatorship.

In an interview with Reuters, archaeologist Enrique Cedillo from Madrid’s Complutense University said, “It’s a surprise, it’s a rare opportunity to be able to access it.” Cedillo is one of the experts racing to study the circle before it gets submerged again. Dolmens likes these are vertically arranged stones usually supporting a flat topped boulder. There are many of these stone formations scattered across Western Europe, but little is known about who erected them. Previous dolmen discoveries have uncovered human remains near the structures, leading to the theory that they are tombs or burial sites.

Lake Mead on the Nevada and Arizona border has grabbed headlines with a more gruesome set of discoveries. Since May 2022, five sets of human remains have been discovered the the western corner of the reservoir about an hour from the city of Las Vegas. Investigators are still unraveling the story behind these skeletons, with some local experts pointing to organized crime’s proliferation in Las Vegas.

“If the lake goes down much farther, it’s very possible we’re going to have some very interesting things surface,” said Michael Green, a University of Nevada, Las Vegas history professor, in an interview with the Associated Press. “I wouldn’t bet the mortgage that we’re going to solve who killed Bugsy Siegel. But I would be willing to bet there are going to be a few more bodies,” Green added.

However, these archaeological and forensic discoveries are coming at a high cost. While droughts are common throughout the Earth’s history, they can lead to potential famine and displacement of populations, like what the US experienced during the Dust Bowl of the 1930s. Experts continue to point to climate change as the primary reason why droughts and other extreme conditions continue to persist.