This yarn makes its own electricity 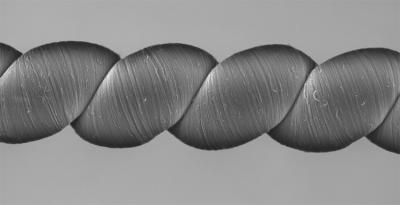 In the future, your workout—or your workout gear, to be precise—might generate enough energy to charge your activity tracker. Researchers from the University of Texas at Dallas and South Korea’s Hanyang University (among other institutions) have figured out that by twisting carbon nanotubes into yarn, forming what they call a “twistron harvester,” they can harness mechanical energy and turn it into electricity. They published their results this week in the journal Science.

“The easiest way to think of twistron harvesters is, you have a piece of yarn, you stretch it, and out comes electricity,” says lead author Carter Haines, a nanotech researcher at the University of Texas at Dallas.

To be clear, Haines isn’t especially interested in getting your fitness tracker to work longer. He is, however, interested in tapping into the waves of mechanical energy—from ocean waves, to human motions like the vibrations we create when we walk along the sidewalk—and finding a way to use it. We may have learned to harvest the power of the atom, but when it comes to converting mechanical energy to electric, our only economically feasible options are hydropower and wind. The technique detailed in this new study may bring us one step closer to harvesting mechanical energy for a wider variety of uses.

We’re not talking about the kind of yarn you knit with. Haines and his co-authors used carbon nanotubes—structures with diameters more than 10,000 times smaller than a human hair. Carbon nanotubes are perhaps most famous as the key ingredient in Vantablack, a super-black “paint” that absorbs 99.965 percent of the visible light that hits it.

The researchers took sheets of carbon nanotubes and spun them in a way reminiscent of the spinning wheel on which Sleeping Beauty pricked her finger. One might say the resultant electrical charge was their own Prince Charming.

“We just have little electric motors, and we turn on the power and it spins. And we can attach that sheet to the motor, and it spins into yarn—just like you’re making sheep’s wool,” says Haines. “The one additional trick is we twist the yarn to a very high degree until it starts to coil on itself. Under the right conditions, you’ll get a nice coil like a spring, and if you get the spring, you have the stimulus you need to create electricity.”

All the resulting twistron harvester needs is a bit of an electrolyte—a substance that, when dissolved in water, helps the solution to conduct electricity. A bit of salt water does the trick, charging the yarn. When the yarn is twisted or stretched—when someone wearing pants woven with the material touches their toes, for example, or when a wave washes over a sheet of the stuff—the electric charges on the yarn come closer together, increasing their energy.

So far, Haines and his colleagues have been able to sew the twistron harvester into a shirt, where normal breathing stretched the yarn and generated an electrical signal. Right now, carbon nanotubes are relatively expensive. But Haines doesn’t think their use in smart home devices is too far off. It’s easy to accumulate hundreds of sensors that each need only a tiny bit of power—but that would be a pain to endlessly fill with batteries or plug into your house’s electrical system—so perhaps small quantities of twistron harvesters could go a long way in making your devices self-sufficient.

In the future, as nanotube costs decline, Haines hopes they can be used to harvest power out of ocean waves.

“You need a good device that will harvest that energy,” says Haines, “but not break down over time.” And the ocean, in the form of salt water, already provides the electrolyte solution the nanotubes need.