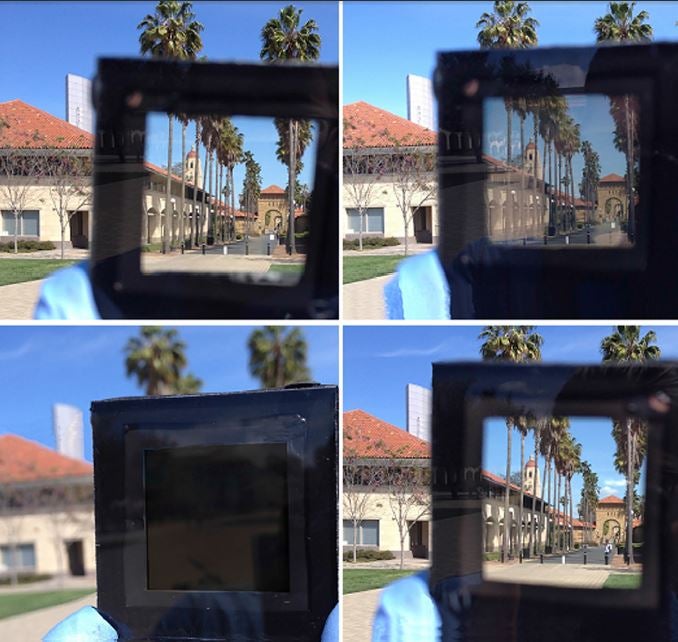 In a world where even mundane devices like water bottles and toothbrushes have become smart and connected, it’s easy to scoff at yet another attempt at smartifying practical gadgets. But new technology for smart windows, described today in the journal Joule, might actually be an intelligent idea. That’s thanks to their energy-saving potential: Dynamic windows that darken when the sun is shining on them could help reduce cooling costs in the summer, just like putting down the blinds does. And with the help of an internet connection and an intelligent schedule, these could be automatic, so you wouldn’t have to remember when to turn them on and off.

Windows that tint on demand already exist—one prominent class of them is known as electrochromic windows. In fact, if you’ve flown on a Boeing 787 Dreamliner, you’ve seen electrochromic windows on the fuselage, which dim with a button’s press, either by the passenger or the flight crew. But a group of researchers at Stanford are aiming for a better, more dynamic one: Their prototype goes from transparent to opaque in less than three minutes. And it does it using an innovative approach.

Electrochromic technology in general isn’t perfect, says Ioannis Kymissis, an associate professor of electrical engineering at Columbia University. “They’re not amazing, but they’re not terrible,” he says. “For privacy applications, they’re not as high performing as people would like.” In other words, they might not get dark enough to be totally opaque, and the transition time can be slow. (One brand, SageGlass, says their windows take between 7 to 12 minutes to transition.)

But this new approach is clever, says Kymissis, who wasn’t involved in the new research. Their method involves using ions from two metals, like copper and silver, in an electrolyte gel on the window. The glass also needs to have indium tin oxide in it, a transparent conductor that’s ubiquitous in television and smartphone screens. By applying a negative electrical voltage, the window becomes dark because the ions form elemental, solid metal, which is opaque. A positive voltage causes the metal to dissolve back into ion form, allowing the light to come through.

Chris Barile, the study’s first author, who’s now an assistant professor of chemistry at the University of Nevada, Reno, says the charge is only needed to change the window’s opacity. “We designed it so that when you do unplug the window, it’s stable,” Barile says. “Whatever state you leave the window in, it will stay in.”

So far, the researchers have developed a window that’s smaller than 10 square inches in size, or less than 2 inches per side, which is pretty small and useless (unless you’re an ant). They hope to scale it up, though, to windows that are over three feet per side. “This is the big challenge,” Barile says. As the voltage travels across the surface of the window, it drops, making the device work less effectively.

It’s early days for the research. “We literally make these with our hands,” he adds. “Students who have worked on the project basically say it’s like arts and crafts.” The idea’s simplicity gives him hope that it could one day be scaled up and commercialized, and he sees applications for the research not only in buildings, but cars too.

In the meantime, there are always blinds, which, yes, can be internet-connected.