Trees help keep you cozy, even when you’re indoors 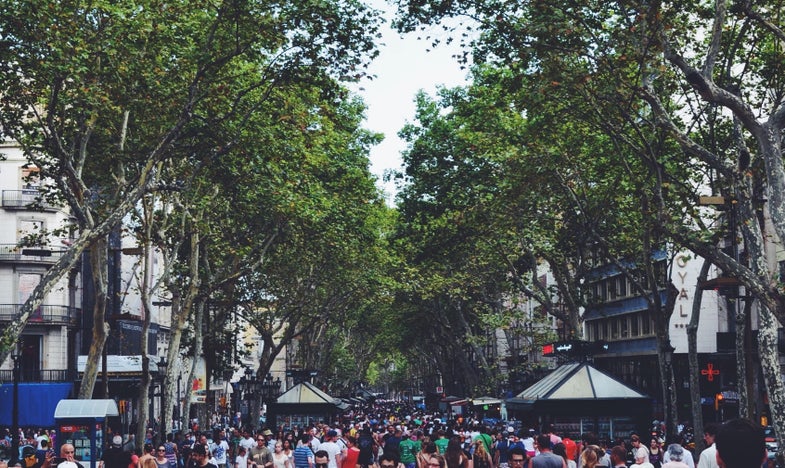 Even one city tree can make a difference.

Trees provide beauty when they bloom and shade when it’s hot. They are a symbol of the environment, hence the term “tree huggers” to describe eco-activists. They even inspire (often florid) poetry.

And now, scientists have learned that urban trees — even just a single tree — can help homes and office buildings save energy by blunting the chilling power of a stiff wind. Trees keep pedestrians more comfortable when they stroll down the street, and they help lower building heating costs by reducing wind pressure. Even trees without leaves can help slow the wind down.

These are important contributions for coping with the effects of climate change. The knowledge potentially could help urban planners design buildings, streets and city blocks to enhance peoples’ comfort and prevent energy loss. It also could improve weather forecasts by helping meteorologists predict the impact of storms on structures and pedestrians. The findings, detailed in a new study, were published in the journal Advances in Water Resources.

“Wind pressure is responsible for as much as a third of a building’s energy consumption,” said Marco Giometto, who wrote the paper as a civil engineering postdoctoral fellow at the University of British Columbia (UBC). “We were surprised to find such a dramatic decrease in wind speed.” The researchers also found that “trees act as a filter, protecting us from what’s above, that is, high wind speeds, turbulence and particulate matter,” such as smoke from wildfires and other pollutants, he added.

The scientists used remote-sensing laser technology to design a highly detailed computer model of a Vancouver neighborhood down to every tree, plant and building. Then they used computer simulation to find out how different scenarios — no trees, trees in full leaf and bare trees — affected air flow and heat patterns on the streets and homes. They compared the simulated scenarios against ten years of measured wind data from a nearly 100-foot tall research tower operated by the university in the same Vancouver neighborhood.

The modeling is believed to be the first to simulate a real urban neighborhood in such extreme detail, according to study co-author and UBC geography professor Andreas Christen.

The researchers found that removing all the trees could increase wind speed by a factor of two, “which would make a noticeable difference to someone walking down the street,” Giometto said. A ten-mile-an-hour wind speed “is pleasant,” he added, whereas trying to walk in a wind twice that speed “is more challenging.” Moreover, the scientists found that removing all the trees around buildings increased the buildings’ energy consumption by as much as 10 percent in the winter and 15 percent in the summer.

While the researchers found that trees reduce energy use in the summer, they did not specifically study their role in reducing the urban heat island effect, a phenomenon that makes cities hotter than nearby rural areas. Many studies already have focused on the “thermodynamic effects of trees and their impact on the heat island,” Giometto said, noting that “they indeed have an impact and help to reduce the heat island.”

Even bare trees can slow winds, although not as much. “We estimated that [leafless] deciduous trees in winter exert a force against the wind that is approximately three times lower than the same force they could apply in summer,” said Giometto, now a postdoctoral scholar at Stanford University. “This is realistic if one considers that trunks and branches are still present in winter, but leaves are gone.”

Nevertheless, bare trees “reduce pressure loading on buildings throughout the year,” said Marc Parlange, who supervised the research wile professor of civil engineering at UBC. “It’s not only evergreens that are important in the city.”

As an air particle approaches a tree, depending on the foliage density of the tree itself, it slows significantly due to the forces each leaf and branch exert on it, Giometto said. “The final result is that local wind speed in the leeward side [the side sheltered from the wind] of the tree is significantly reduced,” he said.

“In North American suburban areas, a single tree can be relatively large when compared to the typical building size, and can thus effectively shelter the building,” he added. “Because of this sheltering effect, the pressure gradient the building experiences is likely to be reduced when compared to that the building would experience in isolation.” Heating and cooling costs will drop as a result, since those same forces push air into buildings through small gaps and openings — cold air in the winter and hot air in the summer.

Giometto noted that there are no scientific data yet that can determine the best spatial deployment of trees to maximize comfort or minimize energy consumption. However, the study represents “a first and necessary step toward future research aimed at answering such a question,” he said. Such research must “focus on the impact of trees on the urban hydrology, on the urban radiation budget, as well as on trees effects on atmospheric turbulence, heat, humidity and pollutant dispersion,” he added.

“The beneficial effects of trees in reducing wind speed was actually well known by farmers before this study,” he said. “Now we have a tool to quantify it and help the design of future windbreaks to maximize their effects.”