An overwhelming amount of plastics hauled from the patch trace back to fishing industries in Japan, China, South Korea, and the US. 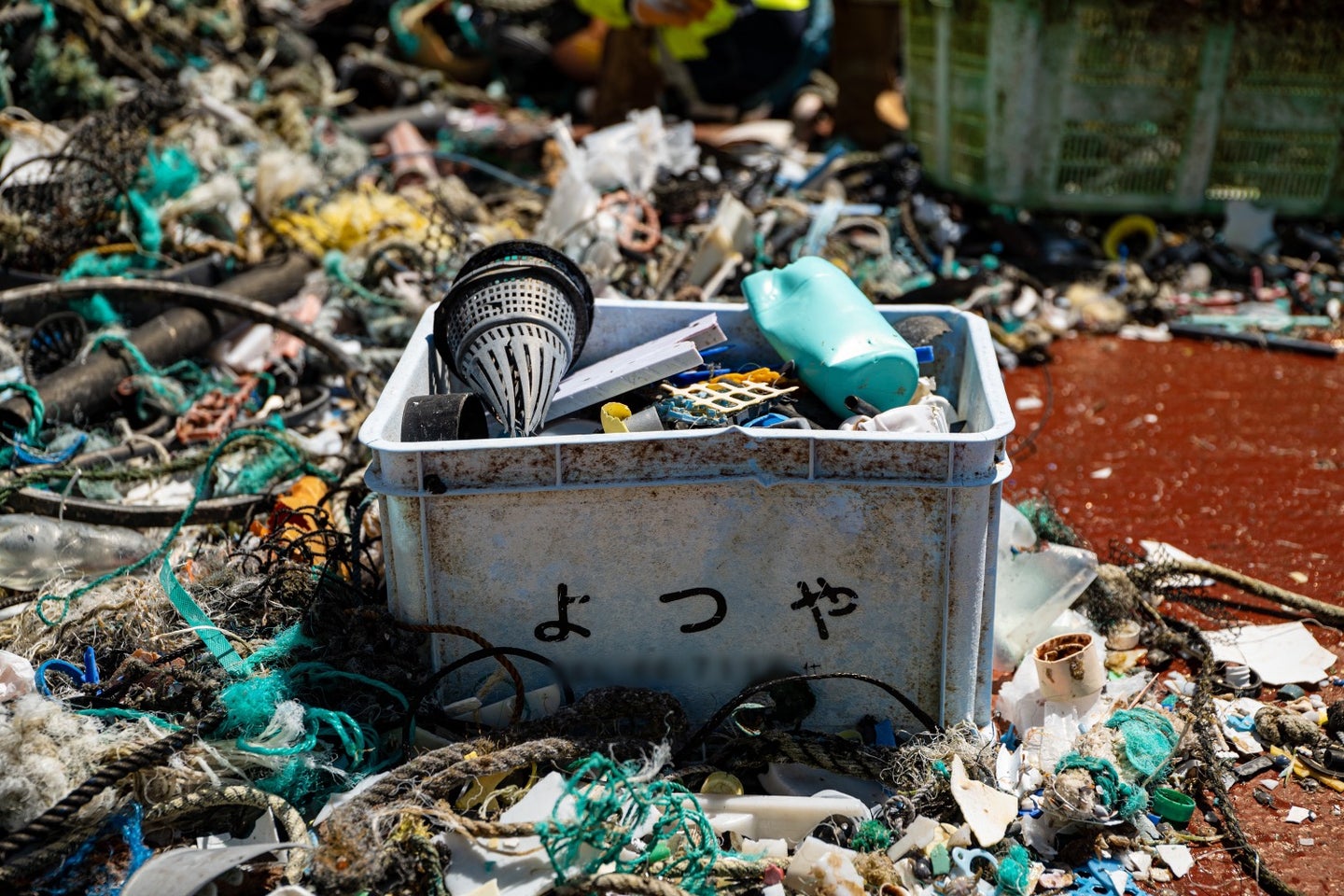 Fishery plastic was extracted by nonprofit organization, the Ocean Cleanup. This was found in the Great Pacific Garbage Patch along with many crates and buoys originating from fishing activities. The Ocean Cleanup
SHARE

For decades, our oceans have been filling up with trash. The North Pacific Garbage Patch, also called the Great Pacific Garbage Patch, has accumulated approximately 80,000 tons of plastic waste—and that estimate continues to climb. Most of the litter in the ocean is delivered by rivers that carry waste and human pollution from land to sea. But the origins of floating debris in offshore patches haven’t been fully understood. A  recent study published in Scientific Reports has identified one important source of the trash: the fishing industry.

Between 75 to 86 percent of the plastics floating in the Great Pacific Garbage Patch come from offshore fishing and aquaculture activities, according to an analysis of the trash collected by nonprofit project the Ocean Cleanup. Major industrialized fishing nations, including Japan, China, South Korea, the US, Taiwan, and Canada, were the main contributors of the fishing waste. “These findings highlight the contribution of industrial fishing nations to this global issue,” says Laurent Lebreton, lead study author and head of research at the Ocean Cleanup.

The Great Pacific Garbage Patch, a region twice the size of Texas between the West Coast of North America and Japan, is one of several vortexes in the ocean where waste accumulates. Created by spinning currents, or gyres, each vortex churns and crushes plastics into tiny undegradable bits that are tricky for cleanup efforts to scoop up. Plankton nets are used to collect these microplastics, often no more than 5 millimeters in size, says Lebreton. “But it is currently impossible to retrace an accurate origin for this pollution,” he says.

[Related: The great Pacific garbage patch is even trashier than we thought]

Since 2018, the Ocean Cleanup has been working to remove less common larger debris, which can sometimes be identified. The team’s approach uses vessels that pull a long U-shaped barrier through the water, guiding the larger plastics into the catch system. “This provided us with a unique opportunity to study larger plastic objects that were not the focus of previous research efforts,” says Lebreton.

In a 2019 mission, the system pulled up more than 6,000 plastic objects that were larger than 5 centimeters (the threshold for large debris). While a third of the haul was unidentifiable, the research team sorted fish boxes, oyster spacers, and eel traps. This fishing and aquaculture gear was the second most common type of hard plastic collected, making up 26 percent.

Like the rest of the sectors of our economy, fisheries adopted plastics for its light weight and cheap manufacturing costs. Those plastics can persist for decades.

“We found a fishing buoy dating from the 60s and a crate from the 70s, so this must have been building over time,” Lebreton says, noting that the fishing industry has only expanded since the last century. “More than half the ocean surface is now being fished, increasing the chance of fishing gear being lost, discarded, or abandoned in the ocean.”

[Related: Humans created an extra 8 million tons of plastic waste during the pandemic]

Generally, the debris in the Great Pacific Garbage Patch has been increasing in concentration and in size, according to a 2020 study by the organization. “This would suggest the situation is worsening, which is expected at this stage with an exponential increase in plastic production over the last two decades,” Lebreton says. “This is why it is important to study and identify this pollution so that future inputs can be mitigated.”

The Ocean Cleanup project has an ambitious goal to remove 90 percent of marine plastic waste by 2040. Since last year, the team’s upgraded system plucked over 100,000 kilograms of floating plastics from the ocean; however, marine biologists have expressed skepticism about the efficiency of such cleanup efforts and raised serious concerns these techniques could harm wildlife. Lebreton says that the nonprofit’s efforts should not be a permanent solution: “We want to go out of business eventually.” The best way to decrease plastic waste in these waters is to stop it at the source, he says—cleanup technologies can help pin down the cause and origin of pollution to inform regulation and management. This could include regulating the gear fishing vessels use or how the ships manage their waste, Lebreton says.

“I trust making this pollution visible [through cleanup efforts] has a significant impact on awareness and also the general understanding of the issue,” he says. “Documenting floating plastic pollution should play a role in the design of mitigation strategies. General public awareness can help in pushing legislation.”

Images and captions from the Ocean Cleanup.