Guess how many giant patches of garbage there are in the ocean now? 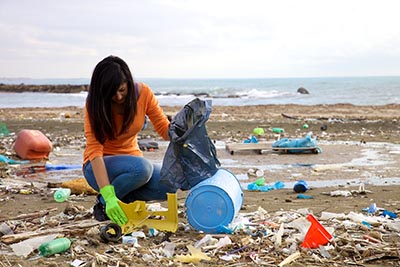 “We are living in a plastic age,” Captain Charles Moore tells PopSci. “We’re ignorant of its dangers, and we haven’t learned properly to fear or to respect it.”

Moore, the founder and research director of the Algalita Marine Research and Education Foundation, is fresh off of a six-month excursion investigating plastic pollution in the South Pacific. He found that the waters in the South Pacific Gyre—a remote location that begins some 3,800 miles east of Latin America—are currently choked with plastic.

That our waste has such a strong presence is disheartening, but not wholly surprising. A recent study found that since the 1950s humans have made 9.1 billion tons of plastic; equivalent to the weight of 93,000 of the world’s heaviest aircraft carriers. But this new garbage patch shows just how far we’ll have to go to clean up our act. Moore estimates that the new patch could cover one million square kilometers, making it 1.5 times bigger than the state of Texas, but the National Oceanographic and Atmospheric Administration cautions that the sizes of these patches can’t be determined with scientific rigor.

Gyres are large systems of circulating ocean currents, kind of like slow-moving whirlpools. Though the oceans are home to many gyres, there are five—the North Atlantic Gyre, the South Atlantic Gyre, the North Pacific Gyre, the South Pacific Gyre, and the Indian Ocean Gyre—that have a significant impact on the ocean. The big five help drive the so-called oceanic conveyor belt that helps circulate ocean waters around the globe. But in doing so, they also draw in the pollution that we release in coastal areas.

The most famous example of a gyre’s tendency to take out our trash is the Great Pacific Garbage patch located in the North Pacific Gyre. The patch is an area of concentrated (and mostly plastic) marine debris. While the patch was first postulated in the 1980s in a paper written by researchers for the National Oceanic and Atmospheric Agency (NOAA), Moore was the first person to lay eyes on it and recognize it for what it was: a confluence of human effluence.

Models created by researchers at the University of Hawaii gave Moore the inkling that the South Pacific Gyre might catch up to its northern kin.

“The theoretical model indicated that this area would be an accumulation zone,” says Moore.

So he went to see for himself.

Several years earlier Marcus Eriksen, the Research Director and co-founder of the 5 Gyres Institute (a nonprofit organization focused on tackling the worldwide issue of plastic pollution) had passed through the area and seen some plastic pollution. In a study he co-authored in the journal PLOS One he wrote: “Our estimates suggest that the two Northern Hemisphere ocean regions contain 55.6% of particles and 56.8% of plastic mass compared to the Southern Hemisphere, with the North Pacific containing 37.9% and 35.8% by particle count and mass, respectively. In the Southern Hemisphere the Indian Ocean appears to have a greater particle count and weight than the South Atlantic and South Pacific oceans combined.”

The results from Moore’s trawling of the area seem to suggest a bigger problem.

“The way Dr. Ericksen expressed it to me,” says Moore, “was that all of his trawls, he could have taken the plastic and held it in the palm of his hand. In my study, there were many trawls when the amount of plastic, I could not have fit in the palm of my hand.”

The plastic in the ocean doesn’t exactly present as the floating waves of detritus that the phrase “garbage patch” evokes. In fact, some argue that patch is something of a misnomer, and that a phrase like soup would be a better fitting—if emotionally disturbing—image. The patch isn’t generally filled with giant chunks of plastic like fully formed yogurt cups, old disposable sporks, or bottles of water. It’s mostly made up of the microbeads and plastic fibers that get washed out to sea when we take a shower or do laundry, along with the bits of plastic that break off of larger items. Unlike paper or cotton, plastic never actually breaks down, returning back to its chemical components so it can be reused in the biological processes that fuel life on Earth. Instead, plastic just breaks into smaller and smaller pieces.

But Moore was “lucky” enough to cut through a particularly dense patch in his first pass through. Instead of microscopic bits, there were pieces of debris he could actually see.

Moore used a device called a manta trawl. The trawl has wide wings that skim the surface, with a meter-wide opening made of mesh netting (with holes about 1/3 of a millimeter across). The net goes down about 20 cm (nearly 8 inches) below the surface and scoops up plankton, the tiny plants and animals that are a key food source to many animals such as whales and fish, along with whatever debris are large enough to get stuck.

When they drag the trawls up, Moore and his colleagues sort out their catch. These days, there’s frequently more plastic than plankton.

The swirling oceanic currents of Gyres make them a sort of oceanic desert. There isn’t much life in them, which makes every drop of food that much more valuable. The animals that pass through the gyres depend on plankton. But instead, they’re finding—and eating—plastic. This is bad, not just because plastic isn’t particularly nutritious, but because ocean plastics suck up chemical pollutants. And if these chemicals—some of which are now linked to hormone disruption and cancers—are eaten by fish, they eventually make their way up the food chain. Moore says that the first albacore that they pulled up on their trip into the patch had plastic in its stomach.

“We found six kilos of plastic for every kilo of plankton in our original 2009 study [of the North Pacific],” says Moore. His team hasn’t made a precise tally of the trash to plankton ratio in the South Pacific, “but my subjective feeling is that it’s about ten years behind the North Pacific,” he says.

Moore theorizes that the lag is due to differences in the adoption of plastic between countries in the global north versus in the global south. Countries like the United States have been using a large amount of plastic for a very long time, while countries in South America are just beginning to catch up. It’s the world’s worst game of tag.

Longterm, the only solution is to cut down on plastic pollution—by using less, but also by closing the loop. We need to make sure the plastic we use doesn’t end up in the waste stream in the first place.

“If plastic is the new god,” says Moore, “we haven’t been treating it with the fear and the respect that it’s due. We’ve been treating it as throw away—as trash. But we’re going to have to learn to fear plastic, because it’s extremely dangerous, both to our health and to the health of the ecosystem that we live in.”