The ocean floor is littered with adorable octopuses (and actual garbage)

Alongside the wild natural beauty, some evidence of humans. 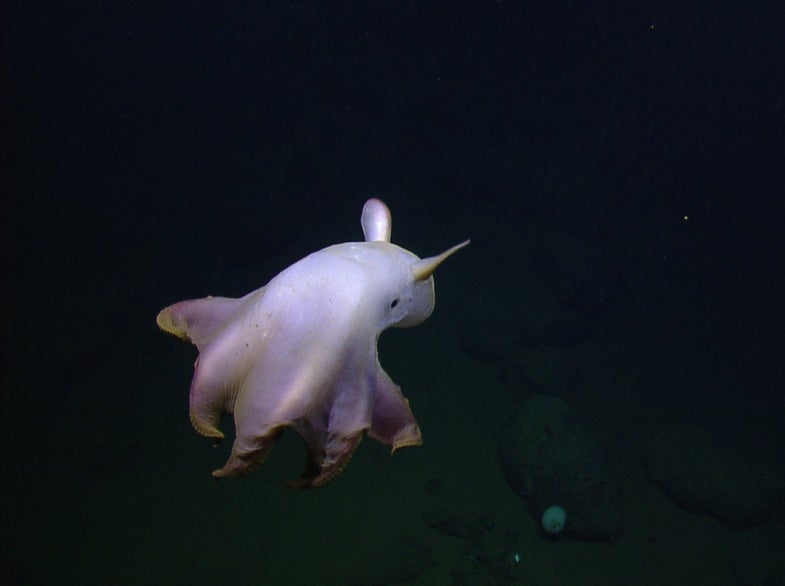 It’s easy to feel disconnected from those who do science. The people you read about making big discoveries seem so distant and learned. So today your biology homework is to watch this video of actual scientists—who are in charge of millions of dollars worth of deep-sea roving equipment—get all squeal-y about a lil octopus.

Now, are they hamming it up a little for the video feed? Maybe. But this is also a genuinely exciting find. Dumbo octopuses live multiple miles beneath the ocean surface, which makes them exceedingly difficult to study, and this was a rare glimpse at a living specimen. Plus, come on, it’s so cute! Those fins flapping like elephant ears, that rippling mantle, those twisting, turning suckers. Any scientist would be thrilled to witness a creature like that, much less a scientist who has prepared for this mission for months—probably more like years—and is now finally getting to see what life is like at the bottom of the Pacific Ocean.

This mission is entirely exploratory. The Nautilus’ task is simply to see what’s inhabiting the Davidson Seamount, a 7,480-foot-tall underwater mountain that recently became a part of the Monterey Bay National Marine Sanctuary. Like most of the ocean floor, researchers aren’t entirely sure what’s down there, but in order to protect the area they first have to take stock of it.

Last week, for instance, the scientists discovered a teeming mass of octopuses brooding over their eggs. Clusters of this size have never been seen before. And if researchers return to this area in a decade to find no octopuses, or only tiny colonies, they might ask themselves whether something in this fragile ecosystem has changed. That kind of conclusion would be impossible to draw without this year’s observations.

The seamount is also a potential oasis for unusual life, making it extra important to chronicle the critters living down there. As the Nautilus Live blog points out, this bit of the ocean floor is mostly flat except for the mountain, and being nearly as tall as the Sierras, it has the capacity to create unusual currents that could foster life unique to the area.

Unfortunately, alongside the octopuses thriving deep beneath the surface, the researchers found something else: trash. From Dr. Pepper cans to metal pipes, our garbage has spread out to points two miles underwater and dozens of miles from the California coast.

Our own @addietime is in the deepest parts of the Monterey Bay NMS using ROVs to explore parts of the ocean no humans have ever seen before. And yet, signs of humans are everywhere. Photos: Ocean Exploration Trust/NOAA #NautilusLive pic.twitter.com/oxATN5DmLM

Only a few hours into our first ROV dive and we think we have already spotted some trash on the deep ocean floor. >3000 meters down and 80 miles offshore. #marinedebris #NautilusLive

It is, of course, not the first time we’ve found deep-sea garbage. In May of this year, researchers discovered a plastic bag at the bottom of the Mariana Trench. A study of deep-sea debris noted that “The highlight of this study was the ubiquitous distribution of single-use plastic, even to the greatest depths of the Mariana Trench, indicating a clear link between daily human activities and remote environments where no direct human activities occur.”

You can go look at the photos upon which that study was based—it’s literally called the Deep Sea Debris Database, and it’s nothing but photos of garbage on the ocean floor—but we’re going to go out on a slightly happier note.

Here is an octopus checkin’ out the camera, or possibly just accidentally appearing to look straight at it.

And here are some scientists mildly freaking out over the shimmering water and these shimmying octopuses.

Scientists aboard @EVNautilus observe over a thousand deep sea octopus near #DavidsonSeamount! Never before seen in these massive aggregations, clusters were discovered near shimmering fluid seeps – previously unknown to occur in @MBNMS! #NautilusinMBNMS pic.twitter.com/6AYTigf9xP