Is "trash to table" the next dining trend? 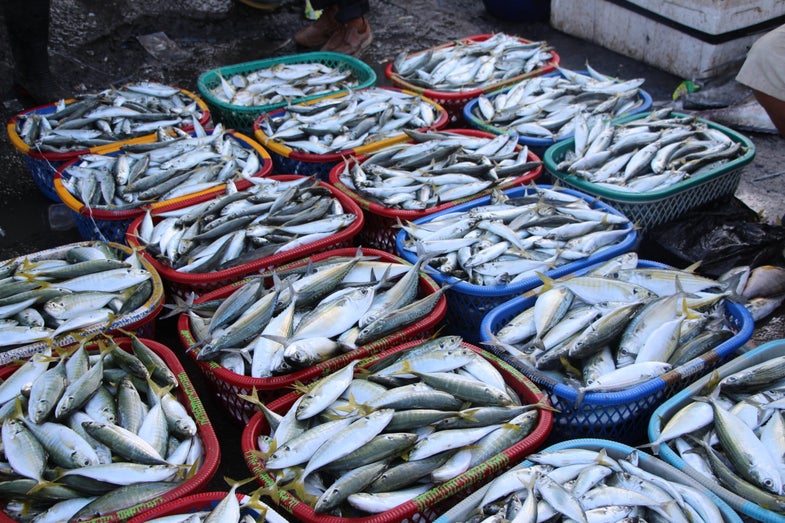 What goes around comes around, and that might be bad news for seafood lovers. We already know that eating fish comes with risks of ingesting metals like mercury and lead, or pesticides like DDT. A new paper published today in Scientific Reports now reports that the fish we eat may also contain plastic particles and small fibers from the waste we produce.

The authors of the study, a team of scientists from California and Indonesia, bought fish from local fish markets and examined the contents of the animals’ guts. In both California and Indonesia, the researchers found manmade debris in the digestive tracts of roughly one in four fish. Their study is one of the first to show a direct link between our garbage and fish that’s sold for consumption. The next step is to understand how plastic debris in our seafood might adversely impact human health.

“This is a wake-up call to the fact that our waste management systems are not be as tight and advanced as they should be, and that might be coming back to haunt us through the food chain,” said Chelsea Rochman, a postdoctoral fellow at the University of California, Davis, and lead author of the study.

In their study, Rochman and her colleagues bought 76 fish from a local market in Sulawesi, Indonesia, and found plastic in 28 percent of the fish, including in mackerel and herring. In California, the team examined 64 fish from the Bay Area, and found manmade debris in a quarter of them, including in anchovy, striped bass, and salmon. They also sampled 12 Pacific oysters and found manmade debris in four of them.

Scientists don’t currently know whether or what amount of plastics in fish poses a threat to human safety. They do know, however, that plastics are associated with a cocktail of chemicals, some of which are carcinogenic, and some of which disrupt our hormone system. Once they enter the ocean, plastics can also become a sponge for other contaminants like pesticides and industrial chemicals.

Ingesting the guts of a sea creature, such as with whole sardines, mussels, or oysters, may entail eating these plastics, noted Rochman. “If we eat the whole thing, we are in fact eating whatever plastics or fibers that animal has ingested,” she said. “Will we suffer impacts from tiny pieces of debris being in our stomachs? It may just go right through us, but it might transfer out of our gut and go other places in our body.”

Questions like that are just a few of the many that still need to be answered, said Rochman. “Proper risk assessments have yet to be done, but they are absolutely warranted, and the EPA and other government agencies are calling for them,” she said.

Scientists have found manmade debris in all marine habitats, from shallow bays and estuaries out to the open ocean and down to the deep sea. Because of this, Rochman’s team tried to include fish with many different habitats and feeding behaviors in their study. They found no significant differences in contamination based on location or feeding habits, suggesting that exposure to manmade debris is ubiquitous. “It really seems like, overall, all species are being exposed to this material,” Rochman told Popular Science.

“When you walk out on the beach in Indonesia, you can wade into plastic that’s up to your knees.”

She and her colleagues believe they didn’t find as many plastic fragments in fish from California because the U.S. has a relatively thorough waste management system, where waste is transported from people’s homes to a landfill or recycling center. That infrastructure doesn’t exist in many Indonesia communities, Rochman said. In Makassar, Indonesia, where the researchers bought their fish, 30 percent of solid waste generated is not processed at all before ending up in a waterway.

Due to a lack of water sanitation infrastructure, plastic water bottles are often the cheapest way for Indonesians to get safe drinking water. That, combined with the fact that there’s no waste management to speak of in small island communities, means a lot of plastic bottles and other types of packaging get thrown directly onto the ground and eventually washed into the ocean, according to Susan Williams, a professor at the University of California, Davis, and another author of the study.

“When you walk out on the beach in Indonesia, you can wade into plastic that’s up to your knees,” Williams told Popular Science.

The presence of tiny plastic particles, or microplastics, is a growing problem worldwide. This February, a team of scientists estimated that eight million metric tons of plastic waste enter the world’s oceans each year, and predicted that that number will increase over the next decade. They also named Indonesia as one of the top contributors of plastic to the world’s oceans, along with China.

Reducing plastics in the ocean will require a concerted, multi-pronged effort, according to Rochman and Williams. Some interventions might include banning plastic microbeads in personal care products, working with big plastic producers to search for alternative materials, or even possibly putting fiber filters on washing machines, said Rochman.

Wiliams believes developed countries that are among the top producers of plastic — including the United States — should help developing countries that struggle with waste management. Although China and Indonesia produce more plastic in total than the United States, the US produces more than twice as much plastic waste per person as China does.

“Our university collaborators and the school kids we work with, they’re aware that this is a problem,” she told PopSci. “They just have fewer tools than Californians or Americans do to address the problem.” 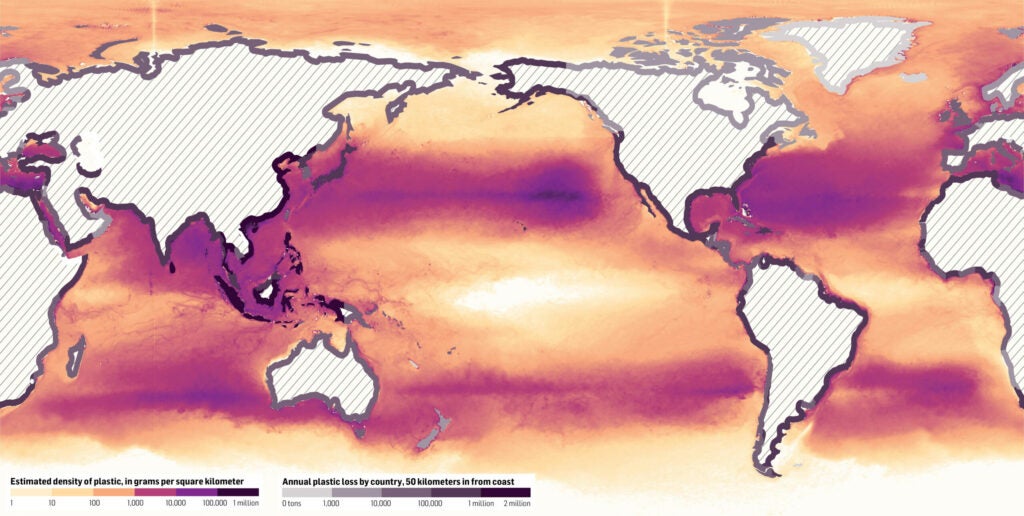 Once And Future Ocean Plastic

This map combines two new models. One model shows where plastic goes. By sampling water at nearly 1,600 spots and combining that data with an ocean circulation model, one team of scientists estimates that ocean surface waters hold some 296,000 tons of plastic. They also pinpoint where the pieces are collecting. Meanwhile, a second team found out where the plastic comes from. By combining coastal population figures with plastic consumption and waste-management data, the model indicates where plastic most likely originates, as indicated by the colors along the coastlines. China tops the list.
conservation
contamination
ecology
Environment
fish