It’s a bird! It’s a plane! It’s a drone that loves trash!

A New Jersey man is using drones and machine learning to measure plastic pollution on beaches. 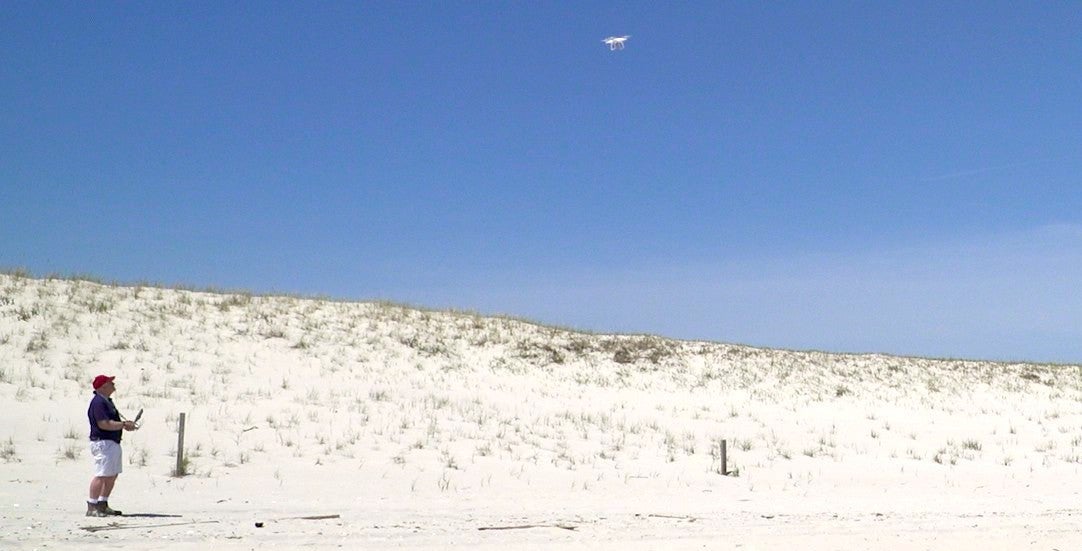 It’s hard to keep track of how much plastic is in the ocean. We’ve all heard about the floating garbage gyres in the Pacific, but it’s such a large problem that it defies statistics. Scientists estimate that anywhere from 5 to 13 million metric tons of plastic trash make it into the world’s oceans each year. Only a fraction of that plastic floats on the ocean surface. The rest washes up on beaches, lingers underwater, or sinks to the sea floor, but no one knows precisely how much goes where. UK nonprofit The Plastic Tide wants to gather some harder data on all that plastic. Founded by 34-year-old Peter Kohler, the group is developing a method for measuring marine litter which they hope will eventually be used around the world.

“We’re creating the eyes and the brain to track plastic pollution,” Kohler said. Drone-mounted cameras serve as the eyes, taking thousands of aerial photos. The brain is a machine learning algorithm, which Kohler and his collaborators are training to recognize plastic fragments.

If a website has ever asked you to click on all the photos of a stop sign to verify you aren’t a robot, you’ve helped train a machine learning algorithm to identify street signs. In this case, the algorithm needs to distinguish bottle caps, plastic bags, tampon applicators, and other plastic bits from sand, shells, stones, driftwood, and all the other flotsam and jetsam that washes up on beaches.

Training the algorithm requires a lot of photos of beaches and a lot of human eyes to tag the plastic in those photos. The Plastic Tide has uploaded all the photos they’ve collected to Zooniverse, a citizen science portal, so anyone can go online and tag plastic. This past March, during British Science Week, the effort got a boost when students across the United Kingdom identified more than 1.5 million plastic fragments in photos.

Many of those photos weren’t from Britain, but instead from a New Jersey beach across the Pond. The photos were taken by 72-year-old Morris Enyeart, who has contributed more than 7,000 images to The Plastic Tide. Enyeart could have retired a couple years ago, when he sold his web design company. Instead, he started looking for a new project. “I wanted to do something new, something challenging, something that would benefit other people,” he said.

Enyeart started by getting a commercial drone pilot’s license, with the plan of surveying the litter along his favorite New Jersey beach. But he soon realized that a photo survey had limited utility. “I can fly the drone. I can take pictures. But what benefit is that other than just having pictures?” Enyeart said. “That’s where machine learning changes the game.”

Enyeart came across The Plastic Tide‘s website and quickly saw the utility of adding machine learning to his own project. So he picked up the phone and called Peter Kohler. Since then, Enyeart has conducted more than 100 surveys of Island Beach State Park near his home in Barnegat, New Jersey, and uploaded thousands of photos to help train The Plastic Tide’s algorithm.

In response to interest from Enyeart and others, Kohler founded an international coalition of scientists and drone enthusiasts called Marine Litter DRONET, with the mission of developing an international standard for drone surveys of plastic drones. “There’s no sense in inventing from ground zero if you can learn from other people,” he said. Today there are members in 14 countries.

“You’ll have someone from Svalbard on the call from the Arctic, and someone in New Zealand, someone in Australia,” Kohler said. “It’s a cool international conglomeration of ideas and idea sharing for this really powerful cause.”

Currently, the machine learning algorithm only spots plastic 25 percent of the time that humans do, but Kohler hopes to get that up to 85 percent in the next year. Once the algorithm and the survey protocols are ready, he plans to make them available to anyone with the hope that governments will use the technology to scan large swaths of coastline with autonomous drones.

Kohler says governments can use the data to identify which beaches are worst hit and target those for cleanup. The data can also be used to help policymakers understand which types of plastic are doing the most damage, and that information can then be turned into action. A plastic bottle ban, for example, would turn off one of the spigots in the plastic waste stream flowing into the ocean. “In a nutshell, it can tell you which taps of plastic wastage to turn off on land to maximize the impact in the sea,” Kohler said.

Kohler and his colleagues hope to adapt their technology to track pollution on the sea surface and sea floor. It could someday be used to track the distribution of plastic around the globe. For now, they’re focused on gathering more photos to further hone the algorithm.

On a recent spring morning, Enyeart ran through his preflight checklist for his 128th flight at Island Beach State Park. He noted the starting longitude and latitude, temperature, cloud cover, wind speed, and tide. He measured out a 100 yard section, marked it with orange cones, and checked the blades of his drone before launching it. Once the drone was in the air, Morris flew it back and forth above the beach, camera clicking away, each photo breaking the unending stretch of sand and plastic litter into digestible pieces.

“Almost everybody has some kind of skill that they can bring to bear, even if it’s just talking to other people about how big the problem is,” Enyeart said.