These clams use poop to dominate their habitat

The chimneys of feces made by wood eating and dwelling clams may help them get more food for themselves. 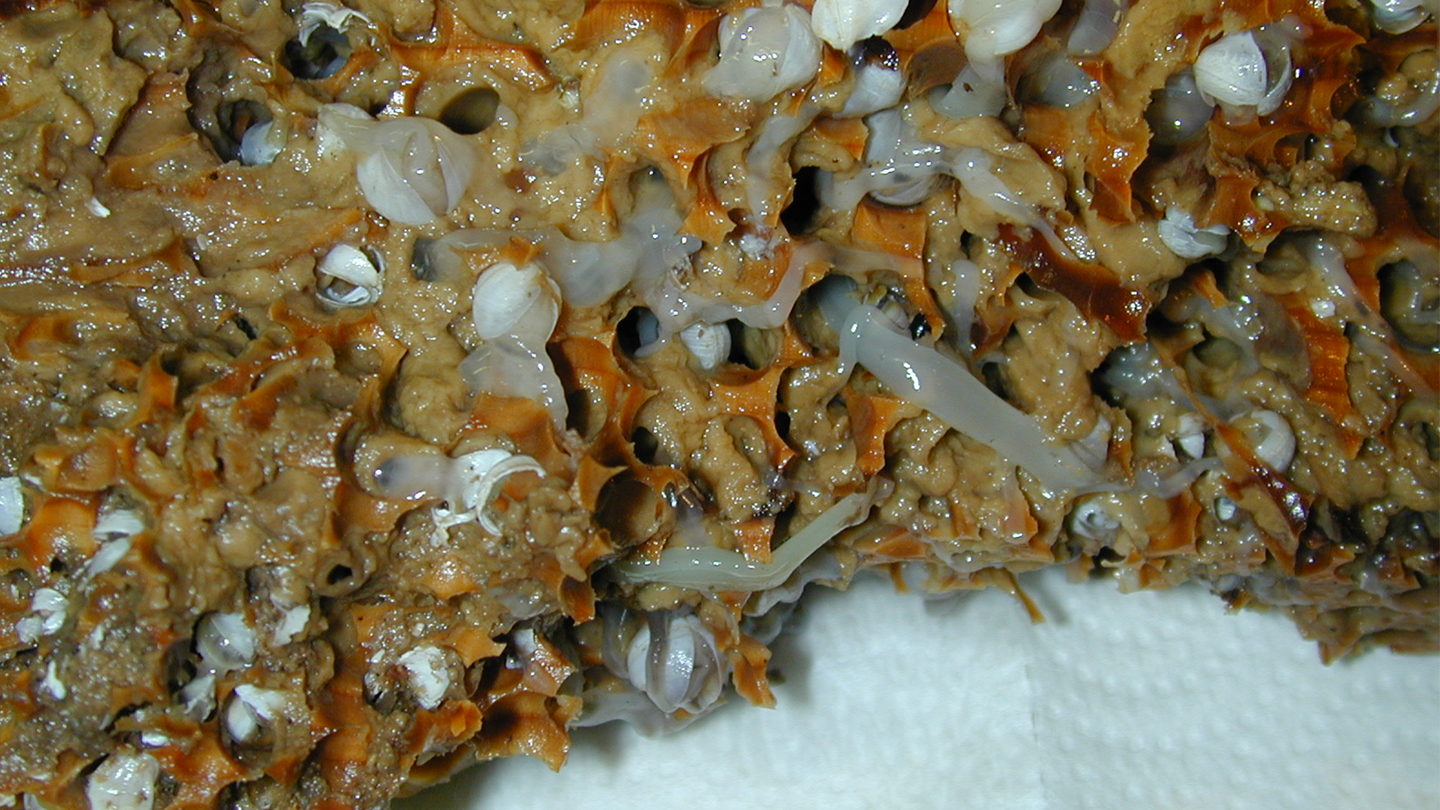 Termites and beetles are typically the first animals that come to mind when it comes to burrowing in wood and chewing through it. However, some clam species thrive on the sunken pieces of wood at the bottom of the sea. The aquatic kindling provides them with both nutrients to live on and a habitat. There is not a lot of timber in the ocean, but the pieces that do end up in the ocean from fallen trees or from ships can teem with life—life we still don’t know too much about.

A new paper published Thursday in the journal Marine Biodiversity, details how one group of wood-boring clams has evolved to build chimneys of their own poop as a way to make sure they get more of this marine wood for themselves.

[Related: Sex, starvation, and saltwater moats: snail farms are wilder than you could ever imagine.]

The wood-boring clams in the study have shells that are about the size of a pea. They dig into the sunken wood, forming a borehole that becomes their source of food and shelter in a world that is pretty inhospitable.

“There are two challenges every sea creature has to face: getting pure water in, so you can get oxygen to your gills, and getting rid of your waste,” says Janet Voight, the Associate Curator of invertebrate zoology at the Field Museum in Chicago, and the study’s lead author. “Because nobody wants to live in their poop. But here are these clams living with theirs, and actually thriving.”

Some of the wood from the seafloor can have an “amazing array of animals” for months or even years after it hits the seafloor, while others can become so gnawed on and chewed-up, that the wood can completely crumble when handled. Voight wanted to figure out why the wood samples were so vastly different. After taking stock of the species of wood-boring clams that were present in sunken wood samples from all over the world, she noticed a pattern.

“There are six main branches in the wood-boring clam family tree, and every woodfall that was bored so heavily it was crushable by hand turned out to have been bored by a species from the same single branch of that family tree,” says Voight. “That’s not supposed to happen, you just assume that all wood-boring clam species, which tend to look pretty similar, bore into wood the same way. And yet, here’s one group that’s doing something totally different.”

The clams in the clade Xylophaga dorsalis were primarily responsible for all the chewing and pooping.

Previous work suggested that the more chewed-up wood was due to warmer water or more larvae nearby, but it might be the very nature of the clams that’s responsible. All of these extra-efficient and related species within the clade have a common trait located where their poop is expelled. As the clams dig and move into the wood, they fill the space around them with their own feces.

[Related: Biologists vastly underestimated how much whales eat and poop.]

This action isn’t done on purpose—it’s anatomical. The clam’s tiny shell does all of the work to dig the clam into the wood. As the shell digs in, the siphons (tubular body parts that take in water to get oxygen and expel waste) stick out behind it. Most wood-boring clams have siphons that are equally long and stick out into the water, but these clams have a shorter waste siphon.

According to Voight, the shorter siphon used to expel the de-oxygenated water and feces stays inside of the borehole, so as a result “they poop in their borehole. They just have to, unless they really, really push.”

The waste stays right there with the clam, forming a fecal chimney that wraps around the siphon. While this isn’t the most hygienic way to live, it doesn’t appear to cause immunity problems in the clams and questions remained as to why they evolved this way.

The team hypothesized that these fecal chimneys might serve as a cue for clam larvae to settle in the wood. The free-floating larvae might be able to detect the poop and make their way to it to make a home alongside members of their own species. However, space eventually becomes an issue the more larvae follow these poop beacons and resources dwindle.

“It’s a little like if you have you have a one bedroom condo, and you’re saying, ‘Come on over, let’s have a party! You can eat that, and we’ll eat this wall.’ Pretty soon you’re out of house and home and the neighbors don’t like you,” Voight explains in an interview with PopSci.

These clams have an unusually high tolerance of environments with low oxygen and additional physical adaptations that may reduce to risk of sulfide poisoning from the waste. These adaptations help them survive and thrive in their filthy and crowded environment.

“I think it’s a live fast, die young strategy, where these guys just grab whatever resources they can get their hands on as population and are sending out babies as as fast as they can to find another piece of wood,” Voight explains.

The end result of this dominance is more wood for the poop chimney-producing species to eat, live in, and for their offspring to settle on.

Beyond just solving the mystery of the gross chewed-up wood with an even messier answer, Voight says that the study illustrates the importance of looking at ecology with an understanding of how different species are related to each other.

“I think this is a good representation of how little we know about the deep sea and how a little insight and multiple areas can be brought together to make a prediction,” says Voight.