Hundreds of millions of years ago, they swam with our aquatic ancestors. 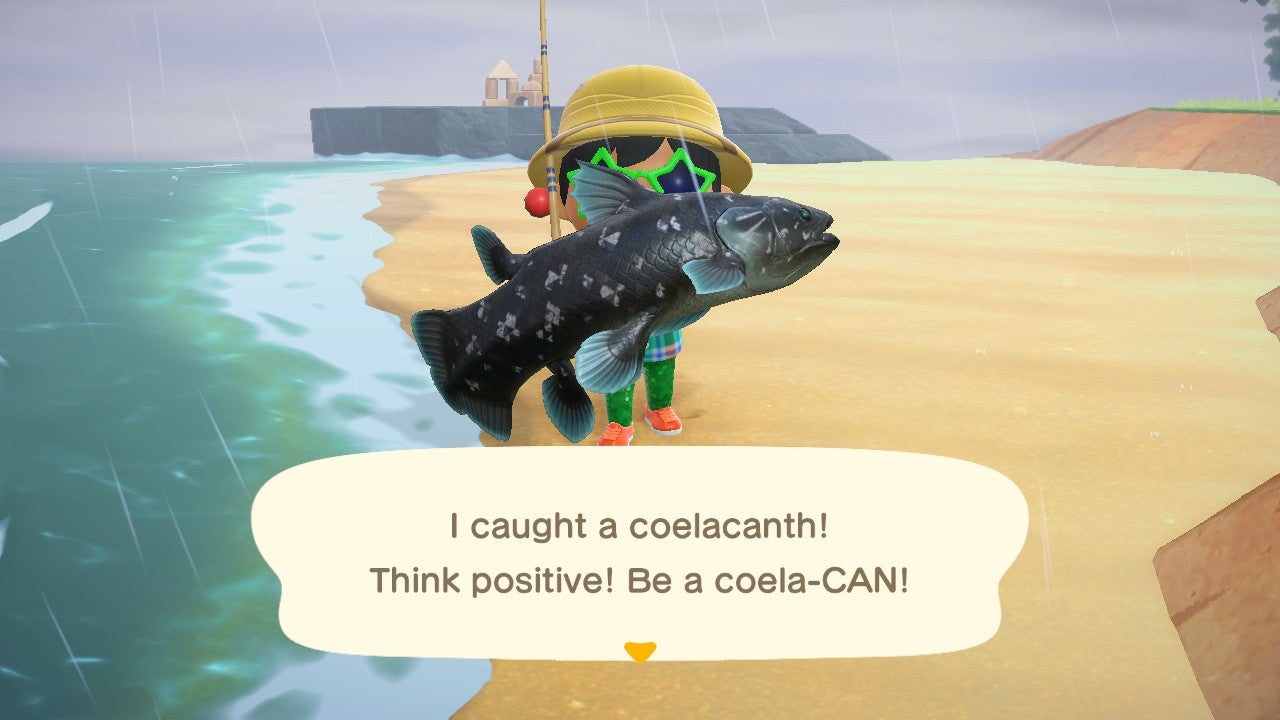 FACT: Animal Crossing’s rarest fish is one of the weirdest animals ever IRL

The newest version of the video game Animal Crossing is wildly popular right now, and as a lifelong fan, I couldn’t be more thrilled. Since the original came out on GameCube back in 2002, the basic gist has always been the same: You (a human) live in a village and make friends with your neighbors (all animals) while paying off loans to a raccoon who will build you sequentially bigger houses. One way of making money is by fishing. And since that very first game, there’s been one fish that is the most captivating and elusive of all: the coelacanth.

How do you catch an in-game coelacanth? One word: Perseverance. Well, it also helps to fish in the ocean when it’s raining, but the critter is so gosh-darn rare you’ll really have to work at it. I understand why Nintendo made virtual coelacanths so hard to find, because the animals are extremely special in real life.

Long thought to have gone extinct alongside the dinosaurs, the coelacanth’s rediscovery in 1938 is considered one of that century’s greatest zoological findings. In addition to its mysterious reappearance, the species is actually more related to human beings than it is to ray-finned fishes like trout or salmon. Hundreds of millions of years ago, they swam with our aquatic ancestors.

Tune in to this week’s episode to hear my ode to the coelacanth—from their underwater lava cave dwellings to tales of their co-existence with T. rex. I’ll even throw in some tips for distinguishing the coelacanth’s shape from the sea bass’ in Animal Crossing waters.

Given my recent professional fixation with disease transmission, I’ve found myself increasingly curious about something I’ve always wondered—why did plague doctors dress up like freaky birds?

While it’s not clear how widespread the use of these iconic costumes truly was (and there were certainly entire countries that found them ghoulish and silly), they definitely got some airtime in Europe starting around the 1500s. While the 1347 outbreak of Yersinia pestis infections known as “The Black Death” is the most infamous instance of European plague, the pathogen actually kept cropping back up for a good 300 years. Sometime during that long period of trying to keep epidemics at bay, some physician or another starting suiting up in distinctly birdlike attire.

But as silly as the costume looks to our modern eyes, it did have its uses: The oiled leather material covered every inch of skin, limiting risk of exposure to infection. The goggled mask further insured this, while iconic walking sticks—which made the physicians look even more like ghastly harbingers of doom—could be used to gesture at or help undress an ill patient (or, in some cases, keep swarming hoards from getting too close). In many ways, it functioned as a sort of rudimentary hazmat suit—and it provided far more protection from pathogens than anything else doctors were wearing at the time.

The most fascinating—albeit misguided—component is the ominous beak itself. Physicians stuffed these leather schnozes with the stinkiest herbs and tinctures they could get their hands on. Their only source of air came from the mask’s two nostrils, so each breath was filtered through a bundle of medicinal plants, a vinegar-soaked sponge, or, in some cases, ground-up viper flesh.

This may have minimized contact with aerosolized droplets from coughs and sneezes (though, as is the case with modern medical masks, the patient being examined probably would have gotten more protection than the doctor donning the device). But 16th-century physicians didn’t know about that kind of germ transmission—and the bubonic plague is almost always transmitted via an infected flea bite, not from person to person. So what were these fowl physicians afraid of? Foul air. Instead of avoiding bacteria, they were working to avoid the “bad miasma” they believed caused illness. Listen to this week’s episode to learn more about this antiquated (and stinky) theory of disease.

FACT: Too much migraine medication can turn your blood green

The past few weeks have been anxiety and stress-inducing, to say the least. As I’ve done my part in social distancing, I’ve also found myself stuck in front of a computer screen for far too long. This much screen time, together with such little time spent outdoors and the overall heaviness of current events, recently landed me with a massive migraine.

As the day progressed and my trusted OTC pain relief products failed me, I spent the rest of the afternoon in search of relief—and landed on a most peculiar medical case report that I couldn’t pass up the chance to share.

It turns out that, in rare cases—as in, this was the only report I could find—taking too much sumatriptan (also known by its brand name as Imitrex) can turn your blood green. Chemicals within the drug build up in your bloodstream to change the hue of your (usually) red blood cells to a dark forest shade.

Don’t fret if you take sumatriptan for migraines: It’s highly unlikely that a prescribed dose could come anywhere close to turning you into Shrek. Listen to this week’s episode for more on the bizarre medical phenomenon.